My apologies that posting has been a little slow over the past couple of days. The bad part about working for myself is that I hate my boss. After scrambling like mad to meet a couple of deadlines earlier this week, Worker Nate basically decided to go on a sit-down strike against Boss Nate.

The big news of the day is the letter sent by a “gang” of six “bipartisan” senators (there was a sale on scare quotes at Target today) urging Harry Reid and Mitch McConnell (and by implication, the White House) that “taking additional time” on health care would be advisable. It’s easy to read the letter cynically: “later” in senate speak quite often means “never”. That might be particularly so on health care: odds are, frankly, that the Administration will continue to lose political capital until the unemployment rate improves, which even if a recovery in GDP growth is around the corner (which many economists think it is) is liable to take some time. Push this debate back to the autumn, and the effort could be being lead by a President whose approval ratings are in the low 50’s or perhaps even the high 40’s.

What’s interesting, though, is who exactly is in this “gang”. Five of the six are whom you’d expect: three conservative Democrats (Liberman, Landireu and Ben Nelson) and two liberal Republicans (Collins, Snowe). But then there’s Oregon’s Ron Wyden, who is not particularly conservative and in fact is usually thought of as being rather liberal.

Wyden, as you may know, has his own version of health care reform, which is entitled the Healthy Americans Act (HAA). The HAA is, in some ways, a more radical restructuring of the health insurance system than any of the other plans currently being contemplated by the Congress. It would completely remove the benefits tax exemption, create a national health insurance exchange (which would be open to everyone including those who opted out of their employer-provided coverage), and set some rather explicit cost-containment targets. I’m on record as being a fan, as are a lot of health care policy wonks like Ezra Klein. The interesting thing about Wyden’s bill is that it has co-sponsors from all over the political spectrum: not just centrists but also fairly liberal Democrats like Jeff Merkley, Ted Kaufman and Daniel Inouye, and rather conservative Republicans like Idaho’s Mike Crapo and Utah’s Dick Bennett. If we plot the 100 senators from most liberal to most conservative (as determined from DW-NOMINATE scores), support for the HAA seems to be somewhat randomly distributed throughout the population: 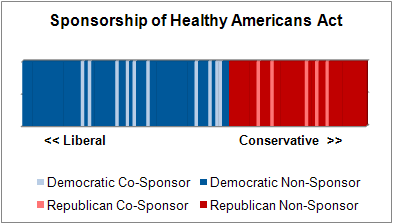 It’s very rare to see something like this and a reflection of the fact that Wyden’s plan cannot easily be characterized as either liberal or conservative … it’s just different.

But what’s this have to do with the letter that Wyden and his colleagues sent today? It’s not immediately clear. While three of the six “gang” members (Wyden, Lieberman, Landrieu) are sponsors of Wyden’s bill, the other three (Snowe, Collins, and Ben Nelson) are not.

My guess, though, is that Wyden wouldn’t have signed onto this letter unless he thought there was a real chance to marshal support for his bill. And my guess is that the other five signatories probably understood that.

It’s actually not completely clear that the Senate can’t find 60 votes for the HELP Committee’s bill once push comes to shove (much less 50). But those votes certainly won’t be had easily, and Wyden’s bill arguably represents an easier path. It begins with five Republican co-sponsors (Bennett, Crapo, Judd Gregg, Lamar Alexander and Linsday Graham) and would probably have little difficulty getting Snowe’s and Collins’s votes as well. The downside is that there might be a dozen or so Democrats who are extremely reluctant to touch the benefits tax exemption, which some of the AFL-CIO unions like AFSCME are very protective of. So the White House would either have to make some phone calls or find a few more Republicans to support the Wyden bill.

Ultimately, though, this presents an opportunity to find a bipartisan solution that doesn’t have to be a compromise solution — a lot of smart, progressive folks think Wyden’s bill is better on its face than the “traditional” versions that have been drafted by the House and the Senate, much less what those versions will look like after they’ve been through the meat-grinder of the Senate floor. The White House doesn’t need to take more time on health care: it may simply need more votes. Especially after this letter today, it ought to at least be actively considering whether Wyden’s bill is the way to get them.