Earlier today I tweeted about how there wasn’t enough evidence to describe the Massachusetts special election as a “toss-up”, as some other forecasters have done, based on the information available to us at that time.

Well, now there’s some new evidence. And it isn’t good for Martha Coakley.

In particular, the evidence is a Suffolk University poll that shows the Republican, Scott Brown, ahead by 4 points, 50-46.

Suffolk is a fairly average pollster, and I’m sure if we looked long and hard enough, we could develop some critiques of the poll. But there are no particular red flags and … c’mon, let’s not be silly, because there are a lot of other polls that you’d also have to critique in order to discredit the notion that the race is too close to call, including the PPP poll that showed Brown up by one point a week ago (since which time he’s almost certainly gained ground), the Rasmussen poll that showed a 2-point race for Coakley, and Coakley’s internals, which reportedly have shown her ahead by just 2-5 points. Look at what we get when take a simple linear trendline of all public polls conducted since the start of the year, excluding all published and rumored internal polls. 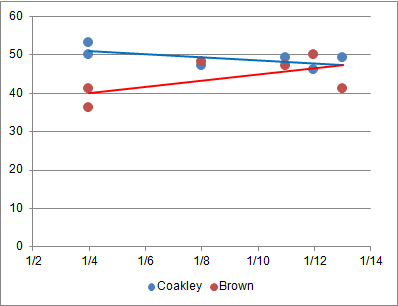 That’s a toss-up, ladies and germs! Both candidates are tied at 48 percent on the nose.

You can still argue that Coakley is favored — and I might even believe you. Hell, I might even wind up making that argument myself. But at this point, you can’t really cite the public polling as a data point in favor of your argument.

EDIT: By the way, here’s that same graph without the Suffolk poll — it would have had Coakley favored by about 4 points, which was my impression of the race as of this afternoon. 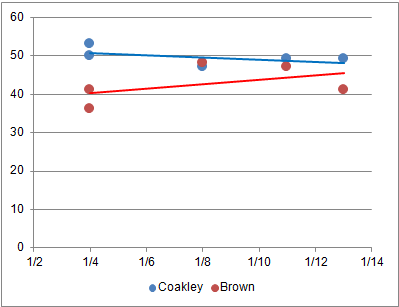 In other words, I don’t think that I’m overreacting (although I’m sure I’ll get accused of it in the comments). There aren’t that many polls, so adding another one can indeed make a fair amount of difference in the way that we evaluate the race.