A Quinnipiac poll today has Barack Obama’s approval rating tanking in Ohio: he’s now at 49 percent approve and 44 percent disapprove in the Buckeye State, according to Quinnipiac, whereas back in May, they had him at a healthy 62-31.

Obama’s approval ratings have declined nationwide by perhaps 3-5 points since early May. I have little doubt that this has mostly to do with the flagging economy. Each day, a few more voters are going to blame Obama for the economic troubles that we’re in. If the economy seems to be showing some “green shoots”, as it did in March and April, then Obama will be fine — voters don’t expect the economy to turn around overnight. But if the economy isn’t showing any signs of life — and most of the economic news for the past 45 days or so has been pretty grim — he’ll fail to keep pace with those modest, but ever-increasing, expectations, and his approval ratings will decline.

Ohio, of course, has suffered more than most states from the recession. It’s employment rate, at 10.8 percent in May, is the eighth-highest in the nation, and has increased by 3.5 points (and counting) since Election Day:

States with Largest Increases in Unemployment Rate since November 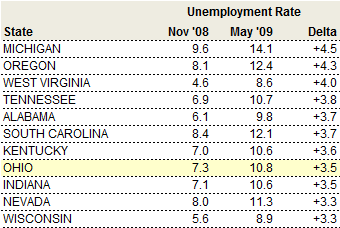 What Ohio hasn’t done, though, is suffer uniquely from the recession. It doesn’t have it nearly as bad as its neighbor, my native state of Michigan, where unemployment is now at 14.1 percent. And what are Obama’s approval ratings like in Michigan?

Not so bad. A Rasmussen poll in mid-June put Obama’s approval there at 59-39, including 39 percent strongly approving (and remember, Rasmussen has tended to have very bearish numbers on Obama overall). An EPIC-MRA poll of Michigan in late May, meanwhile, had 61 percent rating his job performance as “excellent” or “pretty good”.

The point is not that Obama’s approval ratings aren’t suffering because of the economy, nor that they might not be suffering more in states where the economy is worse. (Whoa, too many double-negatives there). I just doubt that there any problems Obama has that are so unique to Ohio that you wouldn’t also see them manifested in Michigan or Pennsylvania (where Obama’s approval numbers have also generally been fine). As such, I think the headlines this poll has generated have been a little overwritten. It’s not that, “Oh no, Obama is going to lose Ohio in 2012!”. It’s more just another indication that voters won’t have an infinite amount of patience with Obama on the economy, and if by 2012 the economy still hasn’t improved (in which case, we’ll be referring to the recession as “GD2“), or has double-dipped, or has improved sluggishly at the cost of a huge run-up in the national debt, Obama is going to be in trouble in Ohio as well as most of the other 49 states.