It’s known as “OFA 2.0.” “Obama for America” was 1.0 – the vast grassroots-powered organization tasked with electing Barack Obama president. “Organizing for America” is the 2.0 version, and its primary goal is to harness energy and momentum built during the campaign and keep it active and engaged to promote Obama’s policy agenda during his presidency.

On a warm, blue-skied Saturday February afternoon, I gathered along with 35 other people at Yvette Lewis’ house in Bowie, Maryland for an incredibly well-structured “stimulus party.” Approximately 2/3 were women, the majority African-American, and nearly all over age 30. 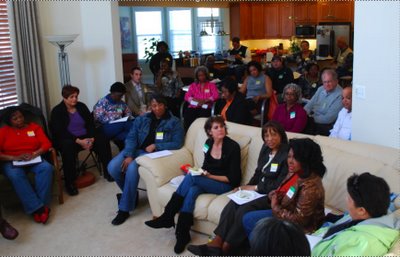 Over the weekend, mixed reports filtered in around the country about the success or failure of approximately 3,300 Organizing for America economic stimulus house parties. McClatchy apparently went to the OFA website, did some counting of signups, called a few hosts, and deemed the effort “not much of a draw.” The Atlanta Journal-Constitution noted a canceled meeting, got a quote from OFA 2.0 Director Mitch Stewart and a political science professor, and dismissed the organization as “tapped out.”

Reports from San Jose, Austin, and Tampa, along with a Reuters article posted early this morning were better, painting a picture of local meetings that reporters there actually attended. The only downside I have to report is that not all meetings were equally receptive to press attention. The hostess of one well-attended party in Virginia on Sunday asked me not to come for fear that comments wouldn’t be “polished,” and over fears that some guests being quoted over others, or some saying the wrong things would foment problems within the group.

Economically, the Bowie house party took place in a well-off suburban setting, but there was a socioeconomic range among the attendees. Some, like Nannette Johnson, had recently lost jobs and spoke of children who had lost jobs. Most were Democrats, but a few were independents and “Obamacans.” Many knew each other, most were local and had volunteered out of the Largo, MD field office during the campaign, but one woman, Tricia Barnett, had driven nearly two hours from St. Mary’s County in southern Maryland “to be part of an active group.”

Yvette Lewis played host and ringleader, and right off the bat she announced that this wasn’t just a party, but “a working session.” Most importantly she explained, while Lewis would provide the space and the meeting structure, the concept wouldn’t work unless all took ownership, and all took action. Working together and feeding off each other’s energy, individuals would make choices and ultimately do the work themselves.

The group was particularly unhappy with newly-elected Rep. Frank Kratovil, one of the tiny group of House Democrats to vote against the stimulus. Kratovil, one of the 2008 House Democratic pickups, had squeaked by in a race whose outcome was not officially confirmed until days after the election. Several of the attendees, who had pounded the pavement to help him get elected in a traditionally red Maryland district, gasped with shock when they learned of his vote.

“After all the work we did?” one frustratedly interjected. Lewis had called Kratovil’s office for an explanation of his stimulus bill vote and gotten an unsatisfyingly boilerplate reply. So now Kratovil was in the group’s sights as a lobbying target.

Vanessa Davis, who Lewis described as critical to the Largo field office’s success during the campaign, echoed Vanderpool on staying plugged in her intention to “get good information, be an activist, continue to have Barack’s back.”

“I was fired up then and I’m fired up now,” Toni Byrd agreed. “My whole goal here is one of hope, and a trust that we can continue the momentum that we started.”

After attendees shared their stories, and the meeting’s organizers had distributed a barrage of information-packed handouts, the large group broke out by interest area into subgroups to brainstorm over line items in the economic recovery bill. The task was focusing on the items stripped by the Senate in Friday evening’s deal, discussing which items most deserved inclusion in the ultimate bill, and presenting their report to the at-large group, including specific action items.

Proposed subgroups included Energy, Science & Technology, Transportation, Education, Health Care, Jobs (retraining) and Public Sector Jobs (teachers, firefighters, etc.). In practice, the latter two were combined and Energy did not have a subgroup representation. I dipped in and out of several subgroups as they debated which bullet-points targeted for proposed stimulus spending had the most merit.

For example, the five subgroup members for “Science and Technology” pored over a handout listing 17 specific stimulus proposals in that area, and decided that the top two priorities were the $6 billion in broadband and wireless grants for underserved communities and $600 million for National Oceanic and Atmospheric Administration satellites and sensors. Other options included monies for NSF, NIH biomed research, NIH university facilities, CDC facilities, NASA, the Dep’t of Energy, etc. 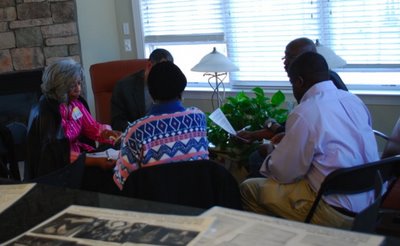 When they reported back to the group at-large, the subgroup’s chosen representative, Eugene Clair, explained their decision and reported the citizen lobbying they planned to ensure these items weren’t cut from the final bill. Not only letters targeted to Maryland legislators such as Hoyer, Dutch Ruppersberger, Kravotil, Cardin, and Mikulski, but letters to the editor (local and national papers) and media. (At the outset of the meeting, Lewis had instructed everyone to put listed numbers for CNN, MSNBC and Fox News into their speed dials.)

The Health Care subgroup – the largest subgroup with 11 members – decided that $3 billion in prevention and wellness fund dollars wasn’t as immediately stimulative as $1.5 billion in Community Health Centers would be, so they planned to make their legislative and media contacts focused on this specific item. The group noted the unfunded backlog 400 submitted applications for new and expanded sites, and observed that construction jobs would be a significant and stimulative ancillary benefit to this line item.

In terms of next steps, whenever an individual or subgroup had completed an action item, they were to email blast the rest of the group. When they got a response, they were to blast the group. The intention is to advocate for specific elements in the stimulus, generate further involvement from friends, co-workers and community members, and, over time, learn what works best until they develop strong efficiency.

Ironically, for the sake of time, the video presentation from Tim Kaine that headlined most media discussion of these stimulus house parties, was punted to the end of a gathering that truly lived up to its “working session” billing. As Kaine’s message played in the background, attendees mostly stretched and said goodbyes, full of mission and prepared to meet again in a month.

From the beginning, a close-to-the-vest gathering of several hundred elite Obama organizers and volunteers we shadowed at the O’Hare Westin December 5-7, 2008, OFA 2.0 has been a work in progress. Nobody’s tried anything like this before. Much as the campaign learned best practices during the many primary test cases and implemented what worked and ditched what didn’t, the post-election grassroots effort should be expected to have fits and starts, mirroring Obama’s frequent expectation-setting rhetoric on the difficulty of change.

There is much more to write about this process, which we’ll develop in upcoming pieces. In particular, the upcoming rollout of field hires the DNC intends to place in all or nearly all 50 states, the way this structure is directed by Obama’s agenda and enhanced by videos from Obama to the grassroots yet theoretically not under White House control but a special “project of the DNC,” and how the organization grows and learns over time. And ultimately with this unprecedented project, will it be successful? The potential is huge, and is clearly flying under the radar and being taken lightly by too many.

Curtis Valentine, a regional field director during the campaign who also attended Saturday’s 2+ hour meeting, summarized the spirit behind OFA 2.0 that manifested throughout in Bowie:

“We’re vested in the campaign, it’s not just something where we’re just bystanders. We’ve put sweat equity in bringing this campaign to fruition. The real campaign started on November 4… A lot of us here have paid so much into it and we want to see the rewards are reaped.”