Following another day of strong polling on Tuesday, Mitt Romney advanced into the best position in the FiveThirtyEight forecast since the party conventions. His chances of winning the Electoral College are now 28.8 percent in the forecast, his highest since Aug. 29. For the first time since Aug. 28, President Obama is projected to win fewer than 300 electoral votes. And Mr. Obama’s projected margin of victory in the national popular vote — 2.0 percentage points — represents the closest the race has been since June 27.

The forecast model is not quite ready to jump on board with the notion that the race has become a literal toss-up; Mr. Romney will need to maintain his bounce for a few more days, or extend it into high-quality polls of swing states, before we can be surer about that.

But we are ready to conclude that one night in Denver undid most of the advantage Mr. Obama had appeared to gain in September.

In contrast to Monday, when Mr. Romney also made gains in the forecast but mostly because of an especially strong poll from Pew Research, his uptick on Tuesday was a result of a wider volume of evidence.

We entered 16 polls into our database Tuesday that provided for a direct comparison to surveys that the same polling firms had conducted before the debate (but after the party conventions). 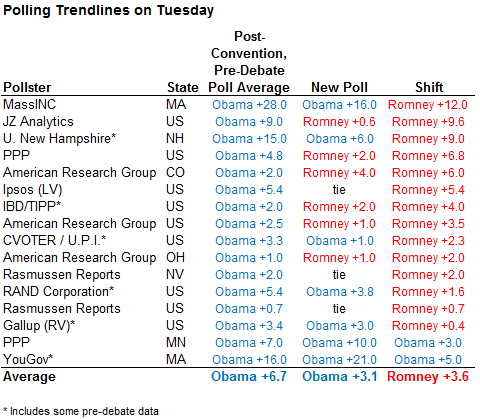 The magnitude of Mr. Romney’s bounce in these polls was varied: there was as much a 12-point gain for him in one survey, while Mr. Obama actually gained ground in two of the 16 polls. But on average, Mr. Romney’s gain was 3.6 percentage points.

National tracking polls had initially seemed to be suggestive of a slightly smaller bounce for Mr. Romney — more like two or three percentage points, although some of the trackers still contain a bit of predebate data. But the nontracking polls have generally weighed in on the higher end of that range.

The FiveThirtyEight “now-cast” now pegs Mr. Romney’s bounce as being 3.1 percentage points, compromising between the trackers and the broader group of polls. In addition, Mr. Romney had appeared to gain about one percentage point on Mr. Obama before the debate, so his overall standing has improved by almost four points in October.

However, the “now-cast” put Mr. Obama ahead by about five percentage points in advance of the debate, meaning that Mr. Romney’s gains are not quite enough to have erased Mr. Obama’s advantage entirely.

The strongest evidence that the race is a true dead heat right now is from national polls. The 10 national polls that we added to our database on Tuesday showed an exact tie between the candidates, on average.

Mr. Romney’s numbers are just slightly weaker in the majority of swing state polls, however. In the day just after the debate, Mr. Romney led in five of six polls between the top nine “tipping-point states,” but Mr. Obama has led in 10 of 14 such polls since then.

This slight difference between the state polls and the national polls is nothing new; it has persisted for much of the cycle. It’s not that Mr. Romney’s bounce has been smaller in the swing state polls so much as he started from further back to begin with.

The forecast model seeks to use the national polls and the state polls in a holistic way. On the one hand, the model adjusts the projections in each state based on the overall trend it perceives in national polls and in polls of other states — even if there were no new polls of the state that day.

Mr. Romney became the slight favorite in Florida on Tuesday based on this procedure. There have been no new polls of Florida since Thursday. But because Mr. Romney has made an overall gain in the forecast since Thursday, and because Florida was very close even before the conventions, the model infers that he probably has a slight edge there now.

The flip side is that the model also uses state polls to calibrate its estimates of where the national race stands. The popular vote forecasts that you see at FiveThirtyEight represent a compromise between an average of national polls and a “bottom-up” approach of adding up the projections from individual states. Although the national polls alone are in fact consistent with a nearly tied race, the state polls are more consistent with a race in which Mr. Obama still holds a very modest lead.

For the time being, the weakest link in Mr. Romney’s case is from the higher-quality swing state polls, which often showed Mr. Obama with a lead in the neighborhood of six percentage points before the debate.

A CNN poll of Ohio on Tuesday showed Mr. Obama with a four-point lead there, or three points with third-party candidates included. I think people are making slightly too much of this survey; it’s just one poll, and the polling has been unsettled enough that we’ll want to wait for it to stabilize some before we talk about either candidate having an Electoral College firewall. Shifts in voting behavior between each state are usually more alike than they are different.

At the same time, there has been a paucity of these high-quality state surveys since the debate. The forecast model should react pretty aggressively if the next round of them are suggestive of a tied national race, although it could also shift back to Mr. Obama if he continues to hold leads in the polls.

Gallup also had one piece of encouraging news for Mr. Obama on Tuesday, however. Among registered voters, Mr. Obama has polled five points ahead of Mr. Romney over the past two days, after being tied with him in the three days immediately following the debate. (Gallup did not publish comparable results among likely voters.)

So far, the evidence that Mr. Romney’s debate bounce is receding is a bit anecdotal. Indeed, this case seemed a bit clearer a couple of days ago. But it is a plausible hypothesis; a fre
sh round of swing state polling could help to settle the question.