The conventional wisdom about this year’s presidential race is that it has broken out of stasis to become wildly unpredictable.

And yet, after a period of polling turmoil following President Obama’s convention in Charlotte, N.C., and Mitt Romney’s sharp rebound after the first presidential debate in Denver, the polling in most swing states now looks very similar to the way it did for much of the late spring and summer.

When we introduced this year’s FiveThirtyEight forecast model on June 7, the closest states were Colorado, Ohio and Virginia, each of which slightly favored Mr. Obama. In Florida and North Carolina, meanwhile, we had Mitt Romney listed as a modest favorite.

Pretty much the same could be said about the race today. In fact, our projected leader in all 50 states is the same as it was at our launch of the forecast in June.

The table below lists our projected results in the 18 states (and one Congressional district, in Nebraska) that were predicted to produce a single-digit race as of our original forecast in June. On average, our projection of the popular vote in each state has moved by just one and a half percentage points, in one or another direction, since then. 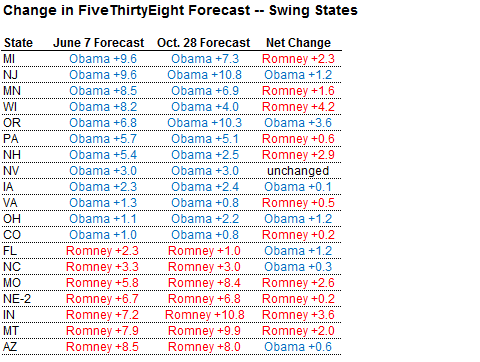 The change has been especially small in several of the most important battleground states. In June, Mr. Obama was projected to a 3-point lead in Nevada, a 2.3-point lead in Iowa, a 1.3-point lead in Virginia, a 1.1-point lead in Ohio and a 1-point lead in Colorado. The forecast in those states has moved just four-tenths of a point since then, on average; the largest shift has been in Ohio, where Mr. Obama’s polling has been reasonably resilient and he now has a 2.2-point edge.

Which states have shown more movement? Wisconsin, clearly, became more competitive after Mr. Romney’s selection of Representative Paul D. Ryan as his running mate. Mr. Obama enjoyed a more comfortable margin in New Hampshire in June than he does now. And in Indiana and Missouri, two states that are ordinarily red-leaning but which might qualify under a broad definition of swing states, the campaigns have spent few resources and polls there have gradually drifted toward showing a clearer edge for Mr. Romney.

The states where Mr. Obama has made gains since the June forecast are fewer in number (although the fact that Ohio is among them makes Mr. Obama’s electoral math stronger). Mr. Obama is running slightly stronger in Florida now than he was in June, although that still reflects a disappointment for him since he was leading in our forecast there before the Denver debate. Mr. Obama has also made gains in Oregon and New Jersey, counterparts to Indiana and Missouri in that they might have become competitive had Mr. Romney made more of an effort to contest them, but Mr. Romney did not do so.

In blue states, Mr. Obama’s numbers are little changed on average from the June forecast. New York is one exception; polls there have shown an especially large lead for Mr. Obama, larger than we originally predicted. And Mr. Obama might have to settle for a single-digit margin of victory in New Mexico, but he is in little danger of losing it. 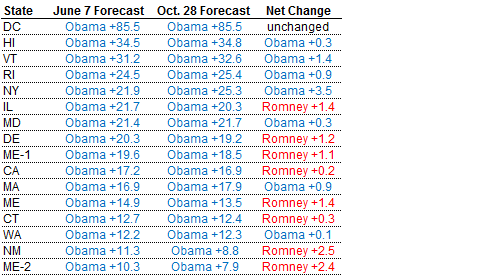 It’s in deeply red states where the forecast has shifted more. On average, Mr. Romney has gained two percentage points since June between the red states you see in the chart below. 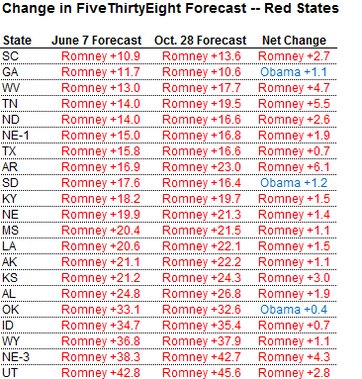 Could the race really have been this stable? Part of it is in the way the FiveThirtyEight forecast is constructed, since it uses nonpolling factors in a state (like its past voting results, relative to the national mean) in cases where the polling is sparse, helping to avoid unwarranted fluctuations based on one or two outlier polls.

But consider this interpretation of events. Prior to the Democratic convention, Mr. Obama’s favorability ratings exceeded his approval ratings by several points. The voters who took a favorable view of Mr. Obama but had lukewarm views of his performance may have represented easy targets for the president, and they were brought into the fold by the strong speeches given by Bill Clinton, Michelle Obama, and Joseph R. Biden Jr., who praised Mr. Obama’s accomplishments. After the convention, Mr. Obama’s approval ratings caught up with his favorability ratings, and his performance in horse-race polls against Mr. Romney improved as a result.

If Mr. Obama won over his share of Democratic-leaning undecided voters in Charlotte, however, Mr. Romney claimed most of the Republican-leaning ones after Denver. That event precipitated a sharp improvement in Mr. Romney’s favorability ratings as voters saw him share the stage with Mr. Obama, and appear competent, confident and presidential.

Some other truly undecided voters may have jumped on the bandwagon along the way, favoring Mr. Obama after Charlotte but Mr. Romney after Denver based on the momentum they perceived in the race. However, their support may be inherently fickle; Mr. Obama now appears to have regained roughly a percentage point of the support he lost after Denver, which may come from this group. (It may also be that the magnitude of the respective bounces was slightly exaggerated in the polls because of the tendency of more enthusiastic voters to respond to surveys.)

The national polls certainly look different than they did in June, but part of that may be artificial as well.

In June, many of the national polls were conducted among registered voters rather than likely ones. In national polls that have reported both registered-voter and likely-voter results throughout the course of the year, Mr. Romney has run about three points stronger in the likely-voter version, on average. (Interestingly, this difference is smaller in state polls, where the difference is about two points on average.)

Some of what looks like movement toward Mr. Romney in other polling averages instead reflects pollsters switching to their likely-voter models. The FiveThirtyEight model, since its design converted registered-voter polls into likely-voter ones from the start, will recognize that a change in methodology is different than a new trend in the race.

This change has been less pronounced at the state level, since a larger fraction of the state polls were reporting likely-voter numbers to begin with. We alerted you back in August to the pr
ospect that the different-seeming results between state and national polls would become more apparent as more national pollsters flipped over to their likely-voter models.

Of the remaining gains that Mr. Romney has made in national polls, much of it may have come from his improved performance in deeply red states; that is where our state-by-state forecasts show his numbers improving the most. It might be kept in mind that, during the Republican primaries, Mr. Romney’s performance was strongest in states and counties that are Democratic-leaning in general elections, while being weaker in deeply red areas. As highly conservative voters became more comfortable with Mr. Romney, however, he made gains among them.

So sure, there have been some twists and turns along the way — but that is true in every presidential election. Anyone who thinks this race has been especially wild need only look at the polling trajectory in 1976, 1980 or 1992 to get a sense for what a truly variable presidential election looks like.

Over all, instead, this race has been fairly stable relative to most presidential elections. And especially in the state polls, the results we’re now seeing are quite consistent with what the economic fundamentals might dictate: a very tight race, narrowly favoring Mr. Obama.

There is always the chance that the race could be disrupted again over the final week of the campaign, perhaps because of the candidates’ responses to Hurricane Sandy. And there is the possibility that this will be one of those years where the polls miss the mark badly in one or another direction on Election Day.

There is a pretty good possibility, however, that our forecast in every state on Nov. 6 will be the same as it was on June 7. Colorado, Virginia and Florida, being the closest states in the forecast now, are the most likely to switch sides.

The polls released on Sunday were mostly unremarkable. The eight national polls showed about a tied race, on average, with each candidate gaining ground in some polls but losing it in others. 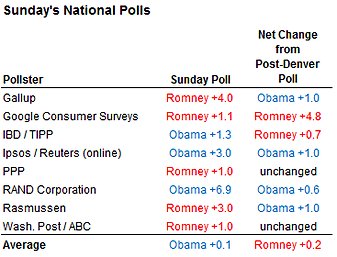 The state polls out on Sunday were slightly favorable to Mr. Obama, with polls by the firm Public Policy Polling showing him making gains in Ohio, Florida and New Hampshire. In another poll of Ohio, from Gravis Marketing, Mr. Obama held a one-point edge, versus a tied race before.

It should be noted that Public Policy Polling is showing a more pronounced shift toward Mr. Obama than any other pollster. Their polls were strongly Democratic-leaning at the start of the year, but then showed a poor run of numbers for Mr. Obama after the Denver debate, with their polls often being slightly more Republican-leaning than the consensus. Now, Mr. Obama has rebounded in their surveys, typically by two or three percentage points in the different swing states that they’ve polled, to the point that they now seem to be Democratic-leaning again by a percentage point or two.

Our forecasts adjust for these pollster “house effects” — whether pollsters are Republican- or Democratic-leaning relative to the consensus. But one innovation that we might consider in future years is to also apply an adjustment for the variance or “swinginess” in a poll. Some pollsters, like Public Policy Polling, American Research Group and Gallup, show more pronounced fluctuations. In others, like Rasmussen Reports and polls for the online firm YouGov, the numbers seem to move much less. There are sometimes logical reasons why these patterns occur — Rasmussen Reports, for example, weighs the results by party identification, which tends to dampen swings (if also potentially missing real changes in the electorate).

Still, there are now so many active polling firms, especially in states like Ohio and Florida, that one or two new polls won’t affect the forecast much. (In Ohio, Mr. Obama advanced only to a 2.2-point lead on the basis of the new surveys, as compared with a 2.1-point lead in Saturday’s forecast.)

Even in this last full week before the election, I’d encourage you to take a more macroscopic view of the election. We have seen, broadly speaking, a mild recovery for Mr. Obama over the past week or so in the polls. Among polls that have surveyed the race more than once since Denver, his numbers have improved more often than they have worsened in the most recent edition of the survey, and Mr. Obama’s predicted probability of winning the Electoral College has improved as a result (to 74.6 percent as of Sunday).

Then again, it may be best not to make too much of these mild fluctuations. There certainly seemed to the the possibility in a brief period after Charlotte that Mr. Obama would run away with the race, although even then forecast expected some reversion to the mean.

But other than in that convention bounce period, the polls have usually told about the same story: that Mr. Obama has a modest edge, but far from an insurmountable one, in the states necessary for him to win him 270 electoral votes.

The forecast model is a bit more confident now about Mr. Obama’s potential to turn that edge in to an Electoral College victory because there is so little time remaining in the race.

Still, an election held today would probably keep us up quite late before we knew the result with much certainty — and so, in all likelihood, will the one on Nov. 6.