With the election so close, Saturday is no longer a day of rest for pollsters. Eight polls were released from potentially competitive states: 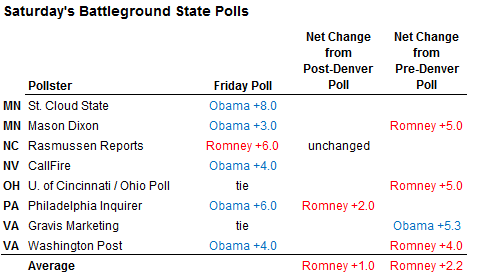 This is a diverse group of polls that does not really lend itself to a snappy summation. But let’s start in Minnesota, a state that we have given little attention this year.

There were two polls out in Minnesota on Saturday. One, from St. Cloud State University, gave President Obama an eight-point lead. But another, from Mason-Dixon for The Minneapolis Star Tribune, had Mr. Obama with a smaller lead of just three points.

Which of these polls represents the more likely state of play in Minnesota? The FiveThirtyEight forecast projects Mr. Obama to win there by 6.8 percentage points, meaning that it is somewhat closer to the St. Cloud State poll. Other recent polls, conducted after the first presidential debate in Denver, gave given Mr. Obama leads of margins between 5 and 10 points.

Mason-Dixon is a strong polling firm, but their results have been more Republican-leaning than the consensus in Minnesota and most other states. That does not mean its pollsters are a bunch of partisan hacks; they have a pretty good track record, and it is good for a candidate — in this case, Mitt Romney — when a strong polling firm consistently shows solid results for him.

At the same time, this context — what we call pollster “house effects” — is important to keep in mind. The odds are that if Mason-Dixon were to poll other states that they have skipped, liked Ohio or Virginia, they would also show reasonably strong results for Mr. Romney.

If Mason-Dixon’s hypothesis about what the turnout will look like is correct, then Mr. Obama is likely to have bigger problems than in Minnesota and may be the underdog. But the Minnesota poll does not necessarily present evidence that the state has moved all that much relative to other key states.

In other respects, however, it is surprising that Minnesota has not received more attention. In 2008, Mr. Obama won it by 10 percentage points — the same margin that he had in Iowa, New Hampshire and Pennsylvania, and less than his 14-point win in Wisconsin.

Part of the neglect in Minnesota almost certainly reflects the way the campaigns have been treating the state. There are periodic rumors and reports that Mr. Romney’s campaign is dabbling with the idea of buying advertising buys in Minnesota, but he and Republican-aligned groups have spent almost nothing there.

In 2008, by contrast, Republicans held their convention in St. Paul, and John McCain’s campaign made a considerable effort to contest Minnesota. It was one of the few states, in fact, where they sometimes outspent Mr. Obama’s campaign.

For all those efforts, Minnesota still wound up being a bit Democratic-leaning, since Mr. Obama’s 10-point win there exceeded his 7-point margin nationally. The state has gradually drifted from the left wing of American politics toward the center, but its Democratic heritage is hard to overcome.

This year’s polls show that Minnesota has been about five points more Democratic-leaning than the country as a whole. Perhaps a late effort by Mr. Romney’s campaign could bring it back to within three points of the national average, as it was in 2008. But it is questionable whether that would be a good use of resources, since Mr. Romney would probably win it only if he were performing strongly elsewhere, especially in the Midwest, and that would mean that he probably would have already accumulated 270 electoral votes. Minnesota, despite the new polls, has only a 1-in-500 chance of being the “tipping-point state“, according to the FiveThirtyEight model, meaning that its electoral votes would be decisive given how all the other states might line up.

The most consequential polls of the day were probably in Ohio and Virginia.

The Ohio poll was a good one for Mr. Romney. The survey, conducted by the University of Cincinnati for a consortium of Ohio newspapers, showed the tied race, 49-49, with almost no undecided voters left. The same survey had given Mr. Obama a 5-point advantage before the Denver debate.

Some liberals have critiqued the Ohio poll for being out of date — it was in the field between Oct. 18 and Oct. 23, meaning that some of its interviews were conducted before the final presidential debate in Florida.

I think this criticism is probably overdone. There is little evidence that the race has changed all that much since the final debate; the FiveThirtyEight model finds that Mr. Obama has perhaps gained half a percentage point nationally since then, but probably not much more than that.

And apart from the timing, the poll has a lot going for it: it has a good track record and collected a reasonably large sample size, meaning that it gets a lot of weight in the FiveThirtyEight forecast.

But the poll should not be used to imply that the race is tightening further in Ohio. There have been 12 other polls of the state that also conducted at least some interviews after the Florida debate, and they showed Mr. Obama up by two points there on average, which is about where the FiveThirtyEight forecast now shows the state. If a candidate holds a two-point lead in a state, it is normal for some polls to show him tied or trailing by a point or so instead in contrast to others that might put him four or five points up.

That is pretty much what we see in Ohio right now, with the edge in the polling average remaining with Mr. Obama. The new poll reduced his chances of winning the state to 73 percent from 76 percent in the forecast.

Other polls of Virginia this week have shown anything from a two-point lead for Mr. Romney to a five-point edge for Mr. Obama. Perhaps, along with New Hampshire, it has featured the least consistent polling of any swing state all year.

One critique I have seen of the poll is that it seems out of step with The Washington Post’s take on the national race. Their most recent national tracking poll, conducted with ABC News, gave Mr. Romney a one-point lead.

I agree with this question to some extent: it is unlikely that Mr. Obama will lose the national popular vote by one point while winning Virginia by four.

At the same time, The Washington Post is hardly alone among pollsters to show better results for
Mr. Obama in the swing states than in their national numbers. This is a pattern that we have been observing all year, and it seems to have become more pronounced recently.

There are three ways to resolve the conflicting numbers: they could reflect a pronounced advantage for Mr. Obama in the Electoral College relative to the popular vote. Or there are the more pedestrian hypotheses that get too little consideration, in my view: that the state polls might be overrating Mr. Obama’s performance, or alternatively, that the national polls might be underestimating it.

The FiveThirtyEight model accounts for all of these possibilities, in its own way. It does find that Mr. Obama is slightly more likely to win the Electoral College than the popular vote. But our method also lowers Mr. Obama’s projection in the states, while raising it in the national polls, because they are somewhat discordant with each other.

Still, Virginia is a state that Mr. Romney is having difficulty putting out of play. (The other poll published on Saturday, from Gravis Marketing, should not necessarily give comfort to Mr. Romney. It showed a tie in Virginia, but its previous poll had given Mr. Romney a five-point edge instead, having been an outlier at the time.)

Virginia now ranks second on our list of tipping-point states. It has a 15 percent chance of deciding the election — well behind Ohio’s 49 percent chance, but ahead of everything else.

Suppose that Mr. Romney were to win all the states where he is currently favored in the FiveThirtyEight forecast, including Florida and North Carolina, and that there are no major upsets in the blue-leaning states, with Mr. Obama winning Pennsylvania, Minnesota and Michigan. Then Mr. Obama wins Virginia. 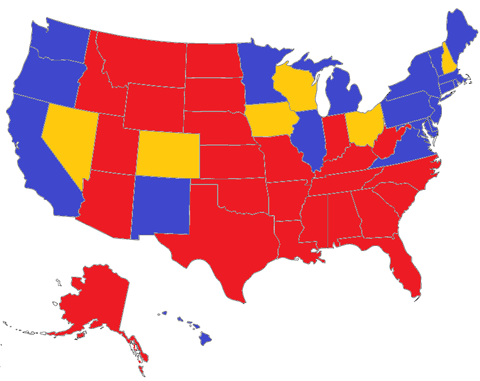 Mr. Obama could win the election by winning Ohio, plus any of the other five states. (Ohio alone would not quite suffice, bringing him to 268 electoral votes.)

The real value of Virginia to Mr. Obama, however, is that it would allow him more paths to victory even without Ohio.

For instance, if Mr. Obama won Virginia but lost Ohio, he could still win the election by carrying Nevada and Wisconsin — where he has a clearer edge in the polls than he does in Ohio — and then any one of the following states: New Hampshire, Iowa and Colorado.

The map below represents one of Mr. Obama’s more plausible winning paths that would get him to 270 electoral votes without Ohio. 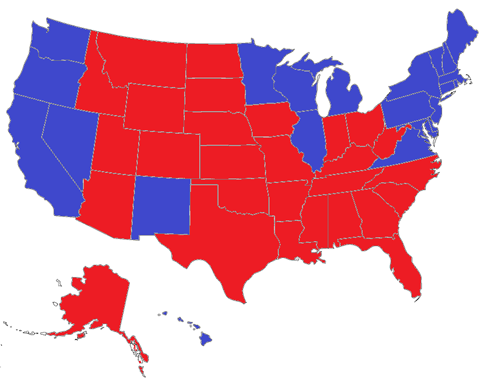 Over all, the stronger poll in Ohio for Mr. Romney slightly outweighed the poorer one for him in Virginia. His chances of winning the Electoral College inched up to 26.4 percent from 25.6 percent in Friday’s forecast.

A previous version of this post misstated the year in which President Obama won Minnesota by 10 percentage points. It was 2008, not 2010.