The FiveThirtyEight forecast is unchanged for Saturday, with President Obama maintaining a 67.9 percent chance of winning the Electoral College.

You’d have to stretch to find much in Saturday’s national polls that would change your view about the condition of the race. Mr. Obama gained ground in three daily tracking surveys — from Public Policy Polling, Investor’s Business Daily and United Press International — but lost ground in two others, from Ipsos and Rasmussen Reports.

The Gallup national tracking poll continues to diverge from the consensus and show a six-point lead for Mitt Romney among likely voters; Mr. Romney gained one point in the version of the survey among registered voters on Saturday.

Saturday’s battleground state polls provided for a bit more action, but some of the numbers aren’t quite as good for the candidates as they might appear on the surface. 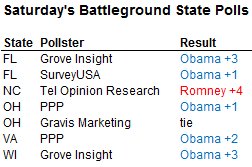 Polls by Grove Insight, for example, had Mr. Obama with a three-point lead in both Florida and Wisconsin. But Grove Insight has had strongly Democratic-leaning numbers in its recent surveys, and these polls are about what you might expect given that tendency.

A SurveyUSA poll showing Mr. Obama with a one-point lead in Florida is really the slightly better result for him. Even so, Florida has had some very dense polling, so it will take quite a lot of evidence to push the model much off its current take on the race there, which projects a win for Mr. Romney by about two percentage points.

If a candidate holds a two-point lead in the polling average in a state, it’s going to be pretty normal to see a few polls showing a tied race or his opponent up by a point or two, along with others that show him up ahead by a margin in the mid-single digits. That’s pretty much what we see right now among the higher-quality polls of Florida, with Mr. Romney retaining the overall advantage.

The best number of the day for Mr. Romney was almost certainly the Public Policy Polling survey of Ohio, which had him down by one point there — improved from a five-point deficit in a poll they conducted there last week.

If this had been the only poll of the day in Ohio, Mr. Romney would probably have made an Electoral College gain on that basis, since the forecast is very sensitive to anything in Ohio.

There was another Ohio poll, however, from Gravis Marketing, which showed a tied race. Isn’t that an even better result for Mr. Romney?

Not in this case, because Gravis Marketing polls have had a Republican lean of two or three percentage points this cycle. (Their prior poll of Ohio had shown Mr. Romney up by about one point.)

The FiveThirtyEight model adjusts for these “house effects” and so treats the Gravis Marketing poll as equivalent to showing a two- or three-point lead for Mr. Obama.

It also adjusts the Public Policy Polling survey of Ohio slightly downward for Mr. Obama — but Public Policy Polling has lost most of the strong Democratic lean that it had earlier in the cycle, and it has even been on Mr. Romney’s side of the consensus in a few states like Iowa and New Hampshire. We now calculate their house effect as being only about half a percentage point in favor of Mr. Obama.

Still, if Saturday’s polls were something of a wash, it’s also hard to make the case that the polls have moved much toward Mr. Obama since Tuesday night’s debate in New York.

Mr. Obama now holds a popular vote lead of one percentage point in the FiveThirtyEight “now-cast,” an estimate based on both state and national surveys. He led by 0.8 percentage points by the same measure before the debate.

Although many of the surveys that are influencing the forecast preceded the debate, meaning that it will take another day or two before we can close the book on its effects, at the very least it seems clear that Mr. Obama will not see anything like the sharp break toward Mr. Romney that followed the first debate in Denver.

A gain of two or three points for Mr. Obama in the polls, for instance, would very probably have become obvious by now. Perhaps the debate was worth a half a point or a full point for Mr. Obama — these trends would be more difficult to distinguish from statistical noise — but it probably wasn’t worth much more than that.

What makes this challenging is that although something like a half-point shift is hard to detect in the polls, it is also potentially meaningful given how late it is in the race and how close the contest is.

The most natural analogy might be to a baseball game. Scoring a run in the first inning is worth something, but it won’t shift the win probabilities all that much: there’s too much that can happen later on in the game.

We’re now in the political equivalent of the eighth inning, however. A run scored in the eight inning is potentially much more important than one in the first.

The reason I say “potentially” is that it makes a tremendous difference depending what the score is. In a blowout, the eighth inning won’t matter at all. A team down 9-1 is almost certainly going to lose; but so will one that gets a solo home run and trails 9-2 instead.

(The political equivalent: Walter Mondale, in 1984, improved to a 17-point deficit from a 20-point deficit in national polls after his first debate with Ronald Reagan. This may have helped him to carry his home state of Minnesota, and lose the Electoral College 525-13 rather than 535-3.)

But if the score is tied, or if it’s a one-run game, a run scored in the eighth will make a huge difference.

That’s where we find ourselves right now in the presidential race. This election is close and is likely to end up that way. There’s about a 50-50 chance that the election will end up within 2.5 percentage points, according to the forecast, against only a 15 percent chance that either candidate will win by five points or more.

For this reason, the percentage estimates in the forecast are likely to be volatile from here on out.

Early in the year, we’d treat as a pretty big deal if a candidate’s Electoral College win probability increased by a percentage point or more (for instance, to 63 percent from 62 percent). Now, changes like that are going to be fairly common, and there will often be larger shifts. Thursday, for example, was a good but hardly spectacular day for Mr. Obama in the polls, and that was enough to produce about a 5 percent swing toward him. Friday, however, brought a 2 percent shift back toward Mr. Romney, despite polling that seemed fairly mixed on the surface.

There are some other reasons the forecast is likely to become more volatile over these final two weeks. The FiveThirtyEight forecast is technica
lly a combination of a polling-based model and a “fundamentals” model based on economic statistics and Mr. Obama’s incumbency status.

The forecast is also designed, however, to weight the economic component less and less as time goes on, eventually defaulting to a purely poll-based model by Election Day. (The guiding principle behind this is simply that voters’ views of the economy should be priced into the polling by late in the race.) Although the economic component of the model is dynamic — it can change as new economic statistics are released — it is generally less volatile than the polling component. (While there have been some ups and downs in the economic numbers, nothing has changed the basic story of an economy that is recovering, but slowly.) So as the polling component comes to predominate, the overall forecast will become more volatile as well. 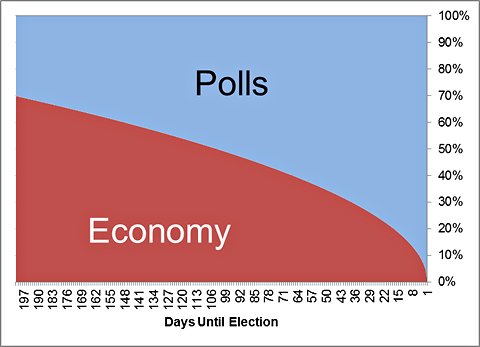 Also, the model is designed to be more aggressive about buying into a potential change in the polls in the closing stages of the race.

Most people’s intuition will lead them to overstate the volatility in the presidential race. Furthermore, they often do so for the wrong reasons — because they pay too much attention to one or two outlier polls rather than to the consensus evidence.

On the other hand, because we are often now getting 20 polls on a given day — instead of two or three — there is potentially more evidence to testify to a statistically meaningful change in the race if it is reflected in the polling consensus.

Furthermore, it is now late enough in the race that news events that produce what would ordinarily be a temporary “bounce” in the polls could carry forward to Election Day.

The writer Jazz Shaw joked recently, for instance, that he didn’t think Mr. Romney’s bounce from his debate in Denver would persist for more than another four weeks — just long enough, of course, that it might be enough to win him the election on Nov. 6.

Perhaps in some abstract sense, this is true. If Mr. Romney and Mr. Obama debated another 10 times, and the election were held next March, the Denver debate would be discounted by voters. But it won’t be such a distant memory when voters go to the polls in 17 days.