Perhaps it is the low expectations established by what has been an exceedingly rough couple of weeks for Democrats, but I was pleasantly surprised by Barack Obama’s State of the Union Address last night, which managed at once to recall why the majority of the electorate voted for him while at the same time demonstrating an awareness of the difficult situation in which the President now finds himself.

Nevertheless, subjective evaluations of Presidential speeches are notoriously useless. So let’s instead attempt something a bit more rigorous, which is a word frequency analysis of the terms that President Obama used last night. What did President Obama focus his attention upon and how does this compare to his predecessors?

To investigate, we’ll compare the President’s speech to the State of the Union addresses delivered by each president since John F. Kennedy in 1962 in advance of their respective midterm elections. We’ll also look at the address that Obama delivered — not technically a State of the Union — to the Congress in February, 2009.

I’ve highlighted a total of about 70 buzzwords from these speeches, which are broken down into six categories. The numbers you see below reflect the number of times that each President used term in his State of the Union address. 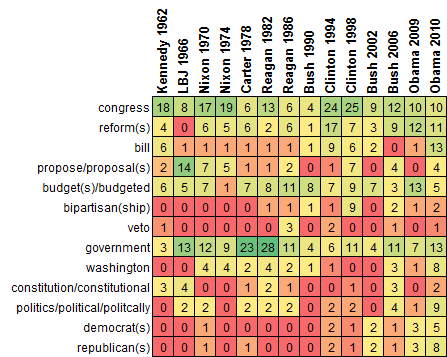 Obama engaged in a lot of process talk last night — a relatively frank discussion of the nature of the relationship between the two parties, and the political constraints that operate upon him. Particularly unusual was his use of various forms of the world “politics” — usually a no-no in speechmaking — as well as the terms “Democrats” and “Republicans”, which he’s used essentially as often as all of his recent predecessors combined. 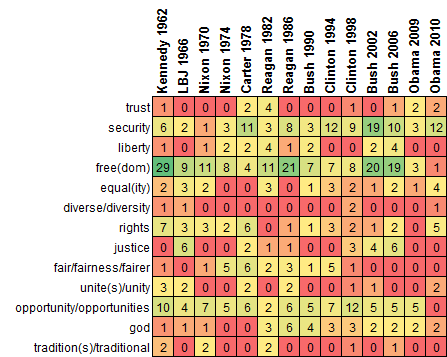 One reason that Obama’s speeches may come across as a bit aloof is that they are quite devoid of values buzzwords and particularly the terms “free” or “freedom”, which were among the more frequently employed words by most of his predecessors. He’s also failed to make use of one of Bill Clinton’s favorite hobbyhorses, which is the term “opportunity”. 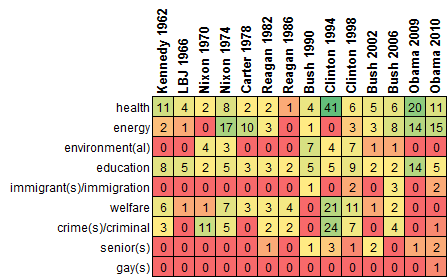 What’s striking here are not Obama’s numbers but Bill Clinton’s from 1994, in which he drilled down very deeply on several domestic policy initiatives. Under ordinary circumstances, it’s unusual for a President to lobby so intensely such specific domestic policy programs during the State of the Union — and at may not have served Clinton well considering the fate that the Democrats met in the 1994 midterms. Obama’s speech was more balanced in this regard. 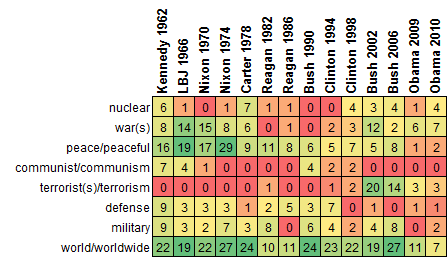 Here, we see the obsession of LBJ and Richard Nixon with the terms “war” and “peace”, almost always as related to the Vietnam War. Particularly in 1974 as the Watergate scandal was beginning to ensnare Nixon, his frequent repetition of the term “peace” reads almost like a plea for mercy. George W. Bush’s obsession with terrorism is also obvious here, not just in 2002 when it was at the forefront of everyone’s mind but also in 2006. Obama is more notable for his lack of emphasis on foreign policy and in particular his infrequent use of the terms “world” and “worldwide”. 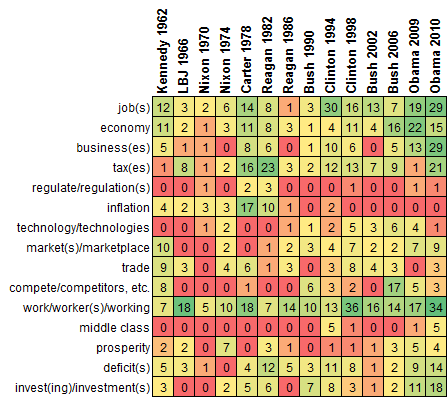 Rhetorically at least, Obama was exceptionally focused on jobs last night, using that term 29 separate times, and variations on the term “work” or “working” another 34 times. In this respect, he was quite similar to Bill Clinton, who also dealt less in abstractions about the economy and more in the question of jobs in particular.

Obama also used the term “tax” or “taxes” as often as any president since Reagan in 1982, mostly to point out (as I’ve argued was long overdue) that the stimulus package contained an enormous volume of tax cuts. Another obsession of the White House speechwriting department is the use of the terms “investing” and “investment”, which Obama used very heavily last night as well as in his 2009 address. 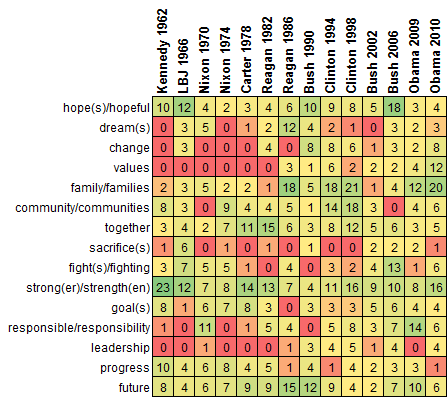 One way in which Obama quite explicitly invokes Clinton is in his frequent use of the terms “family” and “families”, which he used 20 times last night. He has yet to pick up on the Clintonian tic of using the term “community” constantly, on the other hand.

Contrary to popular belief, Obama does not talk about “hope” very often — indeed, he seems to have been conspicuously avoiding the word since having become President. He did use the word “change” eight times last night, however. Obama has ratcheted down the use of the term “responsibility” since last year’s address while increasing his use of less abstract (i.e. more emotionally impactful) words like fight/fighting and strength/strengthen.

One neat thing we can do here is to run a simple correlation on the 70 or so buzzwords that we’ve identified — which speech is most like the others?

Unsurprisingly, this analysis finds that Obama’s address last night was most similar to to his own speech from last year. But after that, it most invokes Bill Clinton’s two addresses, as well as Jimmy Carter’s in 1978: 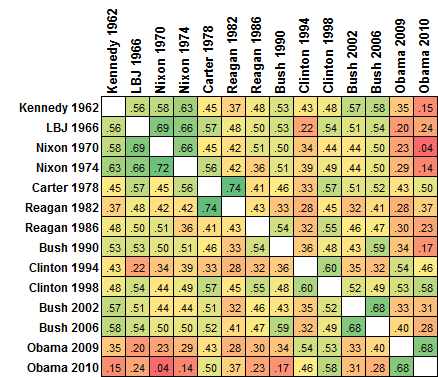 Perhaps this is the wrong way to go about this, however, since a lot of these numberrs are context-sensitive, dependent upon the particular crises that a President faces and the particular policies that he’s trying to advance. So let’s remove everything in the domestic policy, foreign policy and economic categories, and re-run the analysis, focusing more explicitly on the enduring themes of a President’s framing and rhetorical tics: 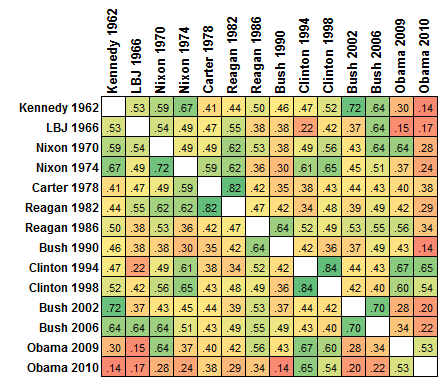 The correlation with Bill Clinton’s speeches increases further when we do this. What’s just as striking, however, is how dissimilar Obama’s State of the Union was to any predecessor apart from Clinton. The combination of process talk and populist rhetoric was rather unusual; Obama managed to reflect Clintonian populism while at the same time still sounding like himself.

Indeed, I think Obama at least potentially succeeded in achieving the goal that I set out for him, which was to re-brand himself in a way that reminded voters of the better moments of his campaign while at the same time displaying a sensitivity to the challenges that both he and the country now face.

It was just a speech, however, and most State of the Unions have had a fleeting impact, at best. And were I evaluating the speech on policy grounds, I would evaluate it more skeptically.

Nevertheless, it was a strong speech that ought to lift Democratic morale in the near-term. And in the medium-term, it reminds us that the Republicans’ recent momentum may not be the irresistible force that it seems. Their steadfast opposition to any and all policies — whether popular or not — carries its share of downside risk with such a rhetorically skilled President at the helm.