President Obama has backpedaled from part of a recent proposal to simplify the U.S. tax code, dimming hopes for broad-based tax reform and offering yet another reminder that constituencies (even small ones) that favor specific tax breaks will put up a fight to defend their benefits.

The controversial — and now dead — proposal concerned 529 plans, investment accounts that let families save for college expenses, like tuition and books, without paying capital gains taxes when the money is withdrawn. Obama wanted to limit the tax-free withdrawals from these plans, as well as phase out another smaller college savings program, as part of a set of changes to the tax code that would, in his words, “help middle-class families.”

The 529 program is relatively small — about 7 million families use such accounts. According to a 2012 report by the Government Accountability Office, 529 plans cost the federal government about $1.6 billion in forgone tax revenue in the fiscal year 2011. These numbers are infinitesimal compared with other tax expenditures (the exemptions, deductions and credits the government effectively treats as expenditures because they limit tax revenue). 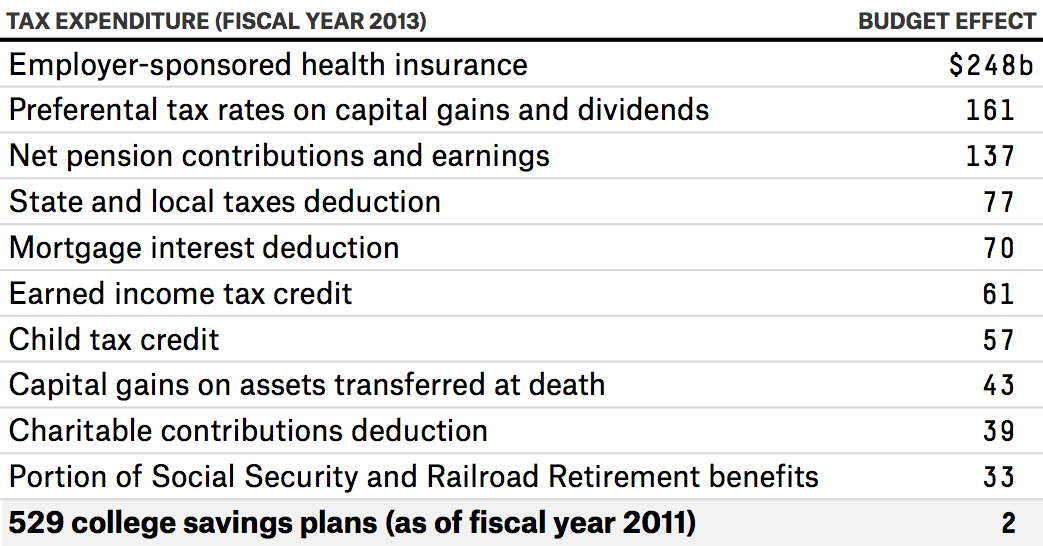 Take the mortgage interest deduction, for example. Homeowners can deduct some of the interest they pay on their mortgages from their tax bills to the government. This costs the government about $70 billion per year in foregone tax revenues — or about 44 times more than the 529 plans cost.

The lesson: If politicians (from both parties) are lobbying the president to drop his plan to simplify a program that amounts to less than $2 billion a year, then the much bigger tax expenditure programs are effectively untouchable.

That’s a problem because, as pretty much everyone agrees, the tax code is too complex. Many proposals for tax reform are modeled on the Tax Reform Act of 1986, which was able to lower tax rates by limiting tax breaks (that is, the types of tax expenditures outlined above).

But when even small tax breaks have their vociferous defenders, it’s that much harder to simplify and improve the tax code.