The general is away, but the troops are at battle. If Barack Obama isn’t coming to rain-soaked Georgia, his ground organization is very much here. In addition to the existing Georgia organizing infrastructure that has stayed on board, at least fifty outside organizers showed up in Georgia within a few days of November 4. The mission: to help Democrat Jim Martin in his U.S. Senate runoff against incumbent Saxby Chambliss. More organizers arrive each day. They’re young — but they’re veterans — and they’ve jumped right in.

In other parts of the country, including northern and southern California, Obama organizers run phone banks into Georgia on Martin’s behalf. So many organizers have flooded in that in Savannah yesterday, the candidate himself mistook us for organizers and thanked us for coming down. 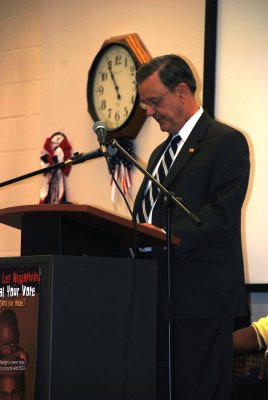 Ohio’s organizers, in particular, have a special relationship with Georgia. When Obama pulled a number of his staff out of Georgia during the general election, a large percentage of that group headed to the Buckeye state, and anyone in that category has returned on paid staff under Georgia’s Campaign for Change.

Martin has ground to make up in the race; on November 4, Chambliss narrowly missed the 50% mark that would have given him an outright win. Instead, Chambliss and Martin will vie on Tuesday for one of the two undecided Senate seats in a runoff election that has drawn larger-than-usual national attention due to still-live Democratic hopes to reach a symbolic 60-seat caucus.

Barack Obama’s choice not to visit the state personally has come under criticism. John McCain, Rudy Giuliani, Mike Huckabee, Mitt Romney, Newt Gingrich have all visited the state for Chambliss, and Sarah Palin will be stumping four times for the Republican on Runoff Eve. Jim Martin has had Al Gore and Bill Clinton stump for him, but the big missing name is Obama.

Different theories abound, but the simplest explanation is Obama is unwilling to squander any perception of strength this immediately into his term as President. (Technically, Obama will be sworn in January 20, 2009, but nobody disputes that an impotent George Bush has essentially curled into a fetal ball in the face of the massive economic crisis and that Obama is acting as de facto President.) Fairly or unfairly, if Martin fails to pull off the upset in red Georgia, Obama’s “mandate” would come under question. It’s a hard risk-reward calculus, especially for a Martin team that believes an Obama appearance would be extremely helpful, but it’s the reality. 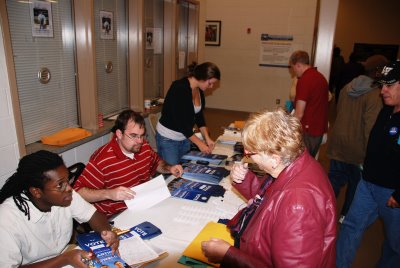 At the human level, there is almost a wistful, gravitational pull for many of these organizers in returning to a race. To work on the Obama campaign, these folks had to disconnect from their previous lives. Friendships, relationships, and other plans all took a backseat to the single-minded mission to elect Barack Obama. Plugging back into the world, especially when job plans for most of these twenty-somethings are uncertain, is a difficult task. While the pride is evident, conversations with many of these organizers reveals a strange sense of feeling lost, untethered from an all-consuming routine. So when organizers hear other organizers are coming to Georgia, it’s a form of therapeutic reunion for many, much like a reunion of military veterans. Unless you’ve been through it, it’s hard to explain.

The Martin campaign has 25 field offices in the state, which is the same number of offices Chambliss has. We visited the Savannah offices Friday night and yesterday, and the organizing edge goes to Martin. On Friday night, the Chambliss office was open but empty, and a couple of dialers worked on Saturday around noon.

As Gillian Bergeron, Obama’s deputy field director in Colorado and our special photographer for this trip, snapped away, the cordial Chambliss staff subtly joined the volunteers to add perception to a larger phone bank. In reality, there were three dialing volunteers while we were there. The operation was phone calls; Martin’s operation in Savannah was doorknocking, following a morning rally at the ILA Hall. 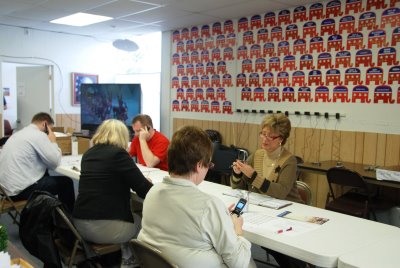 Polling in the runoff — notoriously unreliable since nobody knows what turnout model to predict — seems to peg the race at two or three points in Chambliss’ favor. Chambliss, who finished three points ahead of Martin on November 4, remains the favorite. Still, Chambliss votes trailed McCain votes by nearly 182,000 on Election Day, while Martin votes trailed Obama votes by nearly 87,000.

This can be interpreted in one of two ways. One way is that not much enthusiasm exists for Chambliss within his own base, that nearly 9% of McCain voters were there to vote for President only (compared with under 5% of Obama voters who didn’t also vote for Martin, with cross-ticket voters canceling each other out). Maybe this reflects a larger apathetic stance among Republicans toward Chambliss.

The other way to interpret the numbers is that Martin needed Obama on the ballot to get a higher percentage of his votes, and that without Obama there to inspire Democratic turnout, particularly among African-American voters, Martin will lose by a wider margin. In other words, Chambliss may have had higher dropoff from McCain, but he is less dependent on McCain’s coattails than is Martin.

Whatever turns out to be the case, at the close of early voting Wednesday, according to the Secretary of State’s office 345,564 had voted, and 22.5% of those votes were African-American, an ominous dropoff from the 34.5% of black early voters for the general election.

Still, according to Georgia Democratic Party spokesman Martin Matheny, thousands of volunteers were hard at work across the state knocking doors in the rain and making phone calls on Jim Martin’s behalf. The lines on Election Day will be much shorter than during the general election, given the much shorter ballot, and Democrats here think that most of its voters are going to turn out on Runoff Day itself.

Lots of unknowns in rainy Georgia. We’ll be bringing you a few more updates in the next two days, so stay tuned.