It looks as though Barack Obama may already be deriving some political benefit from the release of last week’s favorable jobs report.

Gallup’s daily tracking of Mr. Obama’s approval rating registered at 49 percent when the poll was released on Wednesday — the highest in a Gallup poll since June. This is noteworthy because this was the first edition of the Gallup poll that consisted entirely of interviews conducted after Friday, when the jobs figures were announced. Mr. Obama’s Gallup rating had been 46 percent based on interviews up through last Thursday, before the release of the jobs report.

In the other daily tracking poll, from Rasmussen Reports, Mr. Obama’s job approval is now at 50 percent. It had been 46 percent in the last edition of the poll that Rasmussen published before the jobs report, so this represents a four-point improvement. (Although it should be noted that Rasmussen briefly had Mr. Obama tracking above 50 percent in late January.) 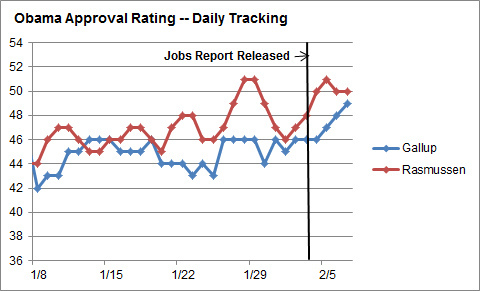 Ordinarily, it is not worth sweating every tick in a president’s approval rating, especially with the election so distant. But this one is interesting for reasons that go beyond the general relationship between the economy and presidential performance.

There is a debate in the political science literature about whether voters tend to consider their personal economic circumstances in evaluating an incumbent’s performance on the economy or instead look for signals about where the economy is headed based on news accounts.

The truth is almost certainly somewhere in between, but this evidence is a small point in favor of the latter interpretation.

About 243,000 jobs were created in January on a seasonally adjusted basis. That shows improvement, but it represents only about 0.1 percent of the American population.

And if you look at the jobs report in a highly literal way, it shows that a good number of Americans actually lost jobs in January. The work force typically declines significantly in January as workers are laid off from temporary retail and service-sector jobs that they held during the holiday season, and this year was no exception. Before these seasonal adjustments, about 2.7 million Americans lost jobs in January.

The reason the report qualified as good news is because that represents the fewest January job losses since 2006, when 2.7 million Americans were also laid off. An average of 3.1 million Americans lost jobs in the five Januaries from 2007 to 2011.

Seasonally oriented job losses are easier for people to plan around and might not have the same effect as a job loss they did not anticipate. In addition, the jobs report showed good news for job holders as well as job seekers, with wages and hours worked improving.

Nevertheless, the fact remains that Mr. Obama’s approval ratings have improved by several points since last month, even though fewer Americans are employed.

This suggests that Americans’ evaluation of the economy may be relatively forward-looking. Moreover, it suggests that published reports on economic performance can matter. Although Mr. Obama’s approval rating had already been on something of an upward trajectory in January, he appears to have gotten an additional three- or four-point gain that was specifically tied to the jobs report.

A more daring conclusion might be that at least in the short run, perceptions about economic performance may more important than the underlying reality.

Let me be careful here. These jobs numbers were genuinely good, and many of the criticisms of them are red herrings. Most of the people who are pointing out that the economy lost jobs before seasonal adjustments, for instance, were not praising Mr. Obama when the economy gained 2.1 million jobs — before seasonal adjustments — from August to November.

In addition, many private companies release data related to jobs and layoffs. They use different techniques for their seasonal adjustments, but those numbers have also been reasonably good.

Still, it seems that some of the benefit an incumbent derives from strong economic headlines is from the headlines themselves.

Speaking of which, there is one set of headlines that could be especially important to Mr. Obama. On Friday, Nov. 2, the government will release a jobs report — just four days in advance of the Nov. 6 election.

That will represent the first time since 2000 that a jobs report immediately preceded a presidential election. If the election is too close to call at that point, the report could very easily make the difference.