The Obama team’s impact assessment of its economic recovery was released this morning and is available for public viewing. It’s an interesting read all around, but there’s one thing in particular that caught my eye: 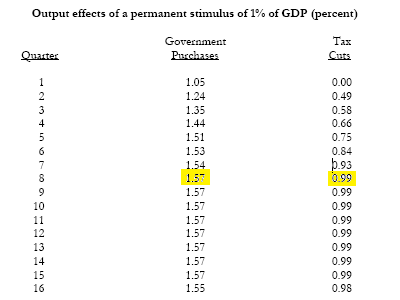 “Permanent” is an important qualification here, because in reality both the spending increases and the tax cuts are supposed to be temporary. With that caveat in mind, by the Obama administration’s own estimates, spending is likely to be considerably more productive than tax cuts, producing a $1.57 gain in GDP for every dollar spent versus a $0.99 gain in GDP for every dollar of tax cuts.

These figures shouldn’t be considered especially controversial. On the contrary, they seem fairly close to the average views among economists — although note that I use the term “average” rather than “consensus” because there is considerable room for disagreement within those averages.

Nevertheless, if Obama thinks tax cuts are liable to be less effective than spending, why is he advocating for them in the first place?

For one thing, the fact that the multiplier on the tax cuts is relatively lower does not mean they wouldn’t have some stimulative effects. If I give you $100, and you spend half of it and save the rest, that’s still $50 more circulating in the economy then there would be otherwise. This is the direct effect of tax cuts — the indirect effect is that of the $50 you spend, the businesses whom you spend it on will in turn spend, say, half of that ($25) on hiring new workers, building new machinery, purchasing new inventory, and so on. And then some fraction of that $25 is also recirculated into the economy — the new workers that I hire will spend some of their new income, the companies that I buy inventory from will in turn purchase additional inventory of their own, etc. The administration assumes that in the long-run, this process will add up to $99 of GDP growth for every $100 of tax cuts. That doesn’t sound like a great deal and it isn’t, but the $99 is at least money that gets spent now, whereas the $100 is money that will be borne in the form of deficits by future generations. (The tax cuts, of course, may have additional benefits that are normative rather than financial, such as flattening income distributions — or, you can take the libertarian position that tax cuts are an intrinsic good.)

Nevertheless, Obama posits that $100 spent on tax cuts provide for considerably less bang for the buck than $100 spent on government purchases. The nice thing about the $100 in spending is that the initial $100 is automatically added (quite literally, in fact) to GDP. Then some fraction of that $100 in turn gets reinvested into the economy — the construction worker whom you hire to build a bridge takes his family out to dinner at his favorite restaurant, which in turn hires a new line cook as a result of the improved business, and so on. The downside to government spending is that it might crowd out private spending. If the $100 I spend is money that the private sector would have spent anyway, then I’m not doing very much good, since private spending usually tends to be more efficient than public spending. But in this case, the administration figures that most of the $100 is money the private sector either can’t spend — private companies don’t build their own highways — or won’t spend during a recession because it’s become too risk-averse or because capital is too difficult to obtain.

To summarize, people who are arguing that tax cuts are liable to be more effective than government spending in the long-run are arguing in effect that:

And people who are arguing that government spending that is liable to be more effective than tax cuts are arguing just the opposite:

Oops — didn’t mean to go on the long Economics 101 tangent. But the point is, right now, Obama’s economists find the arguments for spending more persuasive than the arguments for tax cuts — as do most (although hardly all) private and academic economists.

So to repeat: If Obama thinks tax cuts are liable to be less effective than spending, why is he advocating for them in the first place?

The rationale his economists give in the paper is that tax cuts are liable to go into effect more quickly than spending, since there are a limited number of “shovel-ready” projects available whereas tax cuts can begin having benefits almost immediately. This is a fine enough argument, but the efficiency gap that Obama posits between tax cuts and spending is large enough that it would seem to warrant at best a small fraction of the stimulus to be spent on tax reductions, rather than the 40 percent or so that Obama has proposed to spend now.

The truth is, however, that the Obama administration is probably thinking more in terms of an ‘either’ than an ‘or’: not a stimulus bill but two separate stimuli, one of which is $300b in tax cuts and the other of which is $500b in government purchases. And they seem to be roughly indifferent toward the tax cuts — it may not be a coincidence that the long-run multiplier they provide on the tax cuts is almost exactly 1.00. They think they’ll help a little, but not a lot, maybe just enough to justify running up the deificit, or maybe not quite. Provided they are indifferent toward the tax cuts, however, they can be freely brandished as a weapon to help facilitate the passage of the $500 billion (or more?) in spending, which is the part they’re ultimately interested in. Accordingly, I think it’s important for advocates for a larger stimulus to be focused on maximizing the $500b number as opposed to minimizing the $300b number; the scent of $300b is something that seems to have thrown both sides off the trail.

NOTE: Yes, this is an oversimplification. Not all types of tax cuts have the same multipliers associated with them, nor do all types of spending. So that’s certainly something to fight about.