The Supreme Court “saved” Obamacare on Thursday, upholding tax subsidies for federal health care exchanges. And, indeed, it’s difficult to see how the law could be overturned. But the political debate is likely to live on — half of Americans say there’s room for further discussion of the Affordable Care Act (ACA), and the court’s ruling is unlikely to change that.

The Supreme Court has “saved” the ACA before. In 2012, the court ruled that the law’s individual mandate to buy insurance was constitutional (as a tax). At the time, Americans were split on the ruling, with 46 percent in favor and 46 percent opposed, according to a Fox News poll. But a bump in the percentage of Americans in favor of the law did follow the court’s decision.

Still, that bump was temporary. It wasn’t until the error-plagued HealthCare.gov rollout in fall 2013 that opposition to Obamacare hit its peak, at 55 percent, in the Pollster.com aggregate. Since that point, the law has settled back into its longtime pattern: Opposition is a little greater than support, though neither side has a clear majority. As Mollyann Brodie, Kaiser Family Foundation’s executive director of public opinion and survey research, said on a conference call Thursday, the public has not been paying much attention to this case. That is, there is little reason to believe Thursday’s decision will be a game changer. 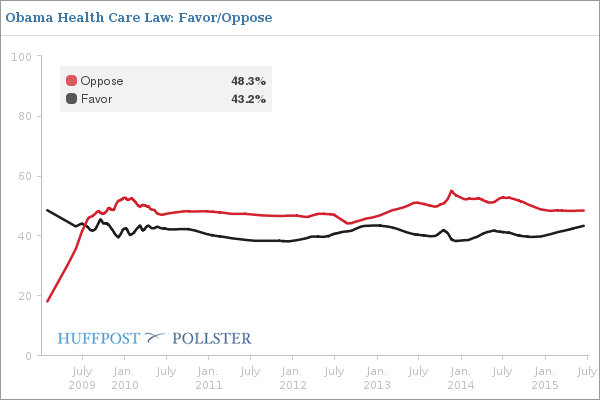 A plurality of Americans believe that the law should still be debated. In a Kaiser Family Foundation (KFF) poll taken earlier this month, 49 percent of Americans held this view, and 45 percent thought we should move on to debate other topics. In a May CNN survey, 53 percent said it was too soon to call Obamacare a success or failure. Most Americans are in wait-and-see mode.

Now, of course, it’s possible that this 2015 Supreme Court health care ruling will be different. It’s the second landmark decision upholding the law, and so could be more likely than the 2012 ruling to convince Americans that the debate should end.

But even if that does happen, we’re still dealing with a Republican base that’s firmly against it. Back in 2012, Mitt Romney kept hammering away at Obamacare. The most recent KFF survey had opposition at 69 percent among Republicans, and other polls have had it higher. After Thursday’s Supreme Court decision, many Republican candidates for president came out forcefully against the ruling. That should keep the debate polarized and makes it unlikely that favorable views of the law will climb too quickly. Obamacare will be an issue in the 2016 campaign.