This is the third and final post of three in which I consider the potential implications of the decline in 2010 of the so-called “Obama surge voters,” more specifically the turnout jump in 2008 of non-white voters and to what degree the drop-off in turnout among these voters potentially exacerbates the Democrats’ expected problems in this November’s midterm.

There could be as many as 50 House races to analyze, so to simplify matters a bit I took the 23 Democratic-held or recently-held districts presently rated as “tossups” (as of Sunday night) by at least two of the four major electoral prognosticators: Cook, Rothenberg, Sabato and CQ. Among these 23, about a third will not have Democratic incumbents running: John Murtha’s death and Eric Massa’s resignation created two open seats, and there are six other Democrats who will not be seeking re-election. (N.B.: There is one Republican district–Illinois Mark Kirk’s, which will also be open this November–that is rated “tossup” by at least two of these rating services.) 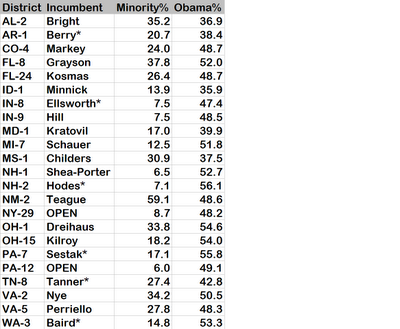 I then collected two pieces of data for each, both courtesy of this National Journal dataset: The minority share of the district, based on a three-year average between 2006 and 2008; and Barack Obama’s district share. Of the 23 districts, 14 of the Democrats are so-called “McCain Democrats”–those who won in districts carried by the 2008 Republican nominee.

The presumption here is that a district with a large minority population share is potentially more perilous for the Democrats because a drop-off in minority turnout in 2010 will remove the electoral cushion necessary to survive a so-called “wave” cycle. Of course, as I said before, if one wants to presume that this midterm will be a precedent-breaking one because these newly-mobilized “Obama surge” voters are still engaged and will rally to the president’s defense by showing up for downballot Democrats this autumn, that assumption can be turned inside out. But again, I think the more likely expectation is the former.

In any case, these 23 districts offer quite a bit of variance on both dimensions. Obama’s performance ranges from around 35 percent to 55 percent, and there is even more variation in estimated minority population share: ranging from the late Murtha’s low of 6.0 percent in PA-12 to Harry Teague’s Hispanic-dominated, 59.1 percent minority NM-2 district.

I asked Isaac Wood, who covers House races for Larry Sabato’s “Crystal Ball” at the University of Virginia which districts with high minority populations where the Democratic incumbents are in a lot of trouble stick out most in his mind. He named two, both of which turned out to be on the list of 23: Steve Dreihaus in OH-1 and Tom Perriello in VA-5. “OH-01 is the clearest example, perhaps in the entire country,” Wood wrote me by email. “Steve Driehaus won a 5% victory in a battleground district with 28% African-American residents. In 2004, Bush won the district by 2% but with a surge in minority turnout Obama easily carried the district by 11%. That is a 13% swing in just four years, due mostly to the third of voters who are non-white in the district.” As for Perriello, Wood noted that he “won a 727-vote victory in the closest House race in the country in this district where 23% of the residents are African-American. While McCain garnered 6,000 more votes in 2008 than Bush won in 2004, Obama outperformed Kerry by a whopping 36,000 votes. That is a lot of votes to pick up in just four years and the 28% of the district that is non-white likely played a big role.”

I then thought it might be worthwhile to scatterplot these 23 to see if any clusters emerge, and there is one worth noting. 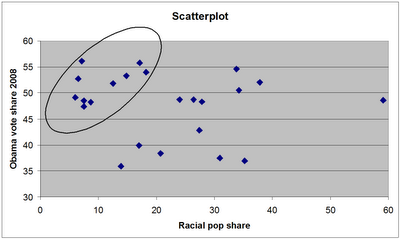 In that oval in the top-left corner are 10 districts with fairly solid Obama performance despite low minority population shares. That means Obama and the incumbent Democrat both fared sufficiently well enough among white voters in these swing districts to win. White voters may abandon the Democrats this fall, of course. But the Democratic candidates in these 10 districts are less likely to be victims of a possible midterm drop-off in 2008 Obama surge voters. Sorted in ascending share of minority population, they are: PA-12; NH-1; NH-2; IN-8; IN-9; NY-29; MI-7; WA-3; PA-7; OH-15.

What’s interesting is that all but retiring Brian Baird’s Washington district are located in a string of states ranging from Indiana to New Hampshire. There are a lot of southern and western districts that will be tough for Democrats to hold if African American and Hispanic voters disappear this November. That said, the fate of Nancy Pelosi’s majority is therefore likely to be decided by key races in a band of Rust Belt states.