As the 2010 midterms grow nearer, I thought it might be worthwhile to take a look at the voter turnout increases between 2006 and 2008. This can be problematic, of course, because one is a midterm and the other a presidential cycle. There is a natural zigzag effect in voter turnout out between presidential and midterm cycles—a phenomenon scholars and voting analysts tend to refer to as “drop-off” effect because there is a significant drop-off in turnout when the presidency is not on the ballot. 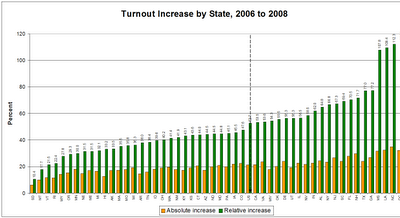 In any case, in this first of what will probably be two posts—based on data collected and reported here by my colleague Michael McDonald of George Mason University, one of the nation’s leading experts on voting turnout behavior—let’s look at some general patterns that merit attention:

1. First, and not surprisingly, although every state and the District of Columbia experienced higher turnout in 2008 than 2006, there is quite a bit of variation in the levels of increase. In absolute terms—which is how I sorted the entries in the figure above—the increases range from South Dakota’s low of 6.0 percent to North Carolina’s 34.8 percent; in relative terms, they range from SD’s 10.4 percent to the DC’s 114.1 percent. To put those extremes in context, the national averages—see the vertical line in this crowded figure—were 21.3 percent in absolute terms and 52.7 percent in relative gains.

2. Notice that DC, along with North Carolina (112.3 percent), Louisiana (109.4 percent) and Mississippi (107.8 percent), are the only jurisdictions in which the turnout rate more than doubled between 2006 to 2008. Pretty amazing. Although there are some other big gainers, none come even close to these four. Though I will talk more about this in a follow-up post, also notice that all four (and many of those toward the right side of the bar chart) are states with either significant African American and/or Latino populations.

3. Of course, a big relative increase can be a function of an abysmally low turnout baseline from the 2006 midterm in the first place; and conversely, some of the states with small absolute and/or relative increases are not so much civic laggards as they are simply those states where voters already turned out at high rates in 2006, and thus there was far less room for growth. The latter include many states from New England, the Midwest and Mountain West; Minnesota was below national averages in absolute increase (18.0 percent, ranked twentieth smallest gain nationally) and relative increase (30.0 percent, seventh smallest nationally), but that’s because MN had a whopping 60.1 percent turnout in the 2006 midterm and a 78.1 percent turnout in the 2008 presidential.

4. Two outliers among the bunch—those with both small absolute and relative gains between 2006 and 2008 that cannot be attributed to already high turnout rates—would be Hawai’i and Arkansas. Turnout in HI increased only 33.2 percent relatively between 2006 and 2008, from 37.9 percent to 50.5 percent in absolute terms; for AR, the respective figure is 38.0 percent, going from 38.7 percent to 53.4 percent. That these happen to be home states of sorts for the two major contenders for the Democratic nomination in 2008 is a bit of a puzzlement. I suppose AR’s low presidential turnout rate makes sense in terms of the lack of enthusiasm among working-class Appalachian whites in 2008. And maybe Hawaiians didn’t show up at higher rates for their native son because they knew Barack Obama’s victory there was never in doubt. (He carried it by a larger margin than any of the other 49 states; only in DC was his margin greater.)

These general trends aside, the pattern of political-electoral import that jumped out at me the most when I first sorted and charted the result is this: There are a surprising small number of presidential swing states at the top end (or right, in the figure) of the list. Of those 20 states with above-national-average absolute gains–that is, to the right of the US in the figure–at most you could classify nine of them as swing states, in order: Nevada, Iowa, Colorado, Indiana, Virginia, Georgia, Florida, New Hampshire, and North Carolina. And that’s with Georgia, which the Obama campaign harbored notions of flipping, included in the list, as well as Indiana and North Carolina which, of course, became swing states thanks in part to voter surges there.

Looking at the other 11, notice that many of them also have significant non-white statewide populations, which testifies to the fact that Obama’s surge electorate was, more than any other feature (including age), non-white. The total number of white voters between the 2004 and 2008 presidential elections increased but one percent, whereas the non-white number grew 19 percent and 23 percent among the subset of non-whites who are African American.

In a future post(s) I will consider what the potential impacts of the expected 2010 disappearance (or potential last-minute re-emergence?) of the so called “Obama surge voters” might be in specific states featuring key congressional and/or gubernatorial contests this November.