At least one polling agency, Gallup, now has support for the stimulus increasing again after Barack Obama’s salesmanship efforts: 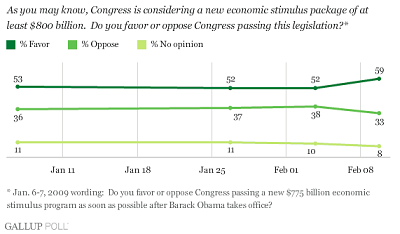 Since polling on the stimulus has been all over the board, we’ll probably want to wait for confirmation from at least one other polling agency before we regard the trend as statistically significant. But it would be surprising if this were not true. Obama is a highly skilled and highly popular politician. He can package ideas in a way that a typical Democrat can’t.

Obama can also command the media stage in a way that no other Democrat can — and in ways that no Republican can. I don’t particularly buy that the press, as a whole, has a pro-Republican bias (although certainly some individual outlets do). Rather, they have a pro-conflict bias — conflict sells copy — and for the most part conflict mean Republicans going after the Obama agenda. But if the White House calls a press conference, or organizes a field trip to Indiana, that story will lead the day in virtually all outlets.

Most of the increase in support has come from among Democrats rather than Republicans or independents. As I argued the other day, I don’t think that Obama needs to be worried about maintaining an approval rating in the high 60s or low 70s. Instead, he can stay in the high 50s or low 60s by maintaining the support of: (i) Most — ideally, almost all — Democrats; (ii) A clear majority of Democrats; (iii) a handful of sympathetic Republicans. That’s roughly how Gallup has support breaking down on the stimulus, with 82 percent of Dems, 56 percent of independents, and 28 percent of GOPers now approving.