One of the more disappointing elements of the Obama campaign has been their advertising, which has tended to focus on fairly conventional, 30-second, issue-based spots. Their ads have been neither creative nor attention-grabbing, in contrast to both their reputation for being a media-savvy campaign, and some of the relatively creative spots put together by the McCain team.

I suspect that the next 2-3 weeks are probably the most important point in the campaign for advertising. Once the debates begin, it will probably be too late to fundamentally redefine either the candidate’s message or the opponent. And advertising is difficult in the two-week home stretch between the debates and the election, with campaigns usually constrained to conventional biographical spots or hail mary negative attacks. So now is the time for the Obama campaign to go all out and spend some of those hundreds of millions of dollars in donations they have collected.

In that spirit, here are two Obama ads that I’d like to see.

Firstly, I think they need some sort of hit on Sarah Palin. But it can’t be too personal. The whole point is to portray her as a conventional and perhaps somewhat corrupt and provincial politician, and break out of the sort of People Magazine / US Weekly popularity contest that has broken out. There is so much attention being paid to Palin’s celebrity that she has gotten away with asserting her claim to being a reformer when there are some strong rebuttals to such things.

The easiest point of entry is probably this one: during the last four years of her tenure as mayor of Wasilla, Alaska, Palin procured more than $26 million in pork barrel projects. This translates to about $4,000 per resident of Wasilla, or about 30x the per capita rate received by a city like Boise, Idaho. Is this such a terrible thing? You decide, but it undermines her reformer image and I think makes a good 30-second talking point.

I would make this a “fun” and light-hearted ad, maybe even cartoonish and honky-tonk, with some banjo music in the background as the narrator talks about the pork that Palin has procured, with a reference thrown in to her initial support for the Bridge to Nowhere. This is more along the lines of an ad you’d usually see in a Senate campaign rather than a Presidential one, but I think Obama needs to break the mold a bit. 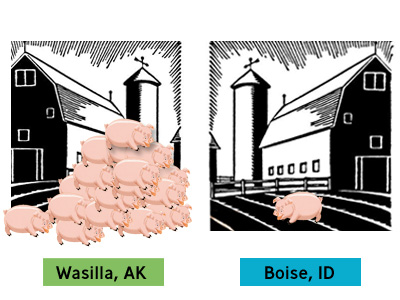 The other campaign I’d do is not one ad but a series of them. During the final night of Democratic Convention in Denver, the Obama campaign had seven or eight ‘ordinary’ people speak to the assembled crowd at Invesco Field. They were working class, middle-aged white and Hispanic voters, who conveniently all happened to be from swing states. But they were actually pretty persuasive, and produced some of the more moving moments of the convention:

So I would put together five or six of these spots, featuring these people or people like them speaking directly to camera, with interspersed images of their hometowns and their families, reserving 5 seconds at the end for a few phrases on blackscreen:

You get the idea. It’s a little unconventional but would be buzzworthy and would seek to counter some of Palin’s homespun appeal.

In any event, I’m not all that wed to either of these particular ideas, but if the Obama campaign does not begin to think outside the box a little with its advertising, I think it may find it has trouble getting the return on investment it expects.