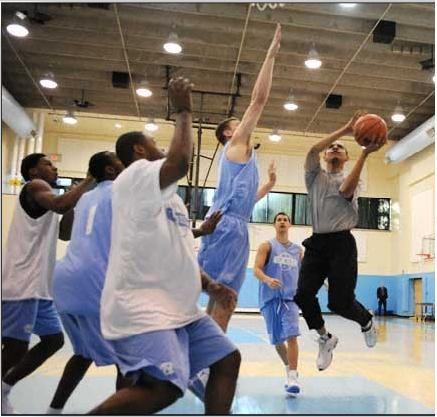 Is President Obama playing favorites with his NCAA bracket? Neither Columbia University nor the University of Chicago have an entry in the Big Dance (the Maroons, alas, aren’t even in D-1). Nor does the University of Hawaii or Oregon State University, where Michelle Obama’s brother, Craig Robinson, is the coach. The University of Illinois did make the bracket as a #5 seed; Obama has them winning their first round game against Western Kentucky, but then succumbing to the #4-seeded Gonzaga.

There is more than one way, however, for the President to play favorites. Was Obama more inclined to select teams from swing states that were closer in last November’s election? A bit of reverse engineering of his bracket suggests that the answer is a qualified yes.

There are 63 games in the men’s tournament. In one case, two teams from the same state (Louisville and Morehead State, both from Kentucky) are set to square off. In the other 62 games, Obama has the team from the state which was closer in the November election advancing 35 times (56% of the total).

This in and of itself is not that definitive. Such an outcome could easily have emerged through chance alone. Nor have we accounted for the respective seeds of the teams (the President was highly disinclined to pick underdogs). So a somewhat more rigorous analysis is required.

The first dependent variable, seeddiff, is the seeding difference between the two clubs. For example, in a game featuring a 7-seed and a 10-seed, seeddiff is 3.

The other dependent variable, swingdiff, is an indication of the relative closeness of the two states in the November election. The swingdiff variable is calculated as follows…

…where margin_favorite is the number of points separating Barack Obama and John McCain in the state represented by the favored team, and margin_underdog is the same number for the state represented by the underdog. These values are taken to their square roots because there are diminshing returns once a state becomes non-competitive beyond a certain point; a state which one candidate wins by 20 points isn’t really much swingier than one that he won by 30.

For example, take the 1st round game between #6-seeded UCLA and #11-seeded Virginia Commonwealth University. The margin in Virginia on November 4 was 6.3 points, whereas the margin in California was 24.0 points. swingdiff would thus be calculated as follows:

In this case, the value of swingdiff is negative; this indicates that the underdog came from the swingier state. And indeed, Obama picked VCU over UCLA.

When we plug swingdiff and seeddiff into the regression model, we get the following result:

The value for seeddiff is significant and positive, indicating (unsurprisingly) that Obama was more inclined to pick the team with the superior seed, and that this inclination increased with the seeding difference. However, the value for swingdiff is also positive, and significant at the 90 percent probability threshold (although not quite at the 95 percent threshold). It appears probable, therefore, that Obama did in fact have some tendency to prefer teams from swing states in filling out his bracket.

However, suppose that seedings are reversed: the #2 seed comes from the swing state, whereas the #1 seed does not. In this case, the model predicts that Obama would select the favored #1 seed just 48 pecent of the time, and the swingier #2 seed the rest.

This is actually fairly easy to see if we look at the cases where Obama did, in fact, pick an upset.

1st Round:
Maryland (10) over California (7). Both states are deeply blue, so nothing to work with here.
Tennessee (9) over Oklahoma (8). Likewise, nothing much revealed by this choice between two red state teams, although Tennessee is moderately more swingy than Oklahoma.
Virginia Commonwealth (11) over UCLA (6). Virginia is a swing state, California isn’t.
Butler (9) over Louisiana State (8). Butler, based in Indianapolis, is in a swing state whereas LSU isn’t.
Temple (11) over Arizona State (6). Although Arizona could plausibly be a swing state with John McCain off the ballot, it’s unlikely to have the same import as Pennsylvania, where Temple is located.

3rd Round:
Syracuse (3) over Oklahoma (2). Deep red state against deep blue state. No net effect, although there are undoubtedly a large number of Syracuse fans in NY-20, which is holding a special election to replace Kirsten Gillibrand later this month.

4th Round:
Memphis (2) over Connecticut (1). Neither Tennessee nor Connecticut is particularly swingy. It’s also not clear that this is much of an upset (Memphis is probably the better team).

5th Round:
No upsets.

6th Round (Championship):
North Carolina (1) over Louisville (1). This qualifies as a very mild upset according to AP rankings. North Carolina (where Obama is also friendly with Dean Smith) is a swing state, Kentucky is not.

Although Obama did not pick very many upsets, just about every time he did it tended to favor the team from the swingier state. With that said, there are a couple of upsets that Obama could have reasonably picked but didn’t, such as #3-seeded Missouri over #2-seeded Memphis or #2-seeded Michigan State over top seed Louisville.

But yes: the President does appear to have been mixing his hoops with his politics. Will the nation ever recover?