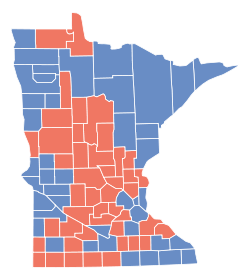 The bad news for Obama is that his overall approval in the state has dipped; in fact, his approval/disapproval margin in Minnesota is just half (54 percent to 39 percent, net 15) what it was in April (60 percent to 30 percent). Independents approve of the president by just an 8-point margin, 49 percent to 41 percent. Like many Americans, Minnesotans are growing impatient.

PPP also polled respondents on Democratic Senator Amy Klobuchar. She has a solid approval/disapproval margin of 26 points (56 percent approving, 30 disapproving), on the strength of 68 percent to 18 percent edge among self-described moderates.

UPDATE: Our own Ed Kilgore posted some thoughts of his own about this poll over at his home site, The Democratic Strategist. Worth a look.