This past weekend I attended the Midwest Political Science Association’s annual meetings at the Palmer House in Chicago. Local Congressman Luis Gutierrez gave the Pi Sigma Alpha lecture on Friday afternoon, and he spoke at length about immigration reform, the developing situation in Arizona, and his worry that President Obama and the Administration will not rise to the challenge.

He did sugarcoat what he had to say. Although I didn’t have my digital tape recorder on hand to record his comments in regard to immigration and the Administration, I can assure you Gutierrez’ remarks were not as diplomatic as this recent press release on the subject, but rather were much closer to his recent Huffington Post comments, in which he expressed his growing impatience with Obama. He also flatly called Obama’s promise to pass a comprehensive immigration reform bill in his first year a “broken promise.” More to the (electoral) point, Gutierrez has begun to openly suggest that he may consider encouraging Latinos to stay home this November which, if they did, would exacerbate the Democrats’ expected problems and electoral losses. 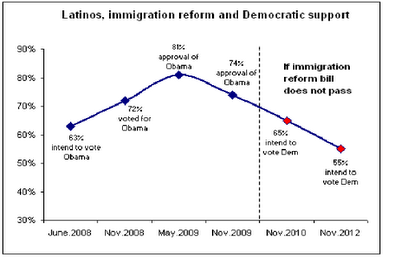 Gutierrez is not your typical Obama critic, mind you. When most other Latino elected officials were lining up behind Hillary Clinton in late 2007, he sided with his fellow Chicagoan. That not only made him an outlier among national Latinos; it also made him an outlier in his own part of the city, where he says all of the Latino wards were carried by Clinton, not Obama–just as she did overall in key states and nationally during the primary.

In short, Gutierrez says he stuck out his neck for Obama. And now, in what he calls the “civil rights fight” of this generation, he wants the President to stick out his neck for Latinos, particularly those who Gutierrez predicts will likely be profiled for rounding up in Arizona.

However one feels about legal or illegal immigration (a policy dispute I’ll set aside to focus exclusively on potential electoral impacts), the actions of President Obama and his Administration will undoubtedly be a key point of focus as Latinos–who voted for Obama over John McCain by more than a 2:1 margin in 2008–decide whether to turn out this November and/or how to vote if they do show up. Obviously, the Latino vote (or non-vote) could prove pivotal in several of Nate’s (see left) top-rated Senate races (Colorado, Nevada and Obama’s own Illinois), not to mention at least a half-dozen of the gubernatorial races presently ranked as toss-ups by Charlie Cook (Arizona, California, Colorado, Florida, Nevada & Texas).

According to Stanford University political scientist Gary Segura* of Latino Decisions, enthusiasm to vote this fall among Latinos is dropping and, he projects, will drop further if there is no comprehensive immigration bill. The chart above is from this post at the Latino Decisions website. Segura writes:

New polling data from Latino Decisions is our attempt to estimate this effect among Latinos. We find Latino enthusiasm for voting in the November 2010 [election] is at an all time low. In 2006 when Republicans held the White House, the Senate, and the House, and immigration marches mobilized millions of Latinos around the country interest in the midterm was at record levels. Now, four years later, many Latino voters do not see an urgency in turning out. In April 2006, a Latino Policy Coalition survey (which LD principals helped write) found that 77% of Latino registered voters stated they were certain to vote, a measure of enthusiasm that grew to 89% determined to vote by September 2006. By that November, about 60% actually voted.

Compare those numbers to our recent data. As of March 2010, Latino Decisions survey data finds that just 49% of Latino registered voters say they are very enthusiastic about voting. Since 60% of Latinos turned out in 2006 when their self-reported enthusiasm was 77%, what does that spell for 2010 if the starting point for enthusiasm is only 49%?

Of course, flipping the script for a moment, a full-court press by the Obama Administration against Arizona will also lead to some degree of electoral blowback. In fact, conservatives and Fox News are already making hay of a recent Obama video message in which he appeals specifically to Latinos (along with other minorities and women and young voters) to help the Democrats this fall. The only question here is how many of these folks would otherwise be supporting Democratic candidates in the first place.

*Dr. Segura is a colleague and friend, and along with Matt Barreto–whom I mentioned last week because he is co-investigator on the Chris Parker survey research–are principals at Latino Decisions. Not sure why all these people with connections to the University of Washington–where Segura taught before being hired away by Stanford–are suddenly making the news the past month, but they are.