During the debate over the so-called fiscal cliff in December, public opinion surveys showed more Americans trusted President Obama than trusted Republicans in Congress when it came to handling the nation’s economy. The New Year’s Day deal to avoid going over the cliff, which included higher marginal tax rates on high earners — something Mr. Obama had campaigned on and lobbied for — was largely seen as a victory for the president.

But with more budget battles approaching, over raising the nation’s borrowing limit and perhaps reaching a grand bargain, Mr. Obama’s advantage over Congressional Republicans has all but vanished. Public approval of his handling of the economy has slipped, according to polls, and surveys now show that a roughly equal number of Americans favor Mr. Obama as favor Congressional Republicans on economic matters.

In December 2012 and January 2013, polls found that roughly half of Americans had more faith in Mr. Obama’s economic stewardship, while just over a third of respondents said they had more faith in the economic stewardship of Congressional Republicans. Since December, however, Mr. Obama’s standing has declined by roughly 10 percentage points, while Republicans in Congress have gained 4 or 5 percentage points.

Other pollsters, asking slightly different questions, have also found that the White House and Congressional Republicans are now on more equal fiscal footing. A Fox News poll conducted this week found when “it comes to handling the budget deficit,” 44 percent of registered voters agreed more with Mr. Obama, while 41 percent agreed more with Republicans.

A CNN poll conducted March 15 to 17 found that respondents were split in whom they preferred on handling of “the federal budget and the way the government raises and spends money,” 47 percent for Mr. Obama and 46 percent for Republicans.

The CNN poll had another worrying number for Mr. Obama. The last time a government shutdown was in the news, in September 2011, CNN found that 47 percent of respondents thought Republicans in Congress would be more responsible for a shutdown if it occurred. Just one-third of respondents said Mr. Obama would be to blame.

But CNN asked the question again in its mid-March survey and found that Mr. Obama’s advantage was gone; 40 percent of respondents said they would blame Congressional Republicans for a government shutdown and 38 percent said they would blame Mr. Obama. (Threat of a near-term government shutdown was averted after the House of Representatives passed a stopgap bill financing the government through the end of the fiscal year.)

Mr. Obama’s approval ratings on his handling of the economy over all have also dropped since their high-water mark in December and early January. 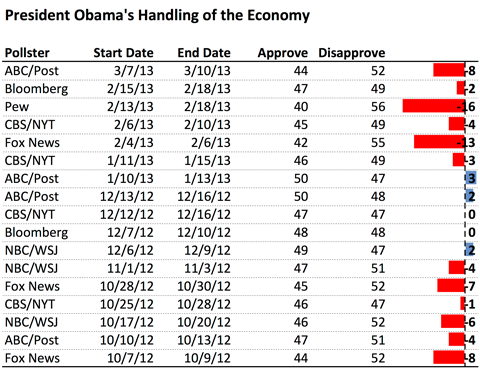 It is not clear what is causing the decline, but it doesn’t seem to be the actual economy. There are increasing signs that the recovery is accelerating. Recent reports on jobs and housing have been unexpectedly strong. And all the while, the stock market has been bullish.

In addition, Gallup’s consumer confidence index has improved, albeit in fits and starts. And other polls on the economy show that public sentiment is not great, but it hasn’t degraded in recent months.

One theory holds that the fight over the automatic budget cuts contained in sequestration hurt Mr. Obama. Some political observers contend that the Obama administration overplayed its hand in the run-up to March 1, when the cuts began to go into effect.

Of course, the dip in Mr. Obama’s approval ratings on the economy might simply be a reflection of an overall dip in Mr. Obama’s popularity after a postelection bounce. The president’s job approval ratings improved after he won re-election, but that postelection honeymoon appears to be ending (a bounce is, by definition, ephemeral). According to the RealClearPolitics average, Mr. Obama’s net job approval is just 1 percentage point (48 percent approve and 47 percent disapprove). That’s down from a high in mid-December of plus 12 percentage points (54 percent approved and 42 percent disapproved).

Just as his overall job approval appears to be falling back to where it hovered for most of 2012, public approval of Mr. Obama’s economic stewardship may simply be regressing toward the mean. Polls testing the public’s trust in Mr. Obama and Congressional Republicans on economic issues are largely back to where they were for much of 2011 and 2012.

As a result —  unless the polls shift again — neither Mr. Obama nor Congressional Republicans will be able to count on having a significant advantage in public support in upcoming budget fights.