CNN asked a stupid question and got a stupid result:

From everything you have heard or read so far, do you favor or oppose Barack Obama’s plan to reform health care?

OK, so in fact there’s nothing stupid about the question at all. The public’s response, likewise, is perfectly reasonable given the information they were provided.

But a better question might be: what exactly is Barack Obama’s health care plan? Does he have one?

And how is the plan going to be paid for — something the campaign version of Obama’s plan was largely silent on? Is there going to be a tax on health care benefits — an economically sound but undoubtedly unpopular idea that Obama explicitly campaigned against? Booze and cigarette taxes? A rollback of the Bush tax cuts? A value-added tax?

The more pressing issue, though, may be that the lack of detail and public-facing leadership from the Administration on health care. You’d think that if you took two fairly popular things — health care reform and Obama — and combined them together, you’d wind up with a more popular thing. Instead, we have a situation where the Obama “plan” is less popular than the idea of health care reform in general and less popular than Obama in general. Obama’s approval ratings on health care, indeed, lag about 10 points behind his overall numbers, according to an average of three recent polls:

The conservative spin on this is Obama’s personality is preferred to his liberal politics. That might be true, but it’s not clear that conservatives are the only problem Obama has on health care. Quinnipiac actually tracks presidential approval by political philosophy (liberal, moderate, conservative). Although Obama is underperforming on health care among all groups, the differences are larger among moderates and liberals than they are among conservatives: 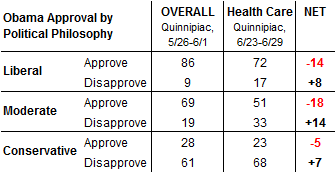 That’s not to suggest that Obama should throw caution to the wind and push for single payer. But he needs to begin pushing for something, and something fairly specific.