President Obama has been described as many things – a Rorschach inkblot; a movement; a new America; a fraud; a demagogue. For whatever it is that he ultimately represents to the world — the United States living up to its ideals, perhaps — he is incredibly popular.

Among major world leaders, he polls by far the best among the global community* :

Among countries where the United States has a very poor image, for example among six Arab states in the Middle East, Obama widely outperforms. 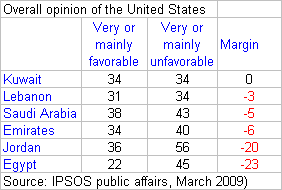 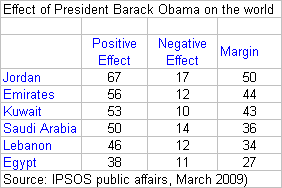 What still is not clear, however, is how much of Obama’s popularity is due to his own efforts, or those of his predecessor. For many in the global (and U.S.) community, a considerable portion of his charm is simply not being George W. Bush. Whether softening the US rhetoric on Iran, Cuba and Russia, making highly public statements about reducing civilians casualities in Afghanistan, or committing to less interventionism in Latin America, popular opinion is that the foreign policy of the Obama administration is a huge turnaround on the Bush years.

The analysis of some observers, however, has suggested the Obama foreign policy approach is largely identical to Bush’s, just packaged in a much more friendly fashion. By quantitative measures of foreign policy, limited as they are in their explanatory power, does tend to support this stance. By examining the two major financial investments that a government makes in its foreign policy application — military spending and development aid — we can roughly look at the application of hard and soft power in the implementation of foreign policy priorities.

For the last twenty years, the US approach to foreign policy application has changed little, by this measure, although the intensity of its application has. From the late 1980s through the Clinton administration, the drawdown from the Cold War meant a reduced engagement with many parts of the world. The more interventionist Bush policies pushed both spending areas back up through the 2000s. But throughout, each type of spending generally maintained its proportion of foreign policy outlays. The following chart illustrates this, showing development aid (ODA) and military spending (MIL) as percentage above or below their twenty-year average.

In fact, military spending between 2004 and 2007 is actually understated here, because the Iraq and Afghanistan wars were funded off-budget through “emergency” appropriations bill. The low 1989 figures for ODA are due to the US’s record 79% UN budget arrears in George H.W. Bush’s first year in office.

While the specific policy foreign priorities of the three Presidents included in this period (Soviet/post-Soviet transition & Gulf War; NATO driven actions & reduced spending in order to focus domestically; Aggressive intervention in select countries & aid to Africa) were quite different, their underlying spending strategies of high military spending and relatively low development aid were very much in unison. 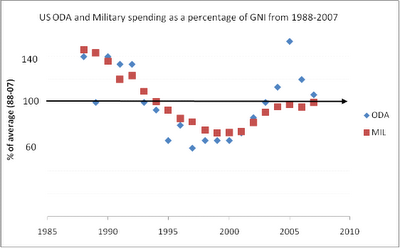 As it turns out, the Obama plan is actually strongly in keeping with the US strategy of the last twenty years, with regards to military spending and development aid. In addition, in keeping with the George W. Bush administration’s escalation of spending in both areas following 9/11, Obama’s budget calls for increases in both military spending and development aid. This includes a more robust focus on multilateral diplomatic institutions (e.g. Susan Rice’s now cabinet-level post), but an even greater focus on the role of military allies in the U.S. strategy regarding Iran, North Korea, Iraq, Pakistan, Afghanistan and continued military spending increases, even adjusting for the Bush off-budget moves.

While he is shifting the application of the strategy between locations and priorities, the overall Obama strategy reflects the more fundamental American idea of how to successfully deploy foreign policy ideas, which remains heavy on the military intervention, and light on the permission-asking. Indeed, the global public still see the U.S. foreign policy as a largely force-driven operation*. 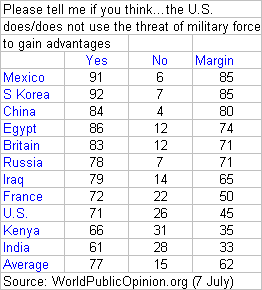 The Obama team seems to be focused on ensuring that these aggressive military activities are now complemented with a robust and well-considered plan of discussion and dialogue, rather than unilateral action. And the Obama effect of acting also as bridge-builder-in-chief has mean that suddenly, the activities are being marketed to the world in a way that builds confidence more than resentment. Both based on identity, charisma, and downright shrewdness, Obama has been able to re-market the U.S. in an exciting, and likely more accurate, fashion.
—–

note: Thanks to commenters for pointing out several typos.
—
Renard Sexton is FiveThirtyEight’s international columnist and is based in Geneva, Switzerland. He can be contacted at sexton538@gmail.com