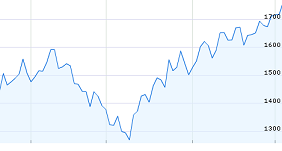 The NASDAQ was at 1,484.43 at noon on January 20th, at which point Barack Obama took over the Presidency. The NASDAQ has increased its value by approximately 19 percent since then, a span of 104.5 days. Per the compound interest formula, this translates to an 82.7 percent annualized growth rate.

Looking at the stock market, of course, is a relatively asinine way to evaluate the performance of the economy, much less the performance of the Presidency. But I think conservatives may have done themselves a real disservice by making the market the benchmark for Obama’s success back when the major indices were slumping in late February and early March. The market was somewhat undervalued at that point by long-term measures like 10-year average P/E ratios, and the odds were pretty strong that it would produce above-average returns over Obama’s term. It may not be a coincidence that Obama’s approval ratings, which were declining over the first 50 days or so of his Presidency, have held steady since mid-March and perhaps even ticket upward — his Gallup approval rating hit 68 percent yesterday (it fell a tick to 67 percent today), its highest figure since interviewing on January 22-24th.

There is risk here for Obama — it is now much harder to make the case that the market is undervalued and volatility remains high by historical standards; a significant retrenchment is possible, as is a continuation of the bull market conditions of the past 60 days or so. But given the choice between having a leading indicator like the stock market be regarded as his economic benchmark or a lagging indicator like employment (where the numbers are still getting worse), Obama would take the stock market every time.