The National Review’s Jim Gergahty tweets: “Can Obama really save Coakley if PPP puts his approval/disapproval split at 44/43?”

If the electorate which turns out tomorrow is this indifferent about Obama, I have little doubt that Coakley is headed for defeat. But I think we have to place into context just how lopsided turnout would be if indeed we see an electorate that is split 44/43 on Obama. Here are some of the relevant numbers, both in Massachusetts and nationally. 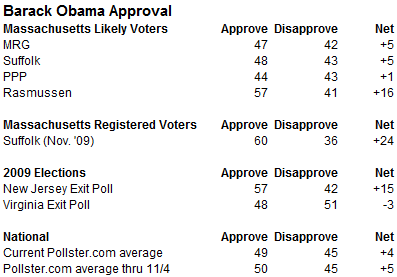 Three pollsters — Suffolk, MRG and PPP — all place Obama’s approval between a net +1 and a net +5, and each have the raw approve number under 50 percent. Those numbers are basically identical to how Obama’s polling nationally at the moment — and this is Massachusetts.

Of course, some of those national polls are of registered voters or adults rather than likely ones, which is the whole rub. But in New Jersey this November, the electorate which turned out was +15 on Obama, basically identical to the +16 margin by which he carried the state in 2008. The news was much worse for Democrats in Virginia; Obama was a -3 there, after having carried the state by +6 — producing a 9-point “turnout gap”.

Obama carried Massachusetts by 26 points in November 2008. (His approval among registered voters there also appeared to be about +24 as of November 2009). So, if Democrats suffered from the same turnout gap in Massachusetts that they had in Virginia (which was billed as catastrophic at the time), Obama would be at a +17 or so. Instead, you have several pollsters showing him at a +1 or a +5 — which would imply a turnout gap of 20 or 25 points, more than twice as bad as the one Democrats suffered from in VA.

Sure, a lot has happened since November. But Obama’s approval ratings are basically unchanged since then, both among all voters nationally and the liberal ones who populate Massachusetts.

Of course, there are other differences between Massachusetts and NJ/VA. In particular, special elections generally have lower turnout than odd-year ones, and Coakley is arguably a worse candidate than either Jon Corzine or Creigh Deeds, which is quite a feat to pull off.

Nevertheless, if Coakley loses, I tend to think it will be more along the lines of the Rasmussen scenario, where Obama’s approval rating is somewhere safely into the 50s but a lot of voters are just turned on by Brown or turned off by Coakley and don’t want to reward her for having run such a lousy campaign. It’s fine to ask whether Obama can save Coakley if his approval split is 44/43 — but in addition to using polls to ask questions about the political environment, we should also use the political environment to ask questions about the polls.