With Rod Blagojevich facing the triple threats of impeachment, court-ordered removal from office, and a federal indictment, the tribulations of the Illinois Governor may yet prove to have an effect on Barack Obama’s approval ratings — but the early signs are that Blago will have no tangible impact on the public’s perception of the President-elect. 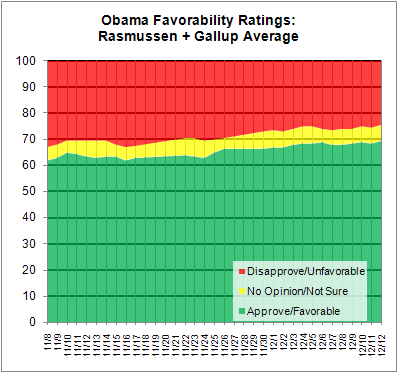 Indeed, with essentially three full days of interviewing having been conducted after Blagojevich’s arrest on on Tuesday morning, Obama’s approval ratings remain pristine. Gallup shows that 72 percent of the public has a favorable view of Obama, and 18 percent an unfavorable view. The 72 percent favorability rating matches the 72 percent score that Obama achieved on November 7th-9th for the highest since the election, whereas the 18 percent disapproval rating is Obama’s lowest yet. Three days ago, before Blagojevich’s arrest, those ratings were 70 percent and 21 percent, respectively.

Rasmussen, likewise, sees no change to Obama’s approval ratings. 67 percent of their voters now approve of Obama’s performance, and 31 percent disapprove, exactly matching Obama’s ratings from three days prior, and within a percentage point of his peak totals.