Thus far, I’ve tried to avoid making any sort of editorial comment on New York’s vacant Senate seat. This is not because I don’t enjoy making an editorial comment from time to time, but rather because I find myself agnostic on the whole affair. Caroline Kennedy strikes me neither as patently qualified nor as patently unqualified to hold a seat in the United States Senate. On the one hand, I tend to think that preference should be given to elected officials when appointing replacement senators. On the other hand, Kennedy, while not an elected official, has been a prominent public figure.

Three agencies — Siena, Marist and Public Policy Polling — have surveyed New Yorkers about what they think should happen with the Senate seat. Marist and Siena surveyed registered voters; PPP surveyed Democrats only. 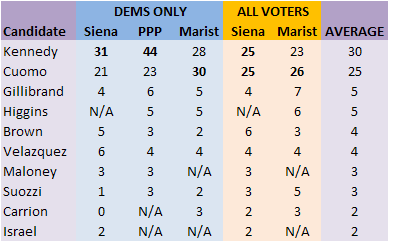 The surveys reveal little consensus among New Yorkers: Kennedy is preferred to Cuomo among Democrats in the Siena and PPP polls, but not in the Marist poll, and the two candidates appear to be about tied when the preferences of independents and Republicans are taken into account. A host of other candidates, like NY-27’s Brian Higgins and Buffalo Mayor Byron Brown, draw considerably less support, but because their name recognition is much weaker statewide than Cuomo or Kennedy, this is not necessarily damning.

So where does Larry King fit into all of this?

Well, just because you don’t have a vote for the seat doesn’t mean that you can’t have some elements of a campaign. Campaigns are good things; they do a pretty good job of vetting candidates, and sorting out public opinion. What bothers me about Kennedy — and the rest of the candidates for that matter — is that the process has been entirely confined to backroom dealings. Why does Kennedy need to call David Paterson to declare her interest in the position? Why can’t she hold a press conference instead, take a few questions, and explain why she thinks she’s the best woman for the position? Why can’t Cuomo do the same?

What I am suggesting, then, is that Kennedy and Cuomo — and ideally several of the other candidates — have a joint appearance on Larry King sometime between now and New Years’ Eve. You can call it a “debate” if you like; the advantage of someone like King is that he’d keep things fairly non-confrontational, which is probably a necessity since some of these people are allies and will not be inclined to tear each other to bits. Nevertheless, a joint appearance on King would provide for some minimal level of transparency and public scrutiny.

The joint appearance could be simulcast or co-produced with local PBS stations for New Yorkers who do not have cable television. CNN could then conduct a poll of New Yorkers both before and after the program, to see to what extent the appearance affected public opinion. What if Kennedy nails her appearance? What if Cuomo flubs his? What if a candidate like Higgins or Nydia Velazquez steals the show?

At a minimum, this would allow Paterson to make a better-informed decision. He would not necessarily be beholden to the results of the poll, but I think there is a reasonable chance that some sort of public consensus might emerge. There are dangers, certainly, in democracy-by-polling — but it is probably an improvement over democracy-by-fiat.