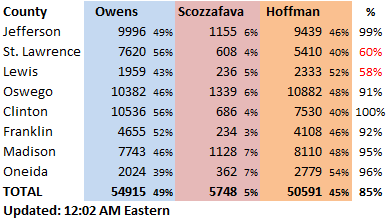 Note that the major outstanding stash of votes is in St. Lawrence County, where Owens has done very well all evening. There are also a goodly percentage of the vote left in Lewis County, where Hoffman leads 52-43, but there just aren’t that many voters there.

Most of the 5,800 or so absentee ballots throughout the district also haven’t been counted; I don’t know who that favors. But it looks to me like Hoffman is going to fall further behind when the rest of St. Lawrence comes in (which may not be until tomorrow; they’ve had some machine problems there) and the absentees — of which Scozzafava will have a decent share — won’t be enough to help him.

With mucho caveats, as always. I’m just one guy here trying to cover seven elections at once and call ’em as I see ’em in real time.

EDIT: For instance, Watertown is not in St. Lawrence County, as I previously reported. Hence, the caveatting.

UPDATE: Fox News has called it for Owens.

UPDATE: There’s been some confusion about the number of absentee ballots in the district. 10,000 were sent out, but 5,800 were returned.