Based on challenged ballot counts provided by FiveThirtyEight by the Scott Murphy for Congress campaign, it appears that the majority of ballot challenges in the special election in New York’s 20th Congressional District were made by the Republican Candidate, Jim Tedisco. As these changes are resolved by election officials, Murphy, the Democrat, will almost certainly add to his current 273-vote lead (.pdf). He appears bound for a narrow, but relatively unambiguous, victory. 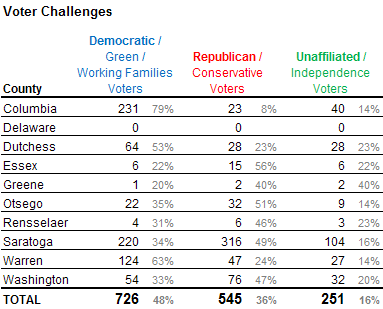 Although these numbers look good for Murphy, they actually somewhat understate the strength of his position. This is because Murphy has benefited from a significant number of Republican crossover voters; thus, a 12% partisan advantage in challenged ballots will translate into a wider margin once these ballots are actually counted. FiveThrityEight estimates that, of the absentee ballots that have actually been counted so far, 51% were cast by Republicans and Conservatives, versus 32% by Democrats, Greens, and Working Families Voters. And yet, it was Murphy, not Tedisco, who has picked up the majority of absentee votes, winning 2,848 to Tedisco’s 2,509.

Our best guess is that Murphy is winning about 94% of Democratic/Green/Working Families absentees, 60% of unaffiliated/Independence absentees, and 25% of Republican/Conservative absentees. This distribution would get him to the 53% share of absentee ballots he has claimed so far.

If we allocate the voter challenges based on these assumptions — while also assuming that 10% of challenges from will be deemed valid and will be upheld — we see Murphy gaining a net of between 350-400 votes. 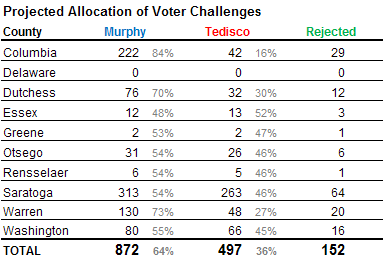 There are also a second type of challenges — these are so-called ballot challenges. These challenges are more like the type we saw in Minnesota, where one of the campaigns will challenge the propriety of the ballot itself, rather than the eligibility of the voter. Slightly more Tedisco ballots than Murphy ballots are the subject of this type of challenge. In addition, elections officials themselves have issued some ballot challenges; we have no information about which candidate had been selected on ballots challenged by officials. 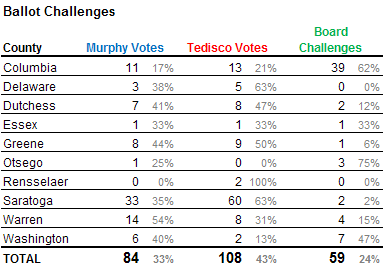 We project that Tedisco will gain between 10-20 votes from these types of challenges once they are resolved: 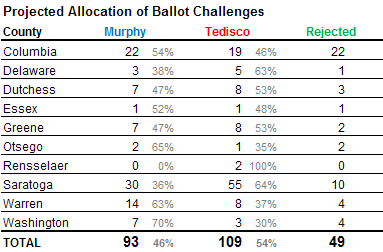 However, this is only a drop in the bucket compared with the much larger gains Murphy can expect from voter challenges. Overall, we have Murphy gaining another 360 votes from the challenge process, which would put his margin of victory in the low 600’s, or about 0.8% of all votes cast in the district. 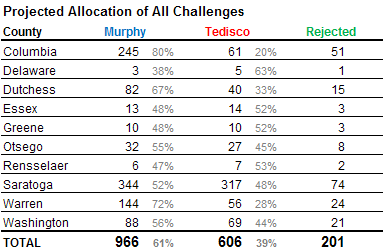 At this point, Jim Tedisco’s best strategy is to do whatever he needs to do to improve his chances in 2010 and beyond, something that probably requires the right combination of aggrievedness and graciousness. Barring an unanticipated legal intervention, he has almost no chance of winning this election.