The New York State Board of Elections has a lot of data (.pdf) out on absentee ballots in the special election in that state’s 20th Congressional District, which will be vital in breaking the virtual tie between Scott Murphy and Jim Tedisco. 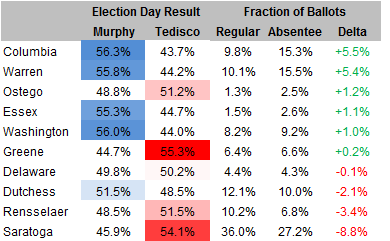 The absentee ballot counting process begins tomorrow. Murphy presently appears to lead by 83 votes, although the numbers have been fluctuating somewhat wildly. While nothing’s for sure yet, things are starting to look a bit difficult for Tedisco; he may need some good news from one of the two counties that have yet to finish re-canvassing their results, or a lot of help from military absentee ballots (of which only about 200 were returned).

(n.b. See also Campaign Diaries, which has a similar analysis)