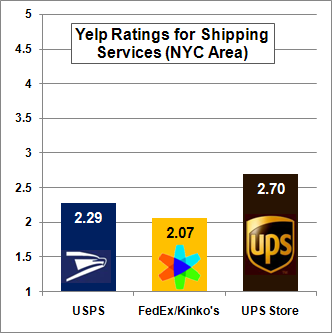 Paul Krguman compares his experience at the Post Office to that at FedEx and UPS:

Art Laffer (why is he, of all people, on my TV?) asks what it will be like when the government runs Medicare and Medicaid.

But I’d raise a further question: he warns that when the government takes over these, um, government programs, they’ll be like the Post Office and the DMV. Why, exactly, are these public functions unquestioned bywords for “something bad”?

Maybe I’m living a sheltered life here in central New Jersey, but I don’t find the Post Office a terrible experience — no worse than Fedex or UPS. (Full disclosure: I worked as a temp mailman when in college.) And nobody likes going to the DMV, but the one on Rt. 1 I go to always seems fairly well managed.

Maybe things are different in New Jersey, but my couple of experiences at the Post Office since moving to Brooklyn a few months ago have been really awful. The first time I went, to mail out my tax forms on April 15th, I had to stand in line for the better part of 20 minutes to buy a couple of stamps. The second time, when I had to mail out some forms for a passport renewal, the clerk “serving” me decided literally without warning or apology half-way through processing my forms that it was time for her break; it took a good 15 minutes, with most of my personal documents slid conspicuously under her window, before someone came to relieve her. The third time, when I had to send some corporate documents to Albany for my consulting business, things were going smoothly enough — until I actually had to fill out the shipping receipt, and discovered that there were literally no working pens available in the entire building. I had to go across the street and buy one.

There’s probably only one customer service experience that is routinely as bad as the Post Office: FedEx Kinko’s.

The last time I went to FedEx Kinko’s, the black & white printer was broken, the fax machine was broken, and the “high-speed” Internet connection — which I was being charged for by the minute — was about as fast as a dial-up line in Ulan Bator. And then I had to stand in line for 15 minutes to pay an arm and a leg for the privilege of having my time wasted. The clerks at the Court Street Kinko’s are actually quite sweet — but the location is chronically understaffed and undermaintained on one of the busier commercial thoroughfares in the Five Boroughs. There are also the simple things that FedEx Kinko’s doesn’t get right: why do I have to fill out shipping forms by hand — invariably transposing the ZIP+4 or something and having to start over again — instead of by computer, when the clerk has to key in everything I’ve written down anyway? This is the nineties 21st Century, damnit. FedEx does an admirable job of delivering packages — but the retail experience is a real black eye for the company.

And apparently, I’m not alone in these experiences. Yelp.com has compiled 237 ratings for a total of 67 distinct USPS locations throughout the New York City area. The average rating, on a scale of 1 to 5, is a 2.29. As Yelp raters tend to be fairly generous with most things, this is really bad. But the ratings for FedEx Kinko’s are even worse: an average rating of 2.07 (n=78). The UPS Store, at least, gets somewhat more decent marks (an avergae rating of 2.70), which matches my experiences, although UPS has a somewhat hipper brand and Yelp is notorious for having a pro-hipster bias.

All kidding aside, I do think the Post Office creates some small, residual level of disdain for the idea of government-run services. The level of funding seems manifestly suboptimal and probably ought to be increased. But if every private-sector business were run as badly as FedEx Kinko’s, we’d all be frickin’ Communists in no time.