Justin Fields’s impressive performance against Clemson in the College Football Playoff semifinals didn’t just wow football fans, it cemented his status as the consensus No. 2 quarterback prospect of this year’s NFL draft class. “Fields seemed to erase all the talk of his limitations with one of the gutsiest performances of the season,” wrote Yahoo’s Eric Edholm.

But when it comes to the popular belief in his eventual NFL success, Fields faces a bigger hurdle than even Alabama’s defense. Nothing he does on the field could erase his biggest perceived limitation: playing for Ohio State.

A quick Twitter search for “Ohio State quarterbacks” returns plenty of snark about Fields’s prospects in the NFL — especially given that his predecessor, Dwayne Haskins, was released from the Washington Football Team just days before. But is there any truth behind the social-media narratives already metastasizing into articles about Ohio State’s “quarterback curse?”

[Why Did NFL Teams Score So Much This Season?]

Since 2001, only five quarterbacks have been drafted out of Ohio State. Before Haskins was selected with the 15th pick in the 2019 draft, no other Buckeye QB this century had been taken any higher than the fourth round. And none of those other four left much of a mark at the next level: Cardale Jones, Troy Smith, Craig Krenzel and Steve Bellisari all failed to become regular NFL starters.

But that’s not evidence of a curse. It’s just what usually happens to college quarterbacks.

Given 130 Division I FBS football programs and just 32 NFL teams, the vast majority of college quarterbacks are just never going to find a long-term seat in that game of musical chairs. Using Stathead’s draft finder, we’re able to find the weighted career Approximate Value1 — Pro-Football-Reference.com’s single-number measure of player value — of all quarterbacks drafted since 2001, the year after Tom Brady, the oldest quarterback in the NFL, was drafted: 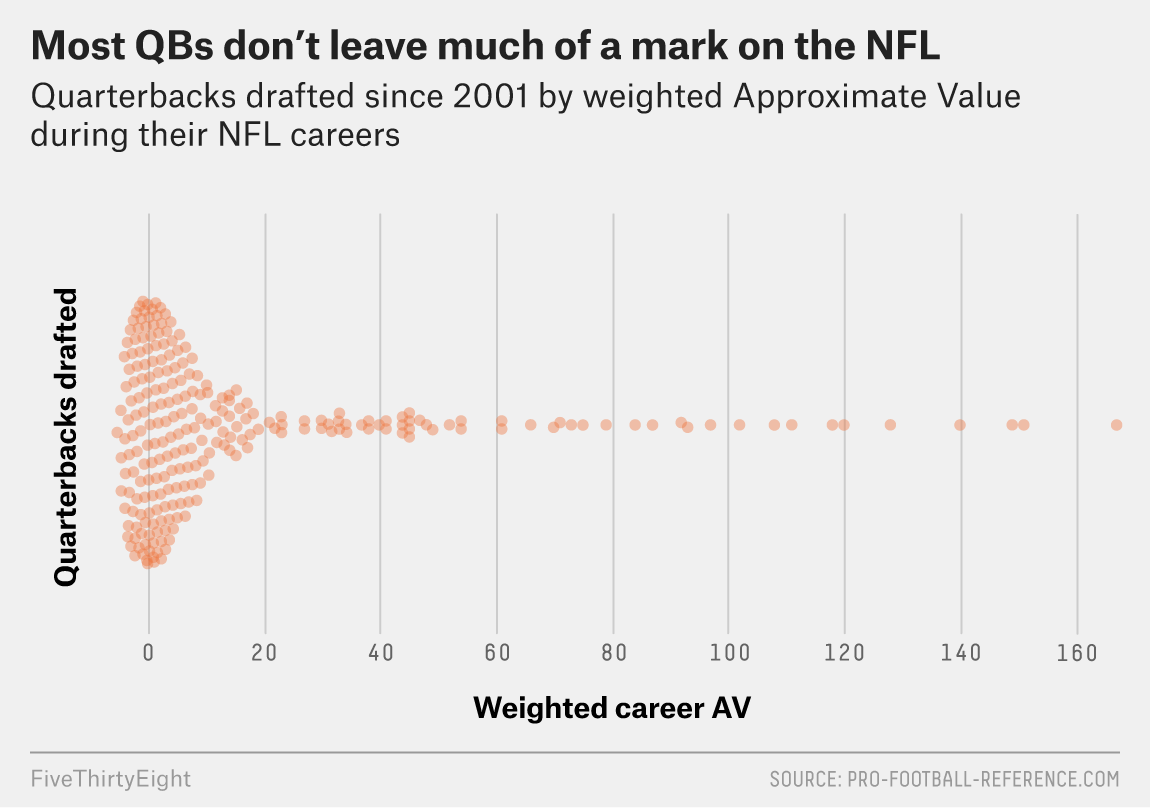 But given Haskins’s high-profile flameout, and Fields being another big-framed quarterback in the mold of Haskins and Jones, it’s worth checking to see if Ohio State is actually worse at turning out signal-calling prospects than other schools. 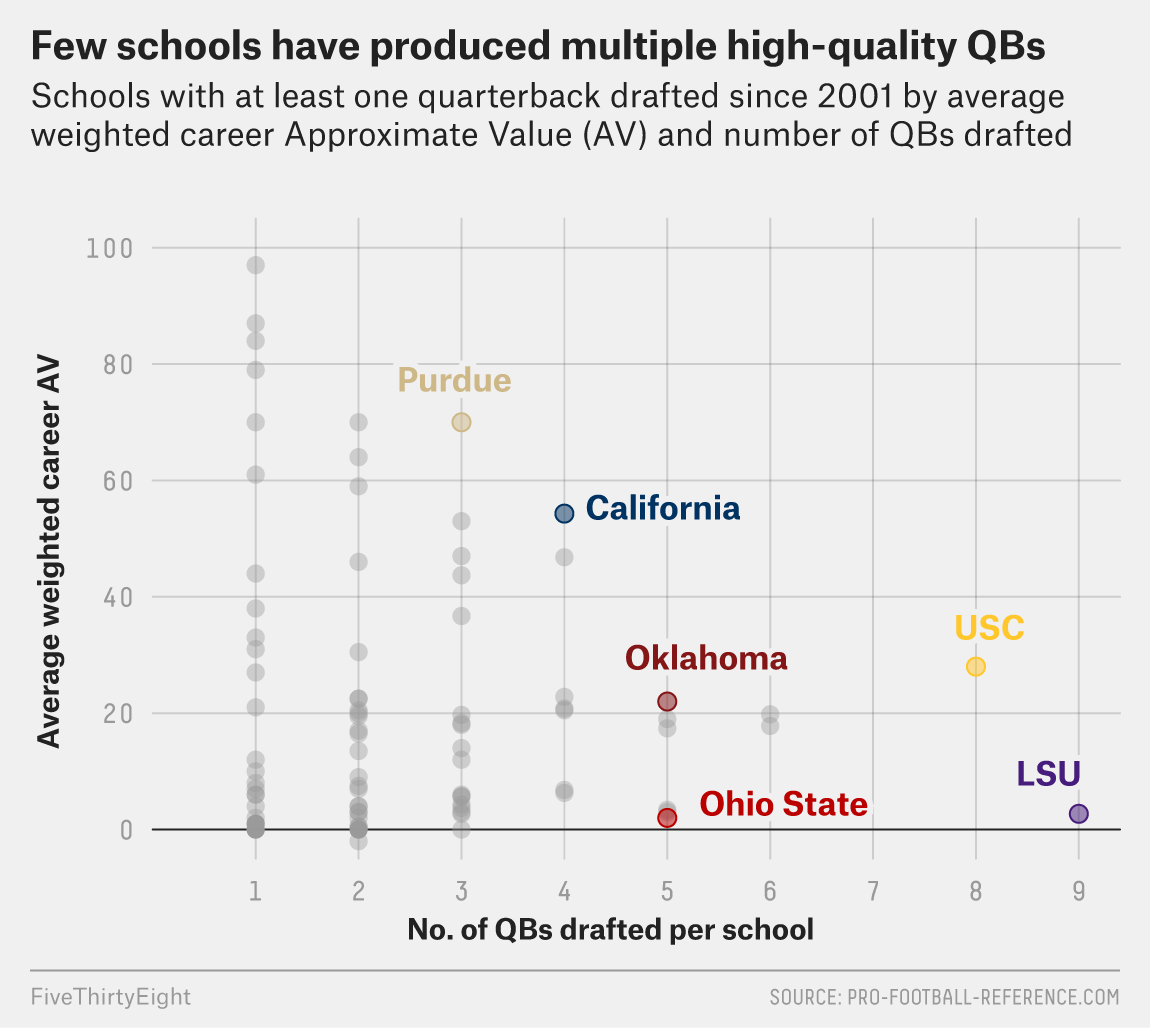 Purdue boasts the highest average weighted career Approximate Value of any school with three drafted quarterbacks. Kyle Orton (41 AV) and Curtis Painter (2) can thank Drew Brees (167) for helping them look so good. California’s average is lower, but it’s spread out a little more equally among four quarterbacks: Aaron Rodgers (151), Jared Goff (49), Kyle Boller (17) and Davis Webb (0). Among schools with five quarterbacks, Oklahoma’s have been the most productive — but with an average of just 22.0. Georgia has six quarterbacks on the list, all divvying up the weighted career AV of Matthew Stafford (102) and Quincy Carter (17).

As we can see, most of the schools with any significant production are relying on the total value of one all-time standout. After Brady, four quarterbacks were drafted out of Michigan, and only one has a nonzero weighted career AV (Chad Henne, 27). But throw Brady’s 179 into the group, and the resulting 41.2 average almost doubles Oklahoma’s five-QB mark.

[Ohio State Made The Committee Look Good — And Bad]

This is Ohio State’s problem. The measly 2.0 average of the five quarterbacks the school has sent to the NFL doesn’t represent an unusual level of failure. It’s that none of those five quarterbacks went on to become an exceptional success like Brady, Brees, Rodgers or Stafford. Any team that drafts Fields will certainly hope he starts for a decade or more — garnering Pro Bowl nominations, Super Bowl berths and Hall of Fame consideration along the way — but history shows that’s not the norm. Linking Fields’s future prospects to the past of a prospect like Jones, who played four years earlier under a different head coach, makes no sense.

If there’s a school “cursed” to consistently turn out draft-caliber quarterback prospects who never become regular starters, it’s LSU. A whopping nine passers from Death Valley have been drafted since 2001, and so far none of them have done any better than Matt Flynn (8 AV).2

On the flip side, if there’s such a thing as a good quarterback school, it’s USC. Carson Palmer’s weighted career AV of 108 anchors a class of eight, but it’s the relatively rich middle class of passers like Matt Cassel (45), Mark Sanchez (34), Sam Darnold (15) and Matt Leinart (12) that has the school’s average at 28.0 — the highest of any school with five or more drafted quarterbacks. That Leinart, a notorious draft bust, doesn’t significantly drag down USC’s average shows how hard it is for a quarterback to accomplish anything in the NFL.

Fields may or may not eventually play at a high level on Sundays. But there’s no reason to believe his odds are any worse because he wore scarlet and gray on Saturdays.