President Obama was soundly defeated in the first presidential debate in Denver, contributing toward about a four-point swing toward Mitt Romney in head-to-head polls — enough to turn the race from one in which Mr. Obama had a clear lead into a very close contest.

There are two theories about what that might mean for Tuesday night’s debate in New York — and next Monday’s in Florida.

One theory would hold that Mr. Obama is poised for a rebound. There are several logical mechanisms by which this could occur. First, expectations have been lowered for Mr. Obama’s performance — and raised for Mr. Romney’s. Next, the news media, having “called” the first debate for Mr. Romney, might be inclined to do the opposite in this case — fairly or not. Finally, as a general principle, polls have some mean-reversion tendencies, meaning that the bounces produced by news events have some tendency to fade with the passage of time.

The opposite theory — just as logical — is that Mr. Romney’s strong performance in the first debate is a leading indicator for what will happen in the last two. Perhaps he is simply the better debater — or perhaps he has the more persuasive message; the 90 minutes in Denver, after all, were the best moments of his campaign so far. If this theory is right, he could continue to dig a deeper hole for Mr. Obama.

Does the historical evidence allow us to adjudicate between these two theories, which come to opposite predictions about the outcome?

In the chart below, I’ve listed the change in national polls before and after each presidential debate since 1976. (I exclude the debate of Sept. 21, 1980, when the incumbent, President Jimmy Carter, did not participate but the independent, John Anderson, did.)

The data in the chart should be similar to a previous analysis that I did about the impact of presidential debates, but I’ve had to be a little more careful to resolve a potential ambiguity. In the original analysis, I looked at the before-and-after polls for the first debate only. However, in some cases, some of the polls that I used in the “after” column were also conducted after the second debate, blurring the distinction between them. Thus, I’ve rerun the numbers with more precision about exactly when the polls were conducted. (The polls listed in the “after” column for the first presidential debate, for instance, now consist of surveys that began their interviewing within a week following the first presidential debate — but which ended it before the second one.)

The issue is that Mr. Clinton had an extremely strong second debate in 1992 — a town-hall-style debate in Richmond, Va. All of his gains in the polls came after that debate — not after the first one, in St. Louis. In fact, this analysis now has Mr. Bush gaining ground after the first debate, reducing his deficit with Mr. Clinton in the polls to about 10 percentage points from 13.

Mr. Clinton expanded his margin to 16 points after the Richmond debate, however — a 6-point bounce.

But those gains were temporary. Mr. Bush rebounded to within 10 points of Mr. Clinton following the third and final debate in East Lansing, Mich., and eventually lost the election by only about 5 points.

Thus, the sequence of debates in 1992 constitutes strong evidence for the hypothesis that Mr. Obama will rebound.

In other years, however, one candidate remained on a winning streak. John Kerry is evaluated as the winner of both the first and second presidential debates in 2004, for example; the same goes for George W. Bush in 2000, and Barack Obama in 2008, although John McCain gained slightly after the third presidential debate that year.

The next chart shows the change in polls from one debate to the next one. It illustrates a negative correlation, meaning that there is a tendency for the winners of the debate to reverse. 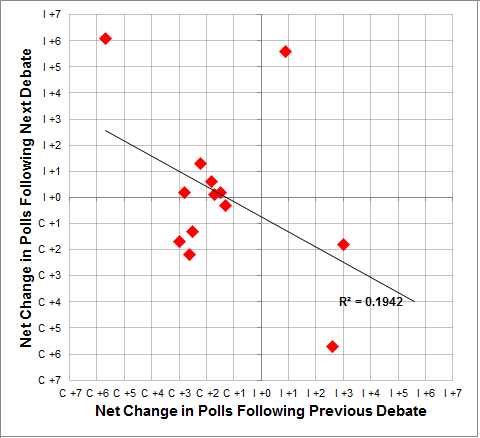 However, the tendency is only modest, and it is not very robust — the negative relationship comes solely as a result from the sequence of debates 1992. Otherwise, the candidate who wins one debate has been about as likely to win or lose the next one.

Mr. Obama will likely need a stronger performance in at least one of the final two debates to make himself feel at all secure on Election Day.

You can argue the case that if Mr. Obama has one A-level performance left in him, and one league-average one, he’d prefer to save the best for last. If there is a tendency for the winner of the debates to reverse themselves, then a loss in the first debate for Mr. Obama might predict a win for him in the second one. But by the same logic, a win for Mr. Obama in the second debate would then predict another loss in the third one.

But it’s presumptuous to assume that Mr. Obama will have the luxury to pick and choose: it may be that he’s simply not as strong in this format as Mr. Romney is, in which case every moment spent on the debate stage is a negative for him.

If there is reason to suspect a rebound for Mr. Obama, it is probably based more on election fundamentals than the debates themselves. Mr. Obama’s approval ratings are just strong enough, and the economy has shown just enough resiliency, that he might be a narrow favorite on each basis. One function that debates can serve is to bring elections more into line with the fundamentals.

There is no evidence, incidentally, that the second presidential debate is any less important than the first one. On average, it has moved the polls by 2.3 percentage points in one direction or another — almost exactly the sam
e as after the first debate, which moved them by 2.4 percentage points on average.

The third debate, however, has often had a more muted impact. The only significant change in the polls following the third debate was in 1992, when Mr. Bush narrowed his deficit with Mr. Clinton, and that may well have reflected a case of reversion to the mean.