It’s a fun story: the idea that Republicans, perhaps because of the discouragement of people like Michelle Bachmann and Ron Paul, are slacking in returning their Census forms. But, save for some anecdotal evidence in a few locales, it’s just not clear that it has the virtue of being true.

Here, taken from the Census Bureau’s website, is the percentage of households who have mailed back their Census form in each state. Nationwide, 50 percent of forms have been mailed back to date. Thirteen of 21 red states (states which voted Republican in each of the last three elections) are above that threshold, however, and their average is slightly higher than the nation’s at 51 percent. 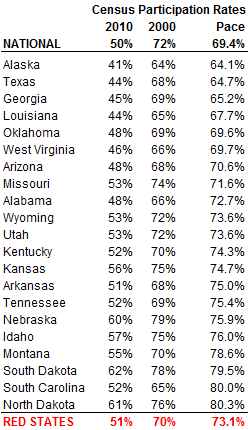 There could still be evidence of a partisan shift in participation if it happened that red states were ordinarily quicker to turn in their Census forms and had fallen off their usual pace. But that does not appear to be the case either. In 2000, the red states were actually a bit behind the curve in terms of participation — 70 percent of households turned in their forms without further prompting — versus 72 percent of households nationwide. So, the red states have gone from slightly below-average to slightly above, rather than the other way around.

This wouldn’t preclude the presence of highly localized effects in participation. Texas, where Paul is from, is indeed a bit low, although that’s true of both red and blue areas of the state. Minnesota’s participation rate of 56 percent is quite a bit above average, although lower than that of each of the states which it borders.

On the whole, however, this claim isn’t supported by the evidence. And perhaps we shouldn’t be surprised. Consider the consequence of failing to mail back your Census form: you’ll have a government bureaucrat come knocking on your door, a prospect that ought to be truly terrifying to the residents of Bachmannistan.