It is not typical for an NHL defenseman — or any athlete, for that matter — to drastically improve at the age of 30. While defensemen tend to peak later and play at a level that more closely resembles their prime deeper into their 30s than other NHL skaters, the fourth decade of a hockey player’s life usually corresponds with the end of their playing days.

Of course, there are exceptions to every rule, and Washington Capitals defenseman John Carlson is proving that this season: The D.C. blueliner, who turns 30 on Jan. 10, is having one of the best offensive seasons for a defenseman in NHL history, particularly after adjusting for leaguewide scoring levels. He’s also having one of the most valuable D-man campaigns in NHL history if we account for the rest of his stats. Basically, by any metric, Carlson is making history. And even more amazingly, he’s doing so as a relatively old guy.

With 52 points (13 goals, 39 assists), Carlson currently leads the Washington Capitals in scoring — 12 points clear of left wing Alex Ovechkin, himself one of history’s greatest scorers. Carlson’s 1.21 points per game is tracking to be the first season above the 1.2 threshold by a defenseman in 25 years. At this pace, he would notch 99 points by season’s end, which would be the most by a D-man since Brian Leetch had 102 points in the 1991-92 season.

And although scoring is up this season, it’s still a far cry from what it was in the early 1990s. So according to Hockey-Reference.com’s Adjusted Points stat, which translates every player’s totals to a hypothetical league where both teams combine for exactly six goals per game, Carlson is currently enjoying the ninth-best defenseman scoring season since 1943 (the first year of the NHL’s Original Six era). The only blueliners with more adjusted points in a season? Just a couple of guys you may have heard of before: Bobby Orr and Paul Coffey.

Carlson’s offensive numbers jump off the page, and he’s certainly known more for his puck-moving skills than his defensive grit. But he has also registered a plus-16 rating, which ranks 10th among defensemen this season, and the team is allowing only slightly more 5-on-5 goals per minute with him on the ice than without, despite his many forays deep into the offensive zone. Nobody would claim that Carlson is a shutdown defender, but his all-around performance has been worth 28.2 adjusted goals above replacement (GAR),1 which estimates the total net goals added or saved by each skater and goalie based on his box-score stats and prorates to an 82-game schedule. That leads all defensemen, and it ranks second to the Bruins’ David Pastrnak among all players, regardless of position.

Carlson’s current form is impressive by any definition, but it’s ludicrous when compared with the greatest-ever seasons posted by old-guy defensemen, which we’re defining as defensemen who were at least 30 years old as of Feb. 1 during a given regular season.2 Indeed, Carlson is having the best old-guy defenseman season in NHL history in terms of GAR — and doing so by some margin.

Now, it’s not as though Carlson was a total nobody before producing this monster season. From the beginning of his first full NHL season in 2010-11 through last season, Carlson ranked eighth in total points scored and was 15th in points scored per game among defensemen who have played at least 200 games; he’s finished among the top five Norris Trophy vote-getters in each of the past two seasons (and is the front-runner for the award this season); and he was a crucial piece of the 2017-18 Capitals team that finally ended D.C.’s 43-year wait for a Stanley Cup. But Carlson was never the clear-cut best defenseman in the NHL — much less in the same conversation as Orr or Coffey — until this season.

Among the six other players to post top-10 all-time great old-guy seasons above, none experienced an uptick in GAR greater than seven goals from their previous career high, and most experienced a regression in the seasons after their post-30-year-old peak. It’s unclear if or by how much Carlson will regress in 2020-21 — more on that later — but what is clear is that his GAR has skyrocketed, up 11.5 points from a season ago, which itself was a career high. It’s by far the largest increase among the elite old-guy group. 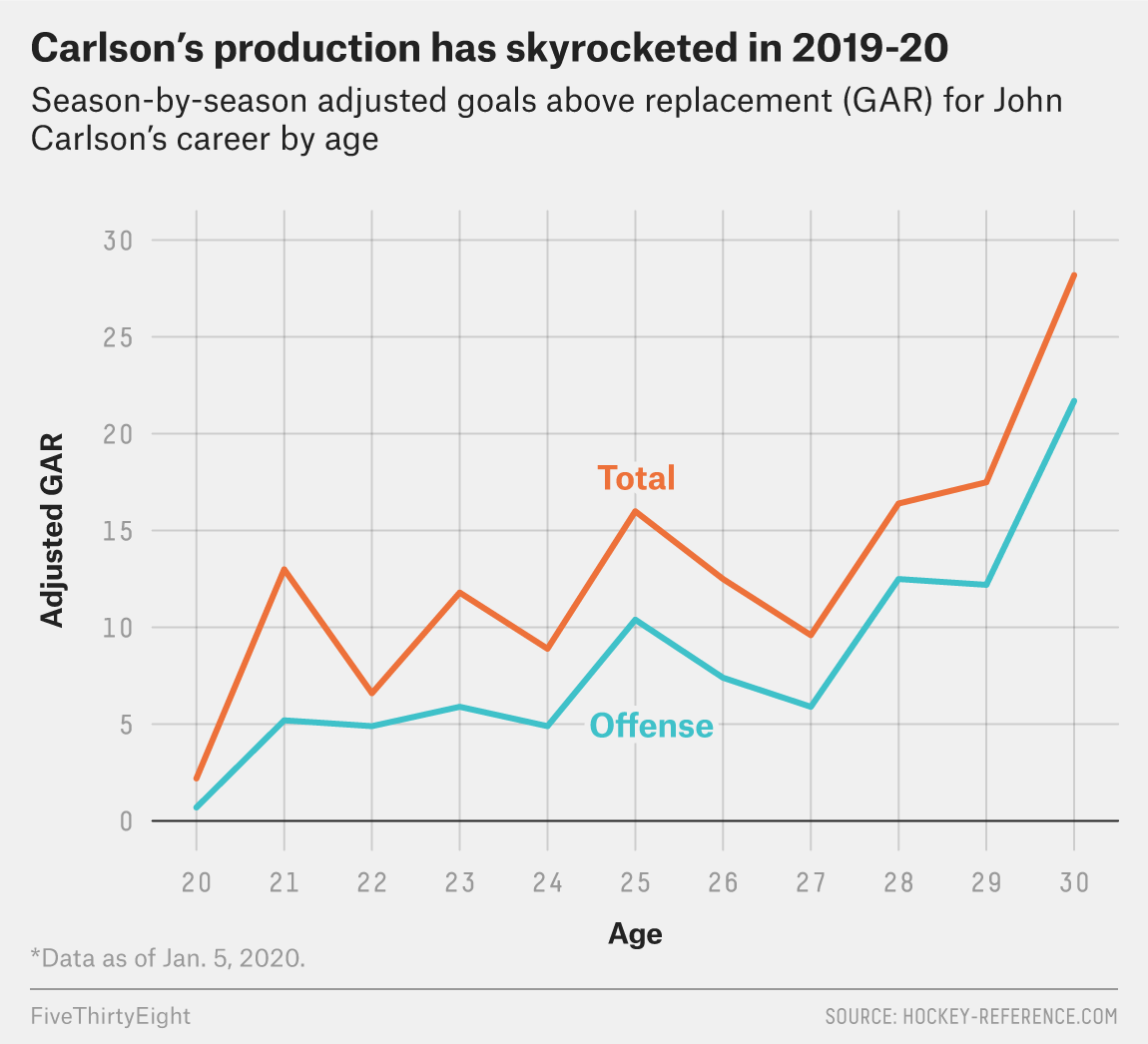 Carlson, on the other hand, has scored just 31 percent of his points on the power play this season. Power play opportunities are at a near-historic low, which helps account for Carlson’s dearth of power play points relative to other all-time great old-guy defensemen. Carlson is already en route to a mind-boggling old-guy season — but it could have been even more impressive if he had played in the same era as Coffey, Bourque and MacInnis. (We’re guessing a shooter like Carlson would have loved to face the goaltenders of the 1980s and early ’90s.)

It’s worth keeping in mind that Carlson is firing the puck in with far greater accuracy this season than he has in the past: He’s scoring on 10.5 percent of his shots, 3.5 percentage points higher than his next-best season. Because shooting percentage tends to regress to the mean, it’s not a question of if Carlson’s goal scoring production will drop off, but rather when it will drop off.

That said, it’s reasonable to assume that Carlson’s rate of assists per game will hold relatively steady because Washington has built a team that consistently shoots the lights out. The Capitals currently rank second in the NHL in shooting percentage, scoring with 11.1 percent of their shots — and they haven’t ranked lower than fourth since the 2013-14 season. Among players with at least 800 minutes across all situations, only 11 players have been on the ice for a higher team shooting percentage than Carlson. He might not continue burying his own shots at such a blistering pace, but there’s ample reason to believe his teammates will continue burying theirs, which means more helpers and more points.

It’s possible that Carlson is peaking and will never again be as good as he has been this season. But it’s also possible that he’s on the cusp of a rare old-guy renaissance. After all, there’s evidence in the careers of other great old-guy defensemen to suggest that Carlson could keep this up well into his 30s. Coffey had his second-best season in terms of point shares at age 33, MacInnis won his first and only Norris Trophy at age 35, and Nicklas Lidstrom won each of his seven Norris Trophies after he turned 30.

Carlson is unlikely to skate into Coffey or Lidstrom territory (much less Orr), but MacInnis territory could be within reach. A lone Norris Trophy is still a Norris Trophy, after all. And if Carlson keeps playing the way he has this season, on an apparent quest for all-time old-guy defenseman supremacy, a Norris Trophy might not be the only hardware he collects.