A couple of people whose opinions I respect (including one of my colleagues) are starting to jump on the Newt Gingrich in 2012 bandwagon. I’m not there yet — and I don’t think the numbers are there either.

Mind you, I can somewhat see the logic. Mitt Romney has Romneycare problems in addition to all the other problems that made him Mr. Silver Medal in 2008. Mike Huckabee has performed surprisingly poorly in straw polls and there is reason to doubt whether he’s going to run in the first place. Sarah Palin has electability problems that even the Republican base is starting to perceive. And, while there are a number of other candidates — from Tim Pawlenty to Mitch Daniels — who could presumably leapfrog the putative front-runners, none of them start with the name recognition that Gingrich does.

But Gingrich, I think, has just as many problems. For starters, he has marginally the worst favorables with GOP voters among the four major brand-name competitors. (The numbers below are simple averages of all polls of Republican voters taken over the past year, with a maximum of one entry per polling firm.) 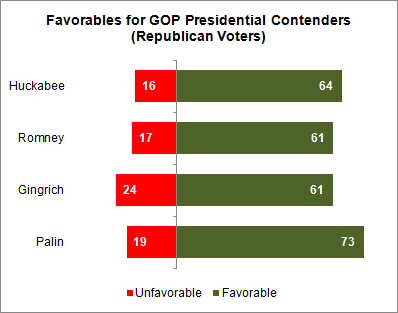 Gingrich also ranks third of the four candidates — ahead of Palin, of course — in favorability among the broader electorate: 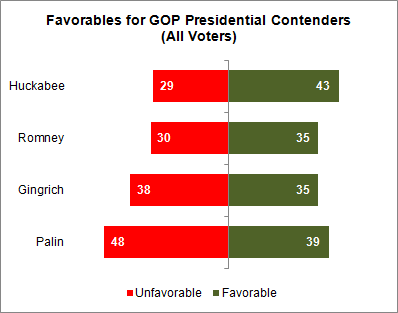 Moreover, he has baggage. The Republican brand is doing marginally better of late, but as recently as 2-3 years ago, when it wasn’t, voters associated Gingrich with some of its less desirable qualities and his favorablity ratings were squarely in the red: 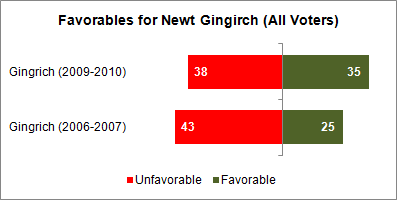 Republicans do not view him as any more electable than Huckabee or Palin (Romney dominates this category) — this data is from the Clarus poll that I teased earlier: 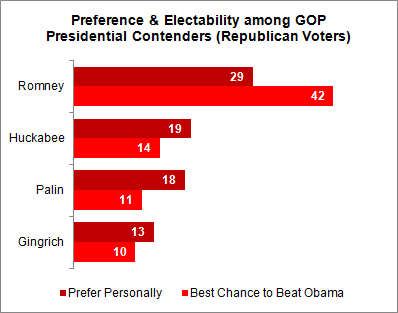 Basically, I think Gingrich is fairly close to being a dominated strategy. If Republicans just want to pick the candidate they like the best personally — electability be damned — they’ll go with Sarah Palin. If they want someobdy who they think can win, they’ll hold their nose and vote for Romney. And Huckabee, not Gingrich, seems to be their second choice in both those departments. Nor do I think that Gingrich can credibly be re-branded as a fresh face if that’s the direction in which Republicans want to go; voters (both Republicans and the broader electorate) remember him pretty well, even though his peak of political activity came around 15 years ago. Finally, he’s easily the least electorally accomplished of the four brand name candidates, having never been elected to an office higher than the U.S. House, and from an easy district at that.

As I’ve been saying for some time now, I continue to think that the Republican nomination will be contested principally by Mitt Romney, Sarah Palin and X, where X is relatively unlikely to be Mike Huckabee (who I think is somewhat unlikely to run), Tim Pawlenty (who I don’t think has the charisma to pull himself out of his name recognition deficit — but we’ll see) or Gingrich. If Palin indicates that she will not run, that certainly opens up a slot for a base candidate and Gingrich might then become more viable. But I think it’s going to be hard for him to run when Palin is running as well. He’s playing for somewhat the same half of the Republican electorate that she is, but he generates less enthisiasm — and his electability argument is no more than marginally better, and could backfire if he presses the point too much and appears insulting to Palin in the process.