A meme that is currently picking up traction in the conservative blogosphere is that the list of dealerships to be shuttered as a result of Chrysler’s bankruptcy contains a disproportionate number donors to Republican candidates. There have been furious efforts to prove this contention by looking up campaign contributor lists at the Huffington Post, Open Secrets, and other places.

There is just one problem with this theory. Nobody has bothered to look up data for the control group: the list of dealerships which aren’t being closed. It turns out that all car dealers are, in fact, overwhelmingly more likely to donate to Republicans than to Democrats — not just those who are having their doors closed.

Here, for instance, is what Huffington Post’s Fundrace site turns up for those who list their occupation as “auto dealer”: 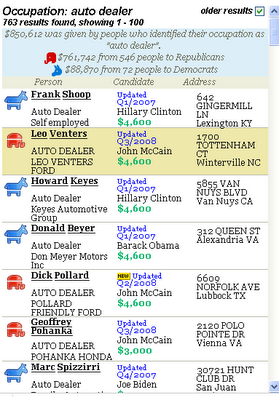 Republican donations outstrip Democratic ones by about 8.6:1. Next, let’s try “car dealer”: 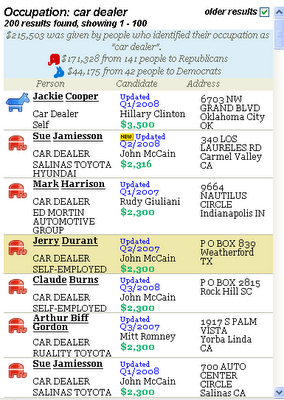 For some reason, those persons who describe themselves as “car dealers” are just slightly more likely to donate to Democrats than those who call themselves “auto dealers”. Nevertheless, the list of contributions tilts Republican by better than a 3:1 margin.

Next up, “automobile dealer”: 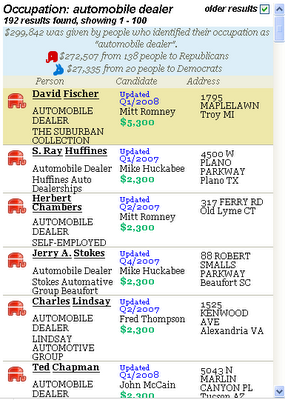 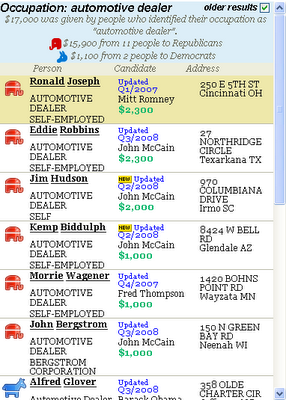 Overall, 88 percent of the contributions from car dealers went to Republican candidates and just 12 percent to Democratic candidates. By comparison, the list of dealers on Doug Ross’s list (which I haven’t vetted, but I assume is fine) gave 92 percent of their money to Republicans — not really a significant difference.

It shouldn’t be any surprise, by the way, that car dealers tend to vote — and donate — Republican. They are usually male, they are usually older (you don’t own an auto dealership in your 20s), and they have obvious reasons to be pro-business, pro-tax cut, anti-green energy and anti-labor. Car dealerships need quite a bit of space and will tend to be located in suburban or rural areas. I can’t think of too many other occupations that are more natural fits for the Republican Party. Unfortunately, while we are still a nation of drivers, we are not a nation of dealers.