One of the biggest takeaways from the congressional redistricting process thus far has been that neither party has made major gains. But the congressional map that New York legislators just introduced is so skewed toward Democrats that it could single-handedly change that.

New York is, of course, a blue state; it gave President Biden 61 percent of the vote in the 2020 presidential election. But if it becomes law (a good possibility but far from a certainty; read on), this map would put Democrats in position to win between 77 percent and 85 percent of New York’s congressional seats. The map creates 20 districts with a FiveThirtyEight partisan lean1 of D+5 or bluer and only four districts with partisan leans of R+5 or redder. There would also be only two highly competitive districts (between D+5 and R+5), and both of those would tilt toward Democrats too (with partisan leans of D+3 and D+4). 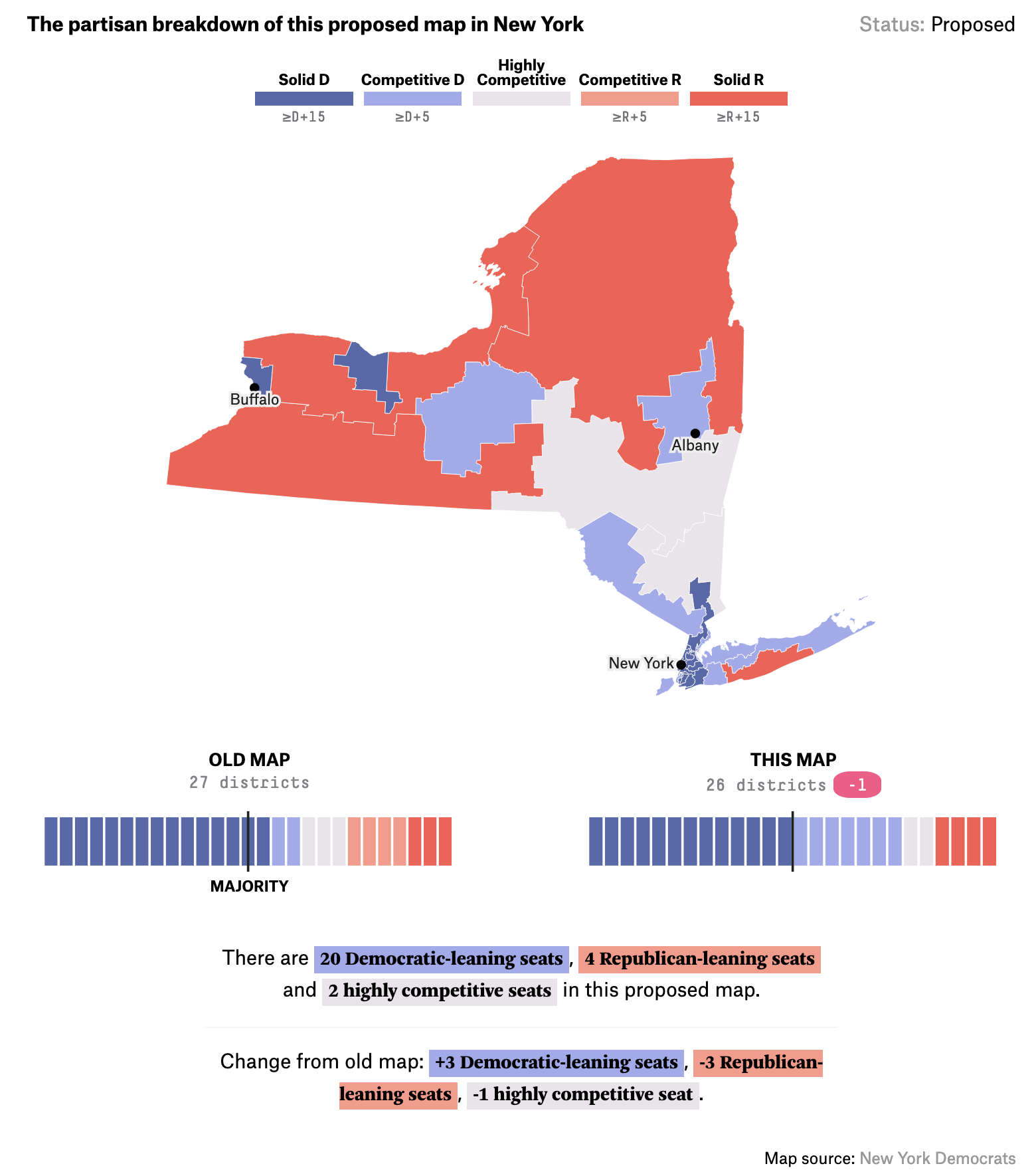 I had previously calculated that redistricting alone would hand Republicans two new House seats (give or take) in the 2022 midterms, while Democrats would roughly stand pat. (This is before accounting for the likely Republican-leaning national political environment.) Add this map to the mix, though, and Democrats would be poised to gain about three seats nationally and Republicans would be poised to lose around two.

In general, though, New York Democrats were ruthlessly efficient at drawing this map. The Cook Political Report’s Dave Wasserman found only a few places where the map could be tweaked to shore up Democrats, and even then, the potential gains were minimal. The map was also cleverly designed to minimize the risk that any light-blue districts could fall to Republicans in a red-wave election. The two Democrats who represent the two most vulnerable districts under this map (the two highly-competitive-but-Democratic-tilting seats) are Reps. Antonio Delgado and Sean Patrick Maloney. Delgado was one of House Democrats’ strongest incumbents in 2020, running 10 percentage points ahead of Biden, while Maloney is the chair of the Democratic Congressional Campaign Committee and therefore will have access to googobs (a technical term) of money. The next-most competitive districts, the 1st and 11th, are probably too blue for Republicans to win under normal conditions, though it would be possible in a very pro-Republican year.

The fact that New York could end up with such an egregious congressional map represents a failure for the state’s new redistricting process. In 2014, New Yorkers voted to create a bipartisan redistricting commission tasked with drawing new congressional maps and submitting them to the legislature. However, this commission proved unable to agree on a single map. In its first round of map-drawing, the commission’s Democratic members and Republican members each recommended a different map — both of which were voted down by the legislature. In its second round of map-drawing, the commission failed to submit any maps to the legislature, with each party’s commissioners accusing the other of acting in bad faith.

But the commission was likely doomed from the start, anyway, because its recommendations were totally nonbinding. If the legislature voted down both the commission’s first- and second-round maps, the legislature could simply draw its own map — which, of course, is what it did. (Republicans on the redistricting commission argued that this was the reason Democratic commissioners didn’t compromise on a map.) It’s yet another reminder that redistricting reforms need to be well designed to have their intended effect.

Because the same party (Democrats) controls both the New York state Senate and state Assembly, this map most likely3 needs to receive two-thirds support in both chambers in order to pass. This is another provision of that 2014 ballot measure meant to get new maps to pass with bipartisan support — except it, too, was fundamentally flawed, since if the party in power had a legislative supermajority, no opposition-party votes would be required. And right now, New York Democrats do indeed have supermajorities in both chambers.

However, this map’s passage isn’t guaranteed. Democrats’ supermajority in the state Senate is narrow; they have 43 seats, but the two-thirds threshold is 42 (out of 63 total seats). That means only two Democrats would need to vote against the map to sink its chances. This isn’t outside the realm of possibility. One of the chamber’s Democrats, state Sen. Simcha Felder, is quite conservative and often votes with Republicans. And some liberal Democrats may find it too hypocritical to vote for such a biased map when Democrats have branded themselves so strongly as the party of fair maps in recent years.

But even if the proposal passes, that doesn’t necessarily mean it will survive legal muster. Just as Democrats have sued to overturn Republican-biased maps in states like North Carolina and Ohio, Republicans would presumably file a lawsuit against this map for being a partisan gerrymander. The New York state constitution states, “Districts shall not be drawn to discourage competition or for the purpose of favoring or disfavoring incumbents or other particular candidates or political parties.” It also requires districts to be contiguous and “as compact … as practicable,” criteria that certain districts in the new map may not satisfy. For instance, the new 3rd District jumps across the Long Island Sound to connect Westchester County and Long Island, while the new 10th District snakes from the Upper West Side of Manhattan to the Bensonhurst neighborhood of Brooklyn.

It’s unclear what chance such a lawsuit would have of succeeding, considering that the seven judges on New York’s highest court were all appointed by Democratic governors. But what’s certain is that it’s too hasty to consider this map a done deal. To follow this map’s progress through the New York state Legislature and judiciary, as well as other states’ maps’ progress, keep checking our redistricting tracker.