New York Mayor Bill de Blasio is in a tight spot politically after the fatal shooting of two New York Police Department officers, Wenjian Liu and Rafael Ramos, on Saturday. In an effort to close the divide between himself and the city’s police, de Blasio on Monday called on those protesting a grand jury’s decision not to indict an NYPD officer in the choking death of Eric Garner to suspend their demonstrations.

De Blasio’s problem is that many of these marchers are part of his political base, while the NYPD’s base of support is quite different. That is, if a voter approves of the job the police are doing, then he or she is very likely to disapprove of the job the mayor is doing.

This can be seen in a recent Quinnipiac University poll in which support for both the police and de Blasio were split nearly down the middle. Fifty-one percent of voters approved of the job the police were doing, while 41 percent disapproved. A similar 47 approved of the job the mayor was doing, while 38 percent disapproved. Among the 17 subgroups (age, borough, political identification, race, sex, etc.) released by Quinnipiac, support for one is the inverse of support for the other. 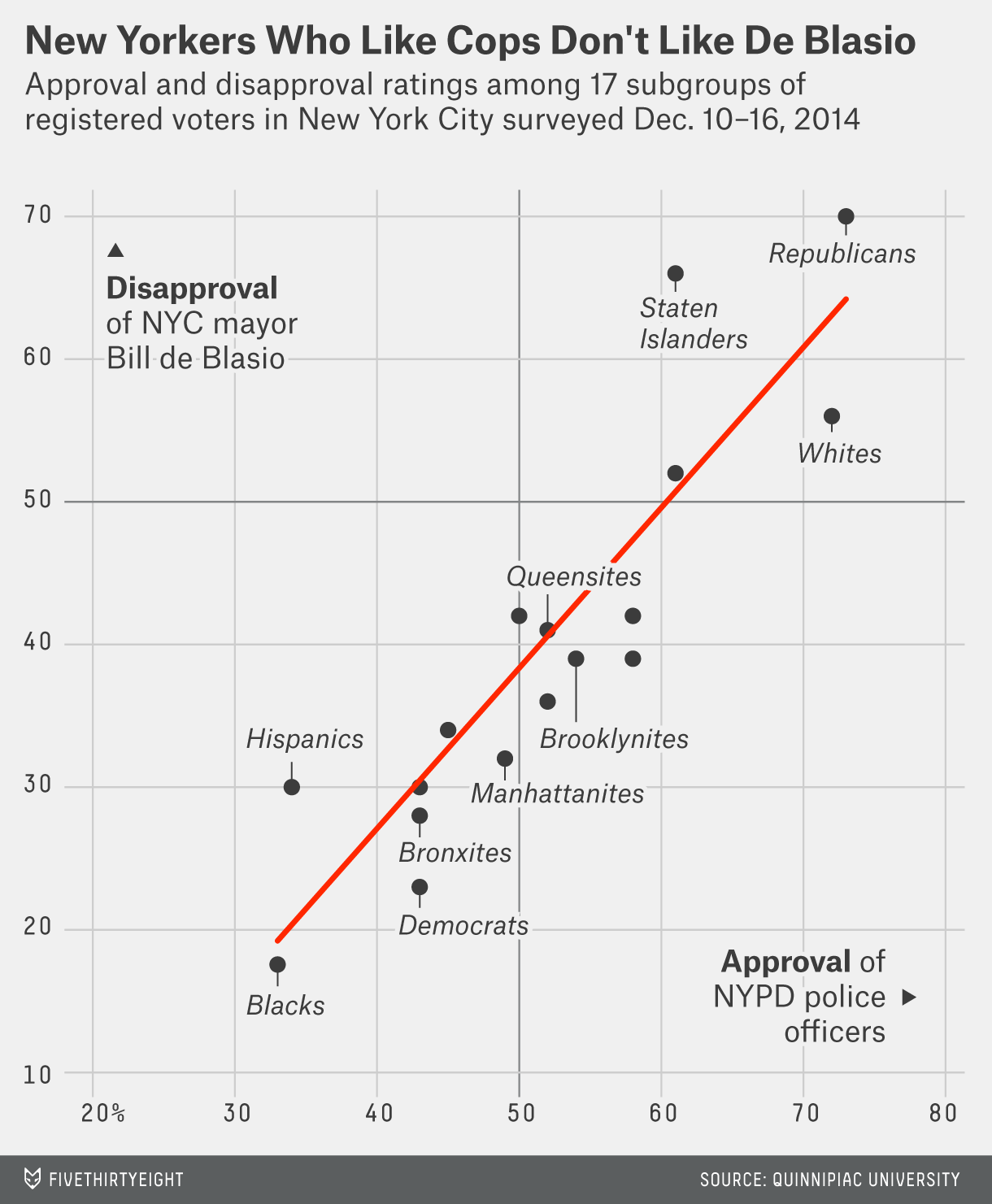 Support for the police is highest among older voters, Staten Islanders, Republicans, whites and males. These are the same groups in which support for de Blasio is lowest. De Blasio does best among young voters, Bronxites, Democrats, African-Americans and women, which is where police approval is lowest.

The NYPD may see its approval ratings jump as New Yorkers sympathize more with the police in the wake of the officers’ deaths. And de Blasio’s call to halt the protests may end up hurting him among his base.

But because approval is so polarized, neither the mayor nor the cops may see their numbers move much at all. Views may be locked in. Even with the decision in the Garner case and the protests that followed, we haven’t seen much movement in popularity for de Blasio or for the NYPD since August.

These divisions aren’t new. Support for the police in New York is almost always higher among whites and Republicans, and support for Democratic politicians is almost always strongest among minorities and Democrats. What is new is that New York has a Democratic mayor, the first since 1993. Former mayor Rudy Giuliani was so friendly with the police that he led their rallies. And de Blasio’s predecessor, Republican-turned-independent Michael Bloomberg, had support that cut across normal partisan and demographic lines.

But the divisions so evident now were also apparent when de Blasio was campaigning for office and promising police reform, such as curtailing the NYPD’s use of stop-and-frisk tactics. The rift has been around for awhile, and it won’t be easy to heal.