The strategist Karl Rove and his allies last week announced the formation of Conservative Victory Project, a new “super PAC” designed to lend support to what they see as more electable candidates in Republican Senate primaries.

The effort makes plenty of sense on the surface. Republican primary voters nominated a series of inexperienced and extremely conservative candidates in Senate races in 2010 and 2012, often with the support of the Tea Party and other insurgent groups. It can be argued that they lost as many as a half-dozen Senate races as a result, including the contests in Delaware and Nevada in 2010 and in Missouri and Indiana last year.

But conservative groups and activists have reacted very harshly to the announcement, while some conservative candidates who are potential targets of the group, like Representative Steve King of Iowa, have already sought to raise money off the backlash to it.

An analysis of Republican Senate primaries in 2010 and 2012 suggests that money is usually the least pressing problem for the incumbents and other establishment-backed candidates whom Mr. Rove’s group might be inclined to support. Instead, some insurgent candidates won their races despite having been at more than a 10-to-1 fund-raising disadvantage heading into the primary.

The table below reflects 23 Senate races between 2010 and 2012 in which an establishment-backed candidate squared off against an insurgent candidate in a Republican Senate primary. There are some judgment calls required in selecting the races, particularly because the Tea Party consists of no one single group but instead an informal network of organizations that tend to back highly conservative candidates. In other cases, some candidates, like former Representative Pat Toomey in the Pennsylvania Senate primary in 2010, tended to be supported by both Tea Party and establishment groups; these instances are excluded. The list includes a number of relatively obscure candidates. I do require, however, that the candidates listed were viable enough to have filed at least one fund-raising report with the Federal Election Commission. 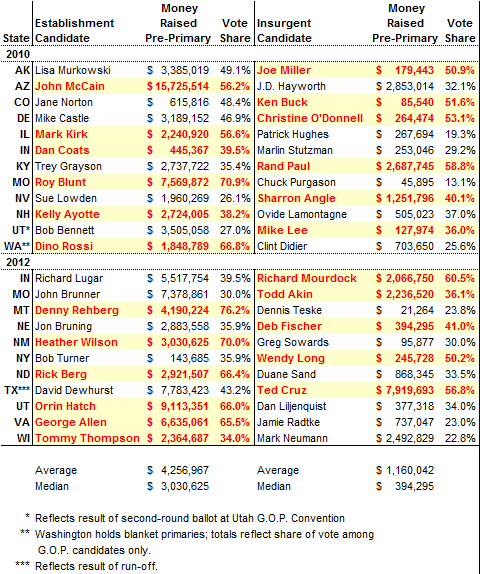 These issues aside, the overall message from the data should be reasonably clear. The establishment candidates substantially outraised the insurgents, by an average of $4.3 million to $1.2 million based on the last Federal Election Commission reports that the candidates filed in advance of the primary. (The difference in median fund-raising totals, which reduces the influence of outliers, is just as substantial: about $3 million for the establishment candidates versus about $400,000 for the insurgents.)

And yet, the insurgent candidates won 11 of 23 races, or nearly half the contests. Joe Miller of Alaska did so in 2010 despite being at nearly a 20-to-1 fund-raising disadvantage against the incumbent Lisa Murkowski. Christine O’Donnell of Delaware defeated Representative Mike Castle that year despite having raised about $260,000 to Mr. Castle’s $3.2 million.

Does that mean there is literally no benefit to having more money in a Republican primary? Not exactly; as the chart below suggests, there is a modest but positive correlation between the share of the funds that went to the establishment candidate and that candidate’s margin of victory or defeat. 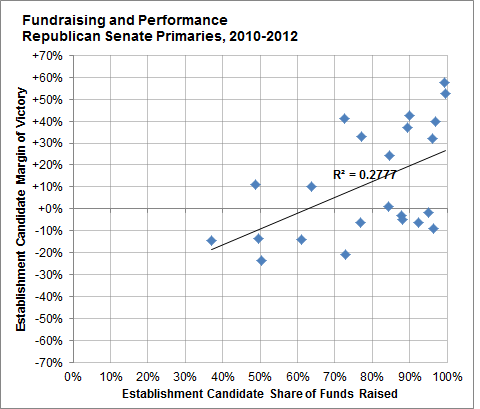 However, the relationship is much weaker than it is in general elections for the Senate, when fund-raising totals have about twice as much power to predict the margin between the Democratic and Republican candidates. (The chart below reflects all Senate general elections between 1990 and 2010 in which both the Democratic and Republican candidate were viable enough to have filed at least one F.E.C. report.) 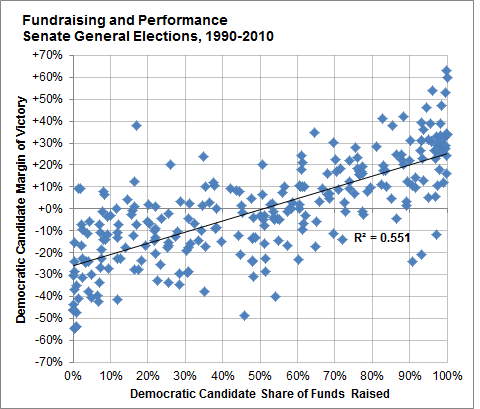 Moreover, it is not clear that the correlation implies a strong causal link. Better fund-raising totals can serve as evidence that a campaign is well-organized, or has more grass roots support, which are indicators of candidate strength regardless of how the candidate actually deploys her financial resources. But if a superPAC spends a large sum in support of a candidate — or a candidate makes a large contribution to her own campaign — that money may not go far if the candidate is otherwise having a difficult time persuading voters of her merits. (Largely self-funded candidates, such as Linda McMahon of Connecticut and Carly Fiorina of California, have poor track records in recent years despite having gargantuan budgets.)

This may hold especially true in Senate primaries because they usually feature very light turnouts. (Ms. O’Donnell’s win over Mr. Castle in 2010, for example, came with a turnout of only about 58,000 voters in Delaware, representing about 30 percent of Delaware’s population of registered Republicans and less than 10 percent of Delaware registered voters of all parties.) The voters who do turn out in Republican Senate primaries are likely to be highly informed consumers of conservative-friendly news media outlets such as talk radio, prime-time shows on Fox News and conservative magazines and blogs. They may also weigh the endorsements of prominent conservative politicians and organizations. An insurgent candidate who is presented in a favorable light in these outlets may have plenty of ability to reach her target voters, even if she is spending little or nothing on paid advertisements and outreach efforts.

Mr. Rove’s efforts could backfire, therefore, if they result in the insurgent candidate receiving more sympathetic treatment through these channels; the amount of so-called “earned media” that the insurgent receives could outweigh the extra advertisements that the establishment candidate is able to afford.

A related problem is that the insurgent candidates could seek to raise money directly in response to moves by Conservative Victory Project, as Mr. King of Iowa is attempting to do. This could be the case especially when insurgent candidates were otherwise having trouble raising funds.

My analysis of fund-raising data, in this context and others, has found that it is generally the proportion or ratio of funds raised by each candidate that has the most power to predict races, rather than the absolute amounts. This is a consequence of the diminishing returns of campaign spending: the first $100,000 of spending goes a lot further in establishing a candidate’s viability than the marginal $100,000 after she has already spent $5 million.

The intuition is simply that it may be dangerous to raise the profile of an insurgent candidate for whom a little extra money and exposure could go a long way.

Where might Mr. Rove’s efforts be more likely to achieve their desired goals? One case would be in multiple-candidate primaries where there are two or more establishment-backed candidates running against one insurgent. This eventuality has come up quite frequently in recent years, such as in the Nevada primary in 2010 and the Missouri primary last year, when the insurgent candidate was able to win with 40 percent or less of the vote. By directing money to one of the establishment candidates at the expense of the other, Mr. Rove’s group could force the insurgent candidate to win an actual or near-majority of vote rather than a mere plurality.

The money raised by Mr. Rove’s group might also be more likely to help candidates if it is directed toward functions other than advertising which have a lower public profile, although coordination rules related to super PACs can limit such efforts.

But the money may be less likely to help if Mr. Rove’s group hopes to save struggling candidates through a barrage of advertisements late in the race. Republican voters have already been rejecting these candidates despite their overwhelming advantage in paid media placements, and often because they are viewed as too much a part of the Washington establishment. It will take more than a new super PAC for Mr. Rove to earn back their trust.

An earlier version of this post referred imprecisely to the support a candidate receives from a PAC. While the political action committees can raise and spend money on behalf of a candidate, the candidate does not add the money directly to his or her campaign coffers.