Yet these surveys largely reinforced what our polling averages already showed: Biden has a sizable edge over President Trump in the states that are most likely to be the tipping point in the Electoral College, and he leads or is running even with Trump in some states that leaned Republican in 2016. As a result, Trump’s much-ballyhooed Electoral College advantage doesn’t look strong enough to save him — for the moment, at least.

The Times/Siena is one of the most highly-rated pollsters in FiveThirtyEight’s Pollster Ratings — one of six with an A+ mark — so these new surveys did adjust our averages a bit, most notably in Pennsylvania. There had been few high-quality polls conducted in the Keystone State, so our polling average did shift roughly 1.5 points in Biden’s favor because of the Times/Siena survey, which found Biden up by 10 points. 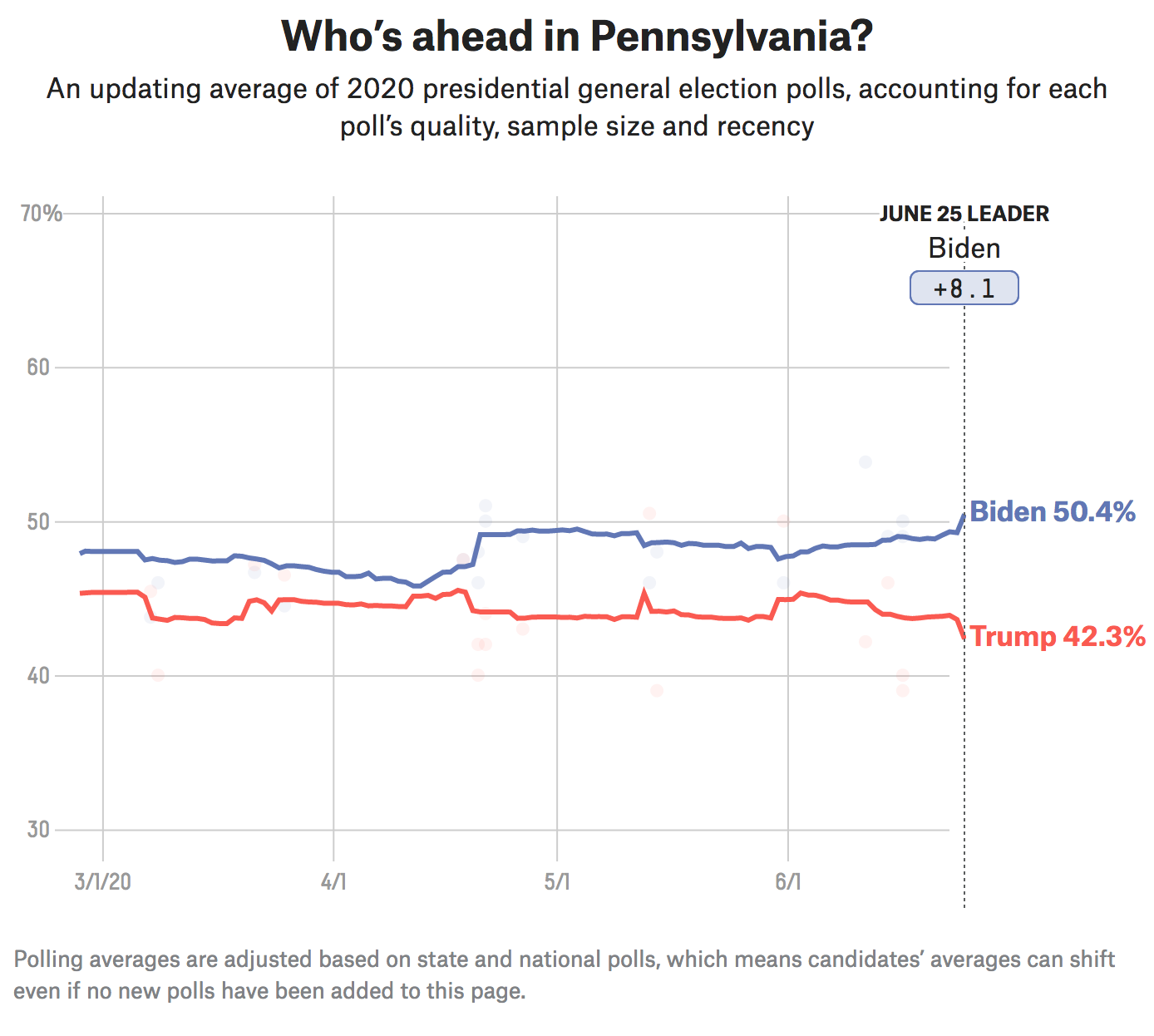 It wasn’t just the Times/Siena survey that found Biden up, either. We got two more polls of Pennsylvania today that showed Biden with double-digit leads. One from GOP pollster Hodas & Associates gave Biden a 12-point lead, and one from Redfield & Wilton Strategies put him up 10 points.

The new Times/Siena polls also bumped Biden’s margin up about a point in three other states: Michigan, North Carolina and Wisconsin. As a result, Biden’s average leads in Michigan and Wisconsin now exceed his national advantage. North Carolina, on the other hand, remains somewhat to the right of the country, but Biden still has about a 3-point lead. This marks a big change for Wisconsin, too, as up until this point, it had been more Republican-leaning than the country as a whole despite Biden’s lead there.

The other thing to note here is that Biden is above 50 percent in Pennsylvania, Michigan and Wisconsin. This is significant because even though Hillary Clinton led in these states at points in 2016, she never crossed the 50 percent threshold. That speaks to just how durable Biden’s lead might be.

But perhaps what’s even more significant about this batch of recent polls is that Trump’s possible Electoral College advantage is slipping. Biden doesn’t lead by as much in most of the battleground states as he does nationally, but his leads are big enough — anywhere from 5 points in Arizona to 9 points in Nevada — that it won’t matter that many battleground states lean to the right of the country.

Take Biden’s leads in Pennsylvania, Michigan and Wisconsin. Those three Frost Belt states were each decided by less than 1 point in the 2016 election, yet Biden leads them all by at least 8 points. That gives him a firmer grip on the Electoral College. The race, of course, could narrow in the coming months, but as the Times/Siena surveys found, Biden also has a sizable edge in states such as Arizona and Florida, which means even if his position weakens in the Midwest — perhaps some white Republican-leaning voters come home to Trump — Biden’s strength in other parts of the country might be less affected and still give him a path to victory with 270 electoral votes.

And the fact that Biden now has multiple paths to the White House is the biggest problem facing Trump. He needs a notable shift in voter sentiment that makes the national environment less favorable for Biden. With four months to go, that’s quite possible, but at the moment, our polling averages suggest that he’s in a lot of trouble.