The following is a map of the relative performance of Barack Obama to John Kerry. If a state is colored blue, that means Obama is outperforming Kerry in his current polling avarages. If it’s red, John McCain is outperforming George W. Bush. 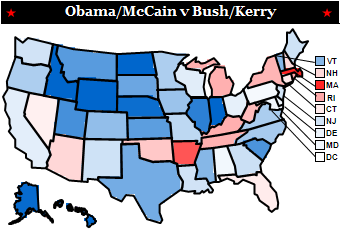 Note that these results are based on the polling numbers only — they do not include the regression -based component of our state-by-state ratings.

EDIT: One way to characterize the states where McCain is performing materially better than Bush: