New Jersey and Virginia are similar states in many respects. Both are wealthy and suburban. Both live in the shadow of large cities — New York, of course, in New Jersey’s case, and Washington in Virginia’s. Each has its “white ethnic” population — the conservative-leaning Scots-Irish lineage that dots rural Virginia, and the working-class-Democrat Italian and Portuguese-American families that populate New Jersey (herein lies the difference between the two states electorally). Both have their share of minorities, who may or may not turn out in midterm elections.

But the outcome of the gubernatorial contests in the two states yesterday was very different — even though both were won by Republicans.

In New Jersey, you had an extremely unpopular incumbent — Jon Corzine — who had never particularly clicked as a governor, and who’s approval ratings crossed into the red in February, 2008. In Virginia, you had an open seat race to replace an outgoing, and in fact fairly popular Democratic governor. 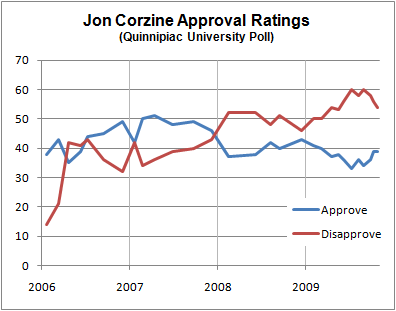 In New Jersey, you had an electorate that gave Barack Obama a 57 percent approval rating — the identical fraction to the 57 percent that elected Obama last November. In Virginia, Obama’s approval rating was 47 percent, a significant drop from the 53 percent of the vote that he earned.

In New Jersey, it was Jon Corzine who tried to nationalize the race, making sure that everyone knew that Chris Christie was a Republican. And insofar as this went, it worked: voters who said their main issue was health care went for Corzine 78-19 (!), according to exit polls, and he won voters focused on the economy and jobs 58-36. Christie won because he focused on two local issues that are very important to New Jerseyans — corruption and property taxes, and won overwhelmingly among voters who keyed in on these issues. In Virginia, meanwhile, it was Bob McDonnell who won the economy voters — 57-42, and the candidates split the vote among those most concerned about health care.

In New Jersey, 27 percent of the electorate was nonwhite, exactly identical to the proportion from a year earlier. In Virginia, the percentage of nonwhite voters dropped from 30 percent to 22.

In Virginia, the Republicans swept the downballot races, and are projected to have made a net gain of five seats in the House of Delegates. In New Jersey, Democrats are only expected to lose one seat in the state’s legislature.

Most obviously of all, in New Jersey you had a candidate losing by 4 points, while in Virginia you had one losing by 18. In New Jersey, you do have to pick and choose an explanation for Corzine’s defeat — and the evidence points overwhelmingly toward local factors. In Virginia, it would be irresponsible not to pick all-of-the-above: absolutely, Deeds was a poor candidate and McDonnell a good one; absolutely, Democrats had huge turnout problems; absolutely, Virginia has a tendency to be counter-cyclical in its gubernatorial elections. But absolutely also, national issues played a role, and damaged the Democrats.

Ironically, though, because the outcome in Virginia was not close and the one in New Jersey was, it’s the latter race that has received more attention. And many of the explanations that actually do apply to Virginia — where Creigh Deeds got clobbered — have been superimposed onto the Garden State, with no basis in the evidence. I live in Brooklyn and watch sports every Sunday and saw every freakin’ one of Chris Christie’s commercials a dozen times over, the only redeeming facet of which was that there were moderately less putrid than Corzine’s. Not once did Christie mention Nancy Pelosi or Harry Reid or the Democrats’ health care plan or the stimulus package — and a good thing he didn’t, since this wasn’t what New Jerseyans were concerned about.

If you’re a Chief-of-Staff for a conservative Democrat in Congress, you have two relevant data points to look at from Tuesday: Virginia, which is undoubtedly a little scary, and NY-23, which ought to be rather relieving. Certainly, there were a whole host of local factors and unusual contingencies on the ground in NY-23. But it also spoke to the limitations of conservative populism (CP) as an electoral instrument. (You can call the CP’s ‘teabaggers’ if you want, but my term is both more neutral and more descriptive.) There’s not really any evidence that the CP movement is yet anything more than an isolated and regional one. It will almost certainly have some implications in the South — and if I were a Democratic Congressman there, I’d be very nervous. But only 18 of the 52 Blue Dogs in fact come from the South, and if I were a conservative Democrat in California, or South Dakota, or Michigan, I’d be feeling rather relieved.