Last week, the ongoing debate over what we know about the tea partiers took a new turn, with scores of conservative commentators like The LA Times’ Andrew Malcolm and Glenn “Instapundit” Reynolds assuring us that a new Gallup poll proves the TPers are not a “fringe” or “racist” group. 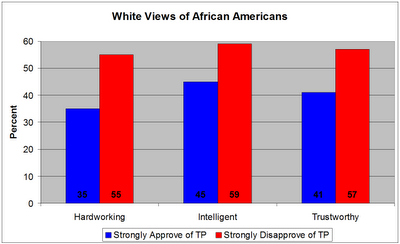 But the Gallup results only confirm that tea partiers are “mainstream” in their demographics, when what really matters are their attitudes. Results released Friday of a new multi-state poll of white voters conducted by the University of Washington’s Christopher Parker paint a more complicated picture. The survey asked white respondents about their attitudes toward the tea party movement–and their attitudes toward non-whites, immigrants and homosexuals. 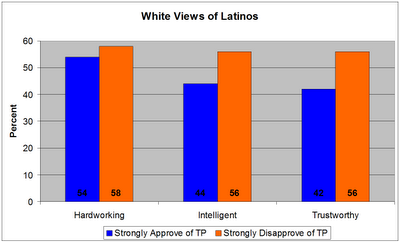 The charts contained herein show the disparity between whites who strongly approve and disapprove of the tea party movement. In a few cases — attitudes toward Latinos, for instance — the differences were small. But only in a few cases: tea party sympathizers believe blacks are less intelligent, hardworking and trustworthy. They appear to be particularly wary of immigrants. And they don’t much care for gays, either. (Although note that two-thirds of them support gays in the military, an issue on which policy has long lagged public sentiment.) 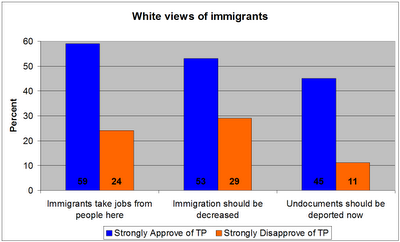 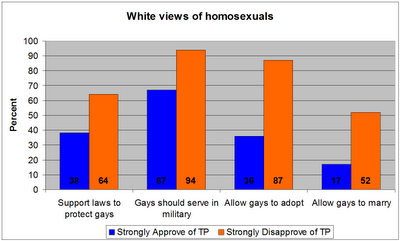 Some conservatives believe there is a systematic attempt to demonize the tea party movement and their supporters. There is probably some truth to that. But in the same vein, aberrant opinions espoused by tea partiers or their sympathizers should neither be ignored nor papered-over.

Parker’s study shows much higher levels of intolerance among whites who sympathize with the tea party movement. To be clear, the splits compare those who strongly disapprove or approve of the tea partiers, so the differences reflect those whites with polarized attitudes toward the movement. And the study might be more instructive if it compared compared the tea-partiers views toward those of white conservatives or white Republicans, or differentiated between those who are merely empathetic toward the tea-party movement and those who have actively participated in it. But it’s safe to say that those who are sympathetic to the tea party movement do not hold mainstream views on issues related to race and identity politics.