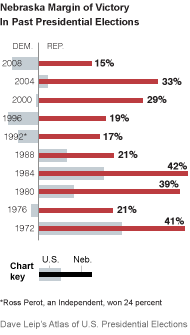 The most impressive victory of President Obama’s 2008 campaign may have also been the most minute: he won a single electoral vote by a single percentage point in Nebraska’s Second Congressional District. (Nebraska is one of two states, along with Maine, that awards electoral votes by Congressional district.)

Nebraska’s Second District was the reddest electoral vote Mr. Obama carried in 2008. It falls to the right of traditionally Republican states like North Carolina and Virginia on FiveThirtyEight’s Presidential Voting Index and was the farthest Mr. Obama was able to penetrate into G.O.P. territory.

But after the election, Nebraska Republicans responded with a fairly simple strategy. They moved the Second District even farther behind the battlements, redrawing the district lines after the 2010 Census to make it more Republican and “avoid what they considered to be the debacle of losing the seat to Obama in 2008,” Mr. Landow said.

The Second District’s new boundaries make it more likely that all five of Nebraska’s electoral votes will go to Mitt Romney this year. As a whole, Nebraska is among the most conservative states. In the last half-century, only Utah has favored G.O.P. presidential candidates by consistently wider margins. 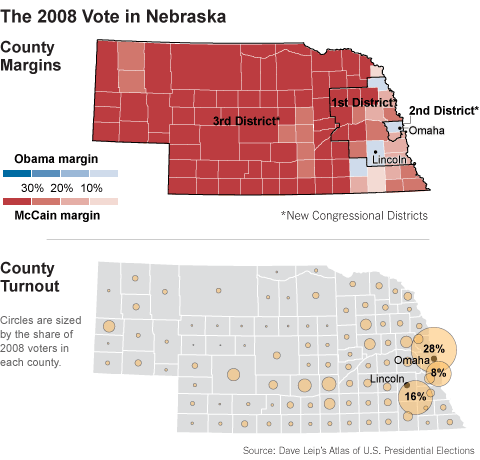 Nebraska is rural, mostly white and fiscally and socially conservative. It is similar both geographically and ideologically to its southern neighbor, Kansas. Western Nebraska, the Third Congressional District, is almost uniformly Republican. It is sparsely populated, with vast empty expanses broken by the occasional ranch or rail yard.

The eastern fifth of Nebraska, the First and Second districts, are more developed. More consistent rainfall allows for better farming. But the region is still lightly populated and heavily Republican. In presidential elections, Democrats are competitive in just a few areas: Lancaster County, which includes the state capital, Lincoln, and the main campus of the University of Nebraska; Thurston County, which is majority Native American but has only several thousand residents; and the Second District, anchored by Omaha.

The geography is important. Both Douglas and Sarpy counties are more Democratic-leaning in the east, Mr. Landow said, transitioning from urban and suburban to exurban and rural as you travel from east to west. So when Nebraska Republicans redrew the district lines, they flipped Sarpy County around, moving the western half into the Second District and the eastern half into the First District. The First District is more Republican than the Second District, so it could safely absorb some Democratic voters.

“A lot of working-class Democrats in eastern Sarpy County were taken out of the Second District,” Mr. Landow said.

(To see how the districts changed, go to Govtrack.us, which has a useful map where you can toggle back and forth between the old and new boundaries. See here).

Omaha’s Democratic constituencies are substantial but not overwhelming. Douglas County is 12 percent black and 12 percent Hispanic. One of the main industries in the area is food processing, including meatpacking, which employs blue-collar, Democratic-leaning voters, Mr. Landow said. 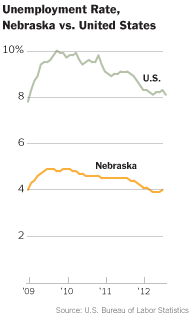 “It’s the closest thing we have to a competitive region of the state,” Mr. Hibbing said, “but I still wouldn’t classify it as quite competitive because it is really hard for Democrats to do well there.”

Dodge County, to the northwest of Omaha, has come within a couple percentage points of the statewide vote in the last three presidential elections. It is mostly rural and mostly Republican, like Nebraska as a whole. But Dodge County also includes a decent-sized town, Fremont, which has a small but growing university, Mr. Hibbing said.

Mr. Romney is a 100 percent favorite to carry four of Nebraska’s five electoral votes, according to the current FiveThirtyEight forecast. He should win the two statewide votes as well as the votes awarded to the winner of the First and Third congressional districts.

Republicans are likely to maintain their advantage in the Cornhusker State for the foreseeable future. Like Kansas, Nebraska has been moving to the ideological right over the last two decades. In addition, the state’s economy is in excellent shape, and its population is mostly stable, Mr. Hibbing said.

The only demographic change with the potential to help Democrats is an influx of Latinos, who have moved to Nebraska for jobs in agri
culture and food processing. In 1990, the state’s Hispanic population was just 2 percent. Today, it is almost 10 percent. But, as in Kansas, the Latino population in Nebraska has yet to make an impact politically.

Mr. Obama is facing more headwinds in 2012 than he was in 2008 and would likely have had difficulty retaining Nebraska’s Second District even if it had not been redrawn. He carried it by just 3,370 votes in 2008.

In its new, more Republican-leaning shape, the Second District is an even tougher place for Mr. Obama to repeat his 2008 success. Mr. Romney is a 94 percent favorite there, according to the current forecast.