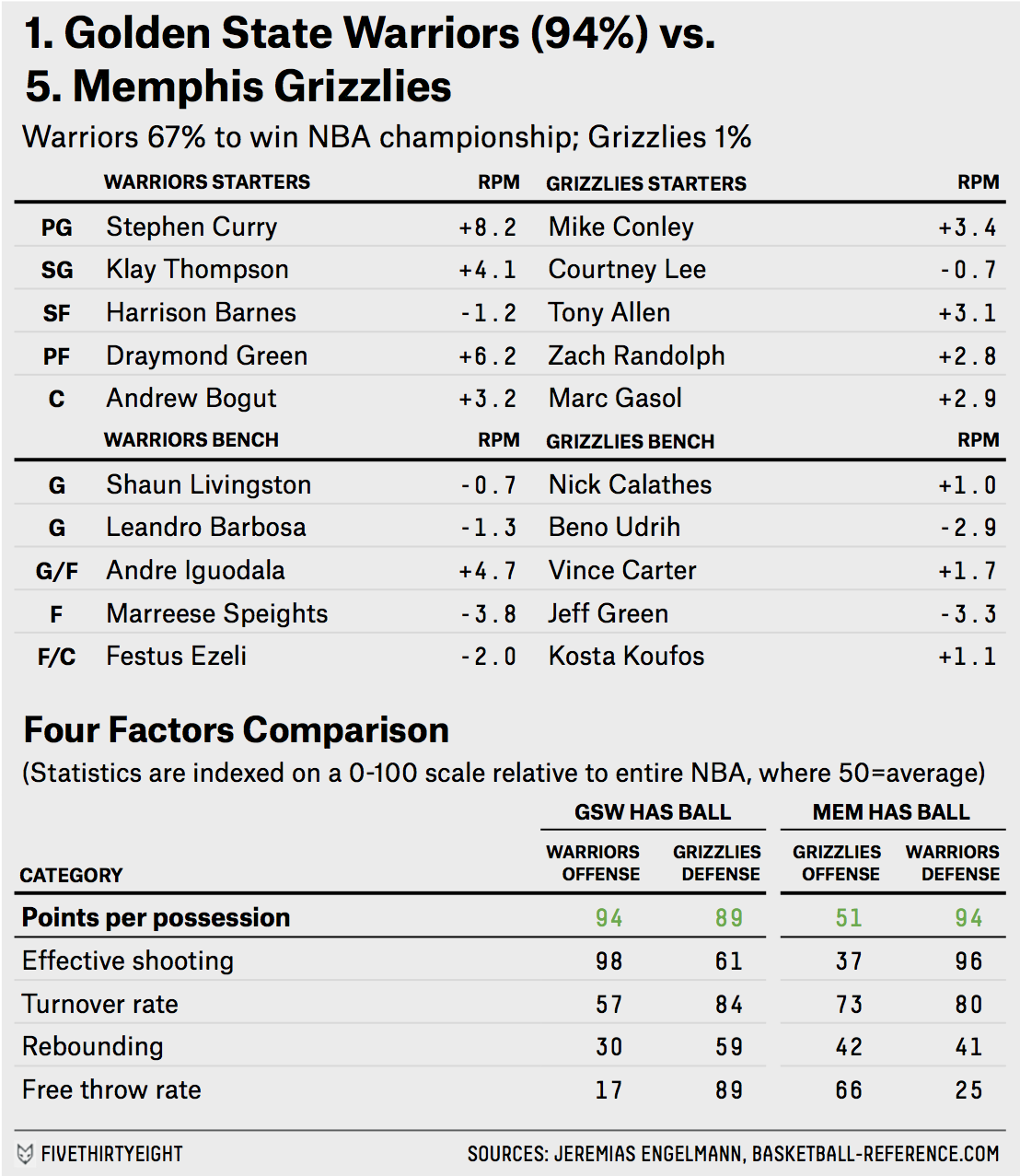 The Golden State Warriors are an insanely dominant team. To answer the question in this article’s headline: Yes, the Grizzlies have a chance — about a 6 percent chance according to our Real Plus-Minus-based projections. The Warriors projected Real Plus-Minus (RPM) of +15.8 points against the Grizzlies is easily the best of any team; Golden State has about a 10-point advantage per 100 possessions.

So the Warriors are likely to win, yes, but the series has several interesting contrasts for the basketball geek.

Take speed. If the Warriors do succeed against Memphis, they’ll probably do so playing their breathtakingly fast style. Golden State had by far the fastest pace in the league this season, at 98.3 possessions per game. The Grizzlies play at a lumbering gait: at 92.0 possessions per game, Memphis ranked in the bottom five of the league. The Warriors are also in the top four in total blocks and steals, which ignite fastbreaks. The Grizzlies are content playing solid half-court defense, forcing turnovers and limiting your total shots. It’s fast vs. slow.

Shot selection is another difference. The Warriors, especially Stephen Curry and Klay Thompson, excel behind the 3-point arc. The team led the NBA in both 3-point percentage (at nearly 40 percent!), and in the total number of threes attempted. The Grizzlies? They attempt the second fewest 3-pointers of any team in the NBA, with below-average success. Memphis’ strength is near the basket, where you’ll find their two big men, Marc Gasol and Zach Randolph. It’s outside vs. inside.

Curry, who might just win the MVP award, leads the way for a stacked Warriors team; his projected +8.8 RPM is the second highest of any player (behind Cleveland’s LeBron James). At the other end, the Warriors will rely on defensive superstar Draymond Green, the runner-up for Defensive Player of the Year. Draymond will have a unique challenge against the two Memphis big men. If he can handle one of them one-on-one, the Warriors could cruise.

For the Grizzlies, their (already slim) chances took a hit when point guard Mike Conley suffered a facial fracture. He’s projected to play only 15 minutes per game by these RPM calculations. But if he plays through the injury, and if the Grizzlies can slow the pace and prevent the 3-point-happy Warriors from blowing the roof off, Memphis could make this series interesting.