We’re inaugurating our NBA player projection system, CARMELO, with 2015-16 season previews for every team in the league. Check out the teams we’ve already previewed here. Learn more about CARMELO here.

The Boston Celtics didn’t just bring back 10 players from a second-half hot streak, they also added veteran big men David Lee and Amir Johnson to their roster. You’d have to be chugging the green Kool-Aid to expect Boston to maintain its second-half pace — the Celtics’ 24 wins in 36 games would put them at 55 wins (?!) on the season — but most fans do expect them to take another step forward after a 40-win season. For the first time in his brief NBA career, coach Brad Stevens will endure the burden of expectations, and that will start with getting this team back to the playoffs. Until GM Danny Ainge starts using the team’s surplus of future draft picks, Stevens will have to get there without an obvious superstar at the helm of his roster.

Even without that superstar, FiveThirtyEight’s CARMELO1 expects the Celtics to go 48-34.

Here’s what is in store for the key Celtics players in 2015-16 (you can find Boston’s entire roster — and every other NBA player — here): 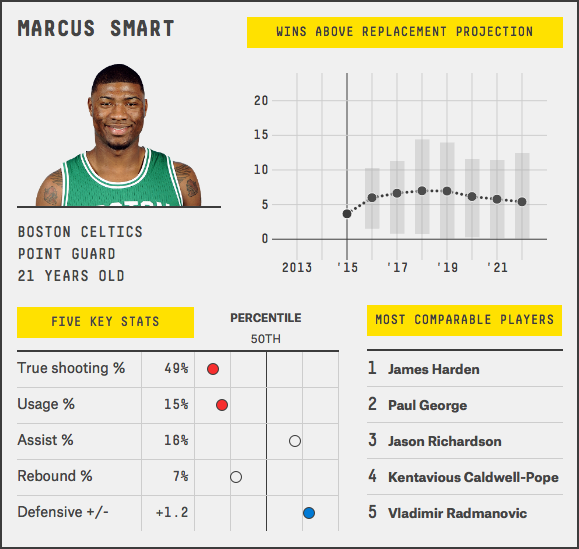 You had Celtics fans at James Harden, CARMELO (and Paul George isn’t a comp Boston fans will sneeze at, either). OK, so Marcus Smart’s encouraging projections probably aren’t enough for Ainge to call off the hunt for an elite talent, but Smart, the No. 6 pick in the 2014 draft, is clearly Boston’s best hope for a homegrown star. He’s already a defensive menace, the question is whether he can confidently run an NBA offense. 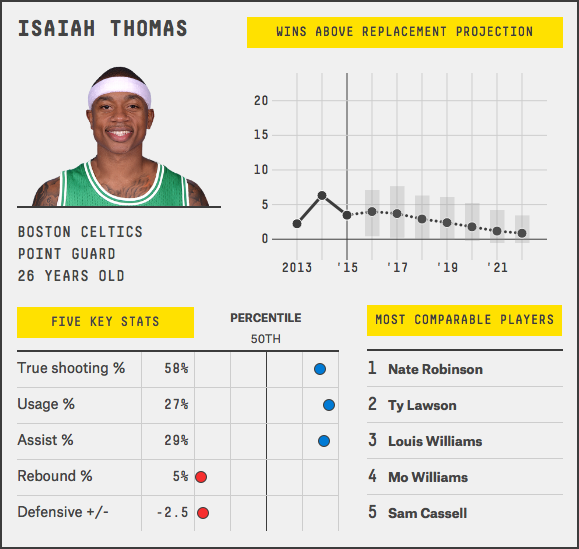 Nate Robinson as the top comp? Is CARMELO making height jokes? (Even better, the Celtics traded away Robinson in 2011 as a throw-in to the Jeff Green/Kendrick Perkins deal.) It’s interesting that projections suggest that Isaiah Thomas will maintain his 2014 offensive impact, but regress defensively. The Celtics did a good job of masking Thomas’s defensive deficiencies by often putting versatile, defensive-minded players around him. Thomas was the main reason for Boston’s second-half surge last season, and he is the straw that stirs the drink. 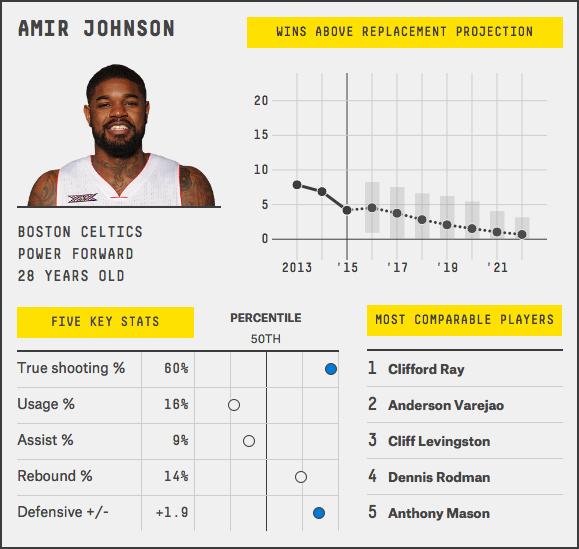 CARMELO is not kind to Amir Johnson, who is typically an advanced stats darling. The Celtics signed Johnson for two years at $24 million because they believe he’ll give their defense a boost with pure hustle and an ability to help protect the rim. 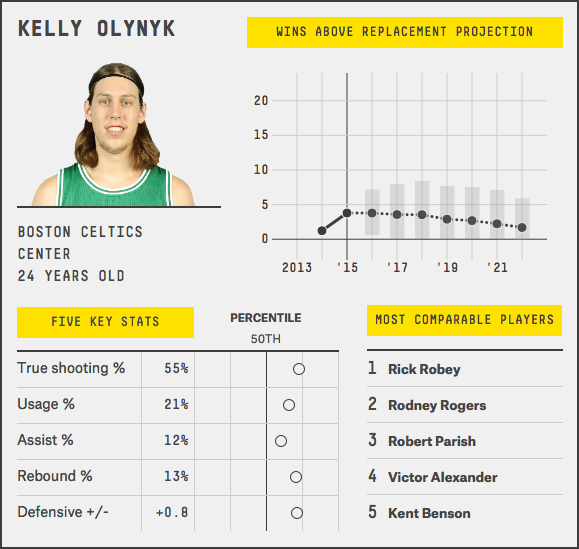 CARMELO is bullish on Kelly Olynyk, the 7-foot Canadian with flowing hair. So are the Celtics when he doesn’t hesitate with his shot and emerges as a floor-stretching weapon. 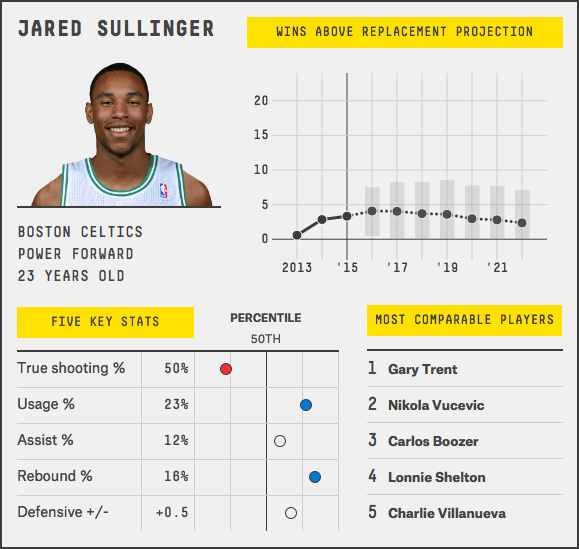 Jared Sullinger must prove he’s capable of staying healthy in what amounts to a contract year. 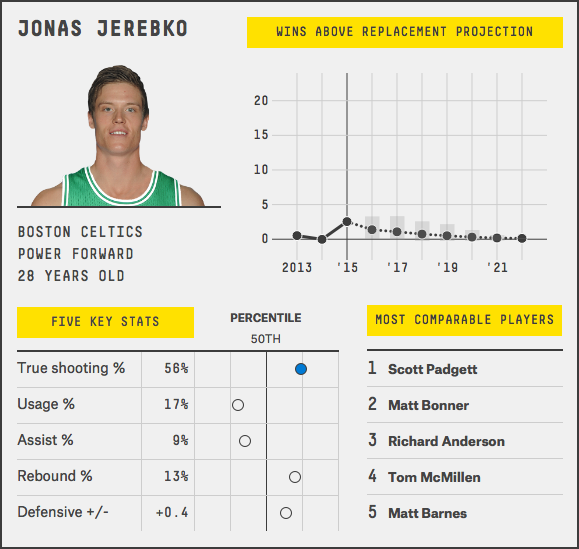 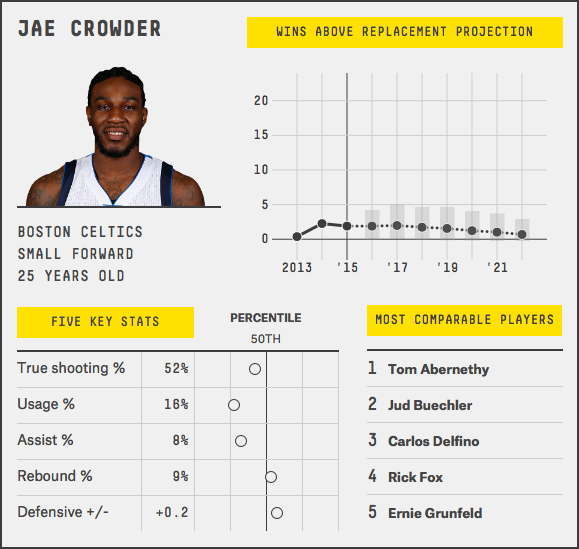 The Celtics love Jae Crowder’s intangibles and believe they got much more than a $35 million Jud Buechler in re-signing Crowder to a long-term deal this summer. 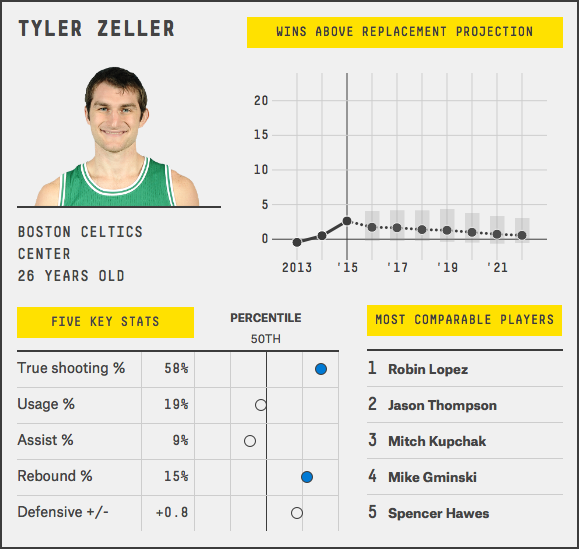 The Knicks signed top comp Robin Lopez to a four-year, $54 million contract this summer, so maybe Boston ought to consider a reasonable extension with Tyler Zeller before the end of October if he fits the team’s future plans.

Chris Forsberg writes about the Boston Celtics for ESPN. @ESPNForsberg