Collins last took the court as a member of the Brooklyn Nets a season ago, when he became the first openly gay active player in the history of North America’s “big four” professional sports leagues.

“It feels wonderful to have been part of these milestones for sports and for gay rights, and to have been embraced by the public, the coaches, the players, the league and history,” Collins wrote in Sports Illustrated this week.

Collins’s most important legacy will be as a trailblazer for the LGBT movement, but his retirement also deserves a footnote for his status as one of the first “hidden” stars of the NBA’s advanced stats movement.

In 2005, Collins headlined a group of unsung players whose value was only beginning to emerge via a new metric known as adjusted plus/minus (APM). Controlling for every other player on the court (for both teams), APM attempted to determine how much effect an individual had on his team’s per-possession scoring margin. And Collins, whose meager per-game averages would normally render him invisible to statistical analysts, had a far greater one than his conventional stats would suggest.

“According to [APM expert Dan] Rosenbaum’s calculations, Collins is not a stiff at all but one of the NBA’s premier defensive centers: the fourth-most effective in the league over the last three seasons,” SI’s Chris Ballard wrote before the 2005-06 NBA season. “Over the last three seasons the Nets have been remarkably more effective at the defensive end with Collins in the lineup; they foul less, allow fewer free throws, rebound better and allow fewer points. ‘He’s very consistent and consistently very good,’ says Rosenbaum, ‘meaning he’s either the luckiest center alive and teams just fall apart when he’s on the court, or he’s doing something.'”

According to regularized APM (RAPM), a Bayesian version of APM that forms the basis of ESPN’s new Real Plus/Minus stat, Collins continued to be an above-average on-court presence for one more season. (Then, the negative effect of his nonexistent offensive contributions began to outweigh his elite defense.) But over the 2001-2014 period for which Regularized APM can be calculated, Collins came out as a net positive (+1.6 points per 100 possessions) relative to the average NBA player.

For a player who averaged merely 3.6 points and 3.7 rebounds per game over his career — with a lifetime player efficiency rating (PER) of 7.0 — that’s an astonishing accomplishment. If we map every player’s RAPM (minimum 10,000 minutes played) against that which we would expect solely from his PER, a useful per-minute proxy for the conventional statistical perception of a player, Collins comes out as the NBA’s most underrated player of the past decade and a half. 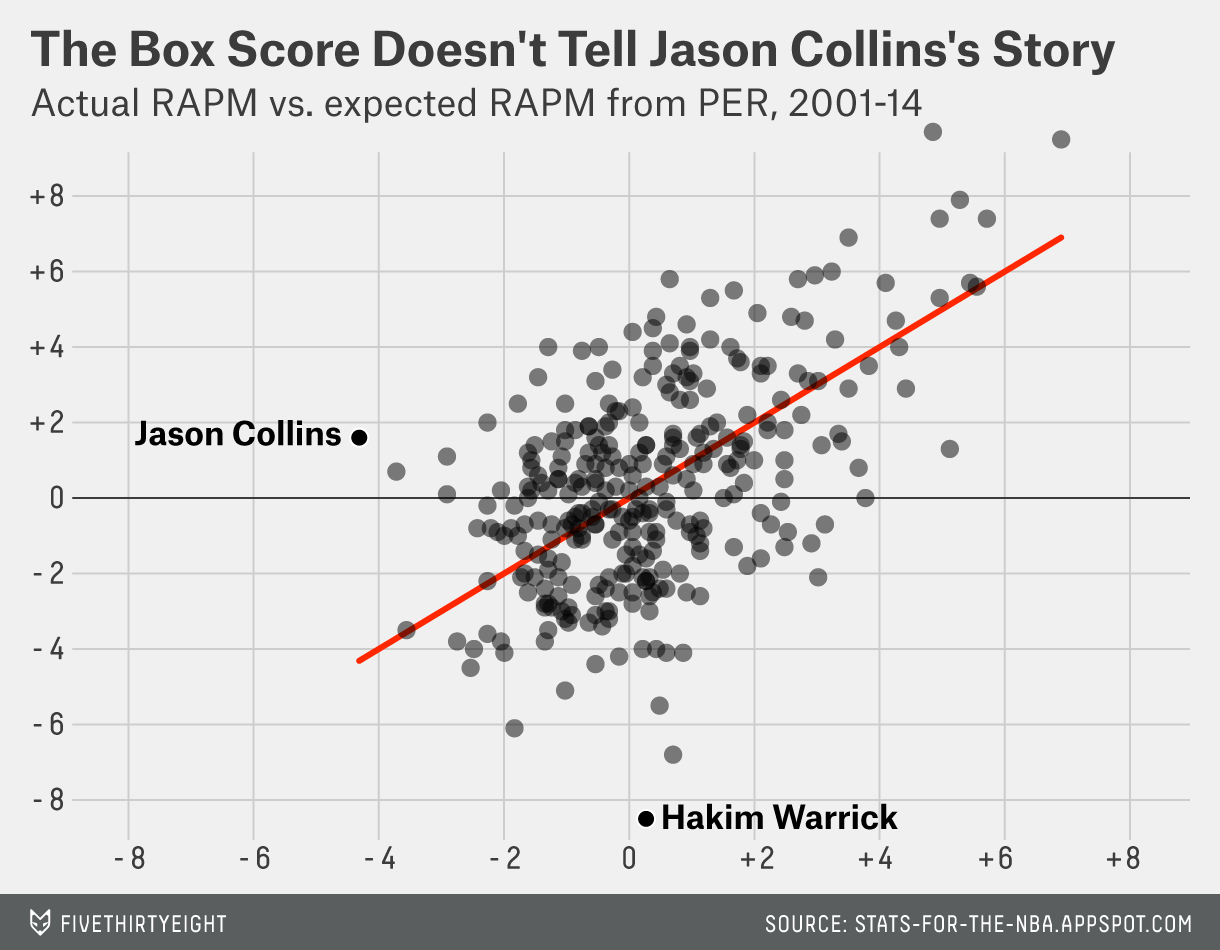 For more reasons than one, Collins was a player whose impact on the NBA can’t be divined from the box score alone.