The way U.S. cities move around natural gas may be contributing more to climate change than anyone appreciated: The pipes are leaking, and some are leaking a lot.

About a third of the natural gas we consume is delivered to homes and businesses, where it fires appliances like furnaces, boilers, ovens and cooking stoves. To transport this gas, most urban areas have extensive networks of underground pipelines, many of which were built decades ago. Although big leaks are hard to miss (they smell), small leaks can go undetected. How much natural gas leaks out before it gets to the furnace in your basement? Until recently, no one had thought much about this.

But one research group has pioneered the study of urban gas leaks by driving around cities, first Boston and then Washington, D.C., with equipment that can sniff out natural gas leaking from pipelines. The researchers found plenty of leaks: more than 3,000 individual leaks in Boston and nearly 6,000 leaks in D.C. Although few were concentrated enough to be an explosion risk, all leaks warm the climate; natural gas is mostly methane, which has a stronger climate-warming effect than carbon dioxide in the short term, as I discussed in a recent article.

You might think that the public utilities supplying the gas would have an economic incentive to reduce leaks and avoid losing a valuable product, but the reality is the opposite.

The Washington study assembled data from the 174 largest urban gas distribution systems in the United States and found a wide range of loss rates: 0 percent to 11 percent, with an average of 1.6 percent. (Note that a small quantity of the gas labeled as “lost” could be due to metering errors, rather than actual gas leaks.) 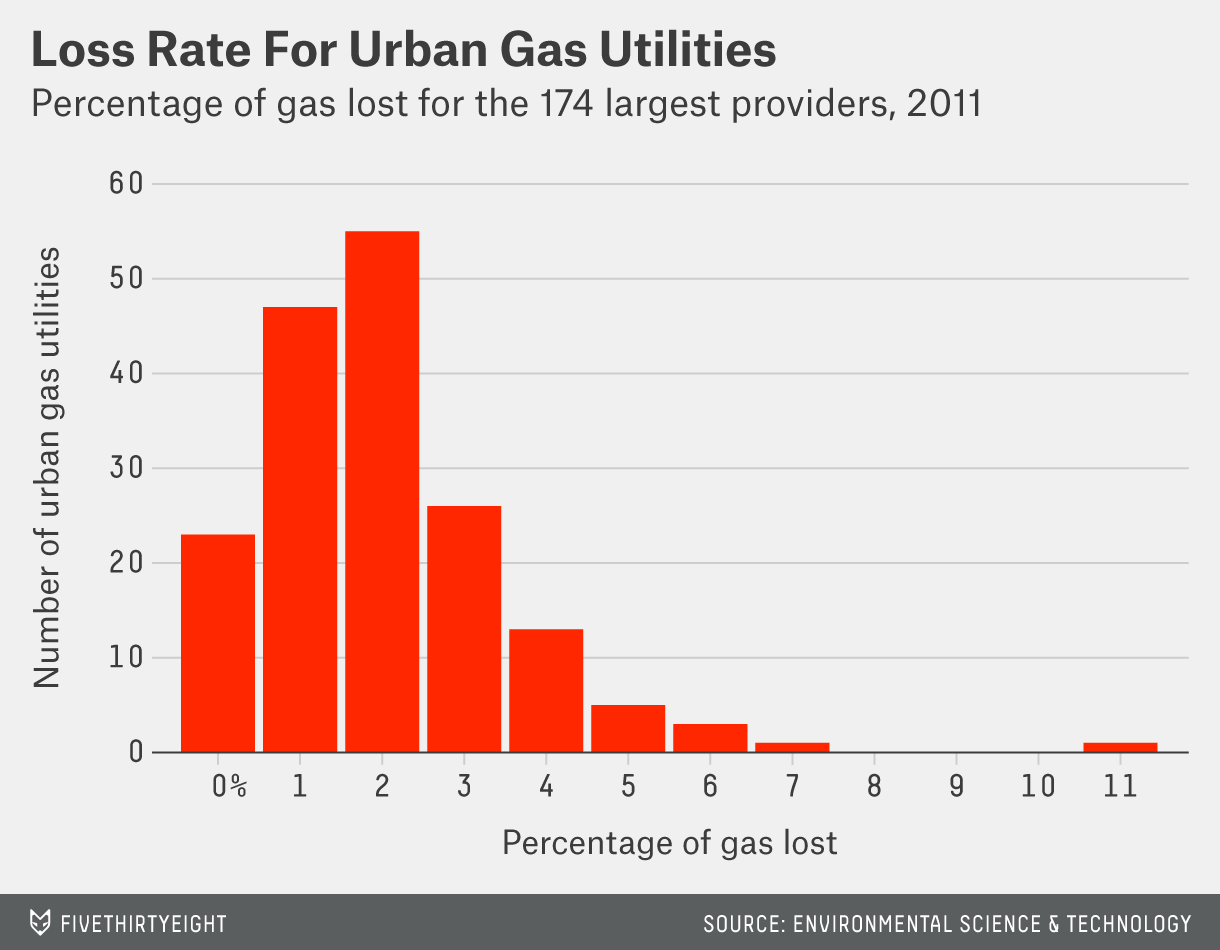 Plugging the leaks would be no small feat — urban gas pipelines across the country are decades old, and are just one of many items on America’s lengthy to-do list of repairs to aging infrastructure. As Andrew Flowers has reported on this site, we can’t afford all of these repairs in the current political and budgetary climate.

The results of the Boston study hint at one way to prioritize efforts to repair leaky urban gas pipeline systems. The Boston neighborhoods with the most gas leaks were also those with the most pipes made of cast iron, which is older and more prone to rust than newer pipeline materials. This suggests that cities with more cast-iron pipes are probably leaking more gas. Replacing these leaky cast-iron pipes would have multiple benefits: Reduced climate effects, increased safety and cost savings for customers.

But that last statement highlights the crux of the problem: The customers are the ones currently paying for lost gas — we’re buying it, essentially. In fact, if a municipal utility reduced pipeline leakage, it would see no increase in revenue because the cost of the lost gas was already being recovered through fees paid by consumers.

Clearly these economic incentives are backwards, and one solution is for state governments to implement programs to change them. New Hampshire, for instance, has had cast-iron replacement programs in place since 1996.

In 2012, President Obama signed a Pipeline Safety Act that called for the federal Department of Transportation to inventory cast iron pipelines in each state and to monitor states’ progress on replacing them. But the states have a long way to go. A 2011 report by the DOT office that tracks pipelines (the PHSMA) found that 80 percent of cast-iron pipes are located in just 10 states, but most of these states are replacing cast iron at a glacial pace, and some have no replacement program at all. Pennsylvania, for example, is scheduled to replace its last cast-iron pipe in the year 2111.